Why Do NYC Community Boards Have So Little Power?

If you've never attended a NYC community board meeting, allow me to set the scene: they are monthly affairs often lasting as long as three hours, and are typically filled with lengthy arguments about internal protocol, debates over new developments, and the occasional angry outburst or bit of intel from elected officials. The city's 59 boards discuss and vote on matters ranging from liquor licenses to rezonings and transportation improvements, and the conversations can get quite impassioned—but ultimately the votes don't usually mean that much, as the boards' roles are purely advisory.

The boards' lack of veto power was underscored during the recent controversy over Mayor de Blasio's rezoning plan, which 50 of 59 community boards rejected, but the City Council and City Planning Commission nonetheless approved. That prompted a livid response from anti-gentrification activists, who protested last month outside the Brooklyn Borough President's office, demanding that the boards be given veto power over land use matters to prevent rezonings and developments from going forward when there is clear community opposition.

The protestors made one other demand: that the boards be elected, not appointed, the idea being that this might help the boards be more representative of their communities' interests. Currently, each board's 50 volunteer members are appointed by the Borough President (BP), and half of them are recommended by the City Council member whose district corresponds to the given board. The other 25 spots are filled by applications submitted to the BP. It's been frequently noted that the boards aren't always representative of their communities—so, in their purely advisory votes, the boards aren't necessarily making recommendations that are in the communities' best interests.

This all raises the question: why can't the city's community boards veto proposals, and why aren't they elected rather than appointed?

According to those who study the history of city politics, the question of a veto vote really comes down to a power struggle between the boards, the borough presidents, and City Hall. Though, as sociologist David Rogers details in his chapter of Urban Politics, New York Style, when the boards were first created in 1975, they weren't even intended to be powerful, per se: "[p]eople wanted input into land use and service decisions. They wanted a place to go to register complaints...But they wanted the services to be performed by those responsible." 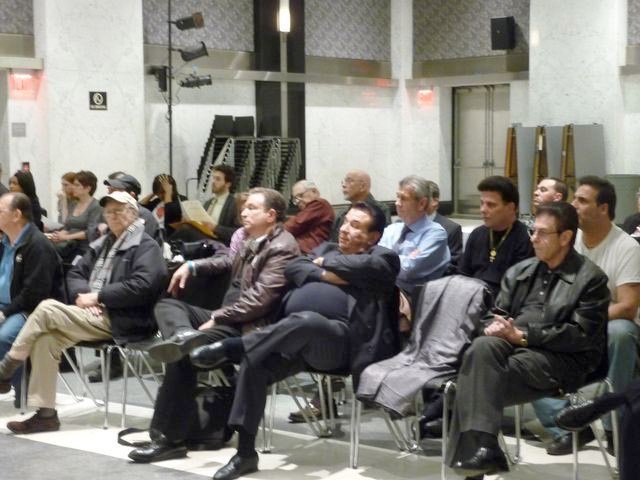 Feast of San Gennaro supporters wait their turn to speak at a Community Board 2 meeting in Manhattan. (Nell Casey / Gothamist)

Over the next decade, however, the boards' desire for a veto vote grew, as they found themselves faced with similar problems as they do today: despite their opposition to high-rise developments, the city was approving large developments such as an expanded Battery Park City and the MetroTech center in Downtown Brooklyn, which the community boards saw as detrimental to their neighborhoods. They wanted more power—but the mayor, then Ed Koch, didn't want to give it to them.

''I believe that having their input has improved many projects,'' Koch told the New York Times in 1987. ''But I believe if you gave them a veto position, nothing would be built in this town above three stories.''

That power struggle only intensified in the following years, according to Joseph Viteritti, who chairs the Urban Policy and Planning Department at Hunter College and worked on the commission that rewrote the city charter in 1989. That charter commission recommended eliminating the Board of Estimate, which comprised the mayor, the comptroller, the City Council president, and the borough presidents and had previously been responsible for voting on budget and land use decisions. The Board of Estimate had been one of the few places where the borough presidents had any real power—and so they weren't about to support handing it down to community boards. And now that power was more centralized in City Hall, the entities there weren't all that inclined to let 59 disparate community boards have a veto vote, either.

"It really gets to be, who wants to give away power," Viteritti said. "I don't think people have been inclined at the upper levels of government to do that."

On top of that, there's just never been enough of an outcry from community boards demanding more power: Viteritti said the idea comes up every time there's a new charter commission, which happens on average every three or four years, but it never really goes anywhere.

As for the question of elected community boards, Viteritti said the argument that elections would make the boards more representative doesn't quite hold up if you look at historical precedents. The closest example, he said, would be community school boards, which were abolished in 2002 when the state senate gave Mayor Bloomberg mayoral control of the city's schools. In the 30-plus years that they did exist, they were composed of parents who were elected to their positions on the board. But voter turnout was historically quite low, Viteritti said, and as a result, the boards weren't in fact all that democratic.

"They created the illusion of the democratic process, but with very low turnout," he said. "And now that we know that turnout is lower than it's ever been in mayoral elections, you have to ask yourself the question: what's the probability of having local boards that are really representative to an electoral process?"

Tim Thomas, who for the past five years has sat on Brooklyn's Community Board 9—the one specifically targeted by those at last week's protest—and has detailed much of the turmoil there on his blog, echoed this, saying he doesn't think much would change if the board seats were elected, and that it would be a huge investment of time and money for very little change.

"That sounds ridiculously costly and wasteful," he said—not to mention unrealistic: "Elected officials aren't going to want to cede some of their power to a bunch of locals." And, he added, the people currently on the boards are, for the most part, those who want to be involved in the first place: "Everybody else I talk to wants nothing to do with it. It's a lot of time, it's a lot of negative energy, and some people just don't want to talk about this stuff—it's too boring." 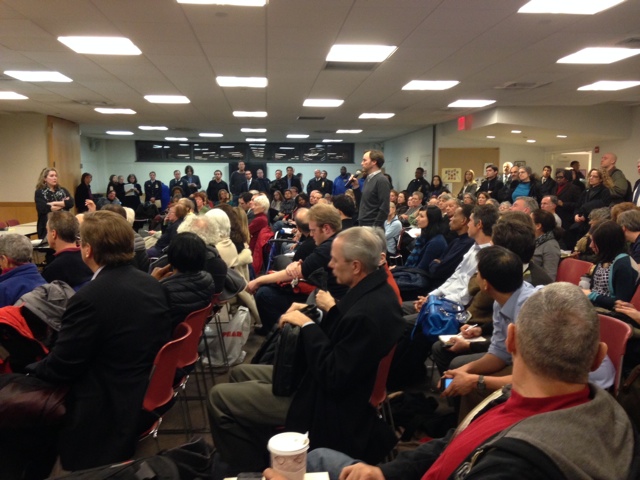 But the current system of appointed boards isn't ideal, either. Thomas agreed that, at least on CB 9, the board could be more representative of the district, as most people who sit on the board are homeowners who have lived in the neighborhood for decades and are, for the most part, over the age of 50.

"They could be more representative, but that's on the elected officials to make the right choices," he said. "They do that in some neighborhoods...in our case, because [Brooklyn BP] Eric Adams is so entrenched in the old system, he's making a lot of political appointments."

Viteritti similarly suggested that rather than pushing for elected boards, communities demand that their borough presidents appoint people to the board who are representative of the community. In its review of the city government for the 2010 charter revision committee, the watchdog group Citizens Union made several recommendations on this front, noting that "community boards are too often plagued by vacancies and an insular culture" and suggesting that borough presidents be required to be completely transparent in making appointments to the boards. But, Viteritti said, it's kind of a "chicken and egg thing," as many people just aren't interested in participating in hyperlocal politics to begin with, and you can't force someone onto a community board if they're not interested in being there.

That doesn't mean that can't change. At least in Manhattan, community board applications have been on an upward trend in recent years, which would seem to indicate an uptick in interest. And there are currently a number of efforts underway to make the city's community boards more representative, though none go so far as suggesting elections. One bill before the City Council would limit terms of city council members to 12 years; another would require the city to publish the demographic information about board members. A third bill would require the city to provide a professional urban planner to each community board, to help navigate zoning and planning proposals.

"From digitizing our application process to actively recruiting youth members, I am proud to pursue meaningful progressive reforms that will give community boards a stronger and more reflective voice in local matters," Brooklyn Borough President Eric Adams said in a statement provided to Gothamist. "Ideas such as publicizing general demographic information on members and applicants as well as incentivizing participation through state tax credits are also among those that I am interested in exploring in the months ahead as part of my ongoing conversations about improving civic engagement."

As for increasing the boards' power: according to Viteritti, it's extremely unlikely, politically speaking, that the movement for veto power would ever gain enough traction to actually become a reality in a future charter revision. However, he said, those higher up in city government might be more receptive to a conversation about how to make it harder to override a community board's vote—for example, by requiring a supermajority on the City Council or the City Planning Commission if a community board votes against a land use proposal. (Though it's worth noting that even a required supermajority probably wouldn't have stopped the mayor's rezoning plan from going through, as that passed with little opposition in the City Council.)

None of this is to say that the boards are necessarily powerless, either: in many cases, an advisory vote from a community board is enough to shut down or significantly stall a project that the board objects to, and it's often at the board's recommendations that new proposals for bike lanes and street safety emerge.

The biggest hurdle, in Viteritti's eyes, is getting more people invested in community politics in the first place.

"We haven't really figured out a way to have active representative government at a localized level," Viteritti said. "It's a problem as much as it's something you'd wish to have. It's not just changing the law, it's getting people involved, and you want people involved who are representative of the community."

#City Council
#community boards
#history
#local politics
#mayor
#rezoning
#original
Do you know the scoop? Comment below or Send us a Tip