Why Did De Blasio's DOT Rip Out A Popular Protected Bike Lane?

Street safety advocates lobbied the DOT for nearly a decade before the agency finally installed a parking-protected bike lane on Dyckman Street, in Inwood. The new design was in place for about 10 months before the city repaved the street, erasing the bikeway in the process. That was six months ago, and the DOT isn't saying when, or if, the bike lane will be back.

Dyckman is a commercial thoroughfare that also connects Manhattan's east- and westside greenways. Completed in late 2017, the Dyckman Street bikeway brought some order to a chaotic street. Once forced to dodge double-parked cars and trucks, cyclists had dedicated paths adjacent to the north and south curbs between Broadway and Nagle Avenue, where motor vehicle traffic on Dyckman is heaviest. Gravel and epoxy sidewalk extensions, meanwhile, shortened pedestrian crossings and slowed driver turns.

The bikeway was just a few months old when elected officials, at the behest of business owners who preferred the previous design—two lanes for parking, two lanes for double-parking, and two lanes for swerving around double-parked vehicles—called on the city to rip it out.

NYC had never uninstalled a protected bike lane during the Vision Zero era. Even so, in response to complaints, the DOT was poised to replace the eastbound half of the Dyckman bikeway, on the south side of the street, with a "curbside buffered parking lane"—i.e. double-parking zone—until Mayor Bill de Blasio intervened.

"It’s a very big government and sometimes things happen that do not reflect my will," de Blasio said last September. "It will be brought to my desk and I’ll render a judgment, then we’ll let you know. So, that decision’s on hold until I review it."

At the time de Blasio made those remarks, however, Dyckman between Broadway and Nagle was already a swath of fresh asphalt. Since then, the DOT has striped the street as it was before the protected bike lane was installed: four through-lanes for drivers, no bike lanes, no pedestrian safety upgrades.

Multiple emails to the DOT asking what's next on Dyckman have gone unanswered.

It's unbelievable how wide Dyckman street is. I can't believe we have to argue about how to make this safe for #bikenyc. (also I continue to believe leaving unmarked streets after paving is negligent) #VisionZero https://t.co/Sny8j8A2RB pic.twitter.com/bQIn480Uyg

A bit of background: The idea for a protected bike lane on Dyckman Street originated with a group of Inwood residents who first presented their "Dyckman Greenway Connector" plan to Manhattan Community Board 12 in 2008. For the next nine years, DOT and the community board let the concept languish, as traffic crashes on Dyckman injured more than 300 people, according to city data.

Dyckman, Broadway and 207th Street are Inwood's primary commercial corridors. Prior to the installation of the Dyckman protected lane, bike facilities on those three streets were limited to painted lanes on Dyckman's relatively tame east and west ends (west of Broadway and east of Nagle). NYPD traffic enforcement in Inwood is minimal—officers from the 34th Precinct issue one to two speeding tickets per day, on average—leaving cyclists to contend with illegally parked vehicles, speeding drivers and other hazards.

Under de Blasio and his predecessor Michael Bloomberg, the DOT has actually taken away bike infrastructure in Inwood, including painted bike lanes on Seaman Avenue and W. 218th Street, a marked bike route that connects the Hudson River Greenway and the Bronx. 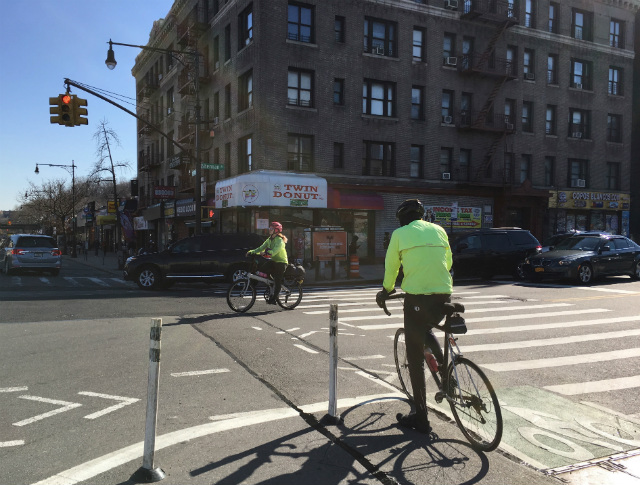 The bikeway on Dyckman in February 2018, before it was removed (Brad Aaron / Gothamist)

While projects intended to reduce traffic collisions are subject to being delayed or derailed by community boards, which often prioritize parking over concerns such as who lives and who dies, there is generally no public process before the DOT removes a street safety improvement. True to form, the DOT's decision to toss eastbound Dyckman cyclists back into traffic was presented as a fait accompli.

That announcement came after Manhattan Borough President Gale Brewer and Congressman Adriano Espaillat, who represents Inwood, mounted a months-long campaign to pressure the DOT to tear out the bikeway. In a February 2018 letter to DOT, Brewer and Espaillat made a host of unsubstantiated claims—they said the protected bike lane made Dyckman more dangerous, for instance, but cited no data to prove it—and called on the city to reroute cyclists to residential 204th Street, two blocks north.

Though locals proposed a Dyckman bikeway years before de Blasio was elected, Espaillat and Brewer conflated it with the mayor's plan to rezone Inwood—a lightning rod for anti-gentrification sentiment. Another highlight: Behold a sitting member of Congress attacking a traffic safety project from the driver's seat of his car.

The Dyckman Street bike lanes are clogging a critical economic artery of our community & making it difficult for emergency response vehicles to maneuver through the area. This problem has to be resolved! @galeabrewer #NY13 pic.twitter.com/r4HmkmQwuq

Taking heat from business owners upset that drivers couldn't double-park in front of their shops like they used to, Ydanis Rodriguez, local council member and chair of the transportation committee, asked the DOT to water down the bikeway design. Under Rodriguez's plan, the DOT would install a bi-directional protected bike lane on the north side of Dyckman. Since there are more than twice as many intersections and curb cuts on Dyckman's north side, it's likely such a design would lead to more motorist-cyclist collisions. But the idea is that on the south side of the street, drivers could double-park with impunity, like before.

Gothamist asked Rodriguez's office if the council member still supports redesigning the bikeway. We have gotten no response.

Maggie Clarke, an environmental researcher and Inwood community organizer since the 1970s, was the driving force behind the 2008 greenway connector proposal. Clarke says elected officials’ attack on the completed project was based on anecdotes, not empirical evidence.

“I am disappointed that not one of the electeds questioned the story that the businesses gave them—that the bike lanes ‘ruined’ their businesses—and that nobody else (e.g., the press) did any investigation of this claim,” Clarke told Gothamist via email. “I provided with my testimony at the [May 2018 CB 12] hearing numerous studies that disprove any claim that bike lanes were bad for business, even in NYC. Nobody read what I submitted.”

So what happens now? Will the DOT reinstall the bike lane like it was? If so, what's the timetable? Will the city go with Rodriguez's proposed redesign? If so, will it be subjected to years of community board meetings, as the original bikeway was? Or is the plan to leave the street as is, a citizen-generated street safety project wiped away without as much as a single public meeting?

Of course, the DOT could make it easier for drivers to park on Dyckman by raising meter rates when demand is highest. But given NYC's longstanding aversion to treating curb space like the valuable commodity it is, that's probably the safest outcome to rule out.

#bike lanes
#dyckman avenue
#inwood
#vision zero
#longform
#original
Do you know the scoop? Comment below or Send us a Tip