Who's Trying To Erase East Williamsburg's "Avenue Of Puerto Rico?"

The rumor began swirling on the streets of East Williamsburg—or is it still Bushwick?—late last summer, overheard on street corners and even announced at a cultural event: someone or someones were pushing to remove the "Avenue of Puerto Rico" text from the Graham Avenue street signs.

"I heard about it a long time ago, then didn't hear anything else. I thought it was a dead issue," said Betty M. Cooney, the executive director of the Graham Avenue Business Improvement District. She'd hoped it would disappear back into the mysterious void from which it came, but unfortunately, it seems to keep popping up.

"I figured maybe it was just somebody's lame idea of a joke. Then maybe a month ago, someone mentioned it again."

The idea of retooling neighborhood names for real estate rebranding is nothing new. Take "ProCro," a portmanteau of Prospect and Crown Heights conceived by the real estate industrial complex with the idea of more closely associating the area east of Washington Avenue with Prospect Height's tonier reputation.

Residents scoffed at the idea of disregarding a neighborhood's history to make it more palatable to affluent newcomers—at the time, we couldn't find anyone on the street who supported the change.

Similarly, nobody we spoke to supported the idea of axing "Avenue of Puerto Rico." Nobody except Brooklyn-based developer Michael Schlegel, who supported the rationale for "ProCro" in a 2011 interview with the Wall Street Journal.

Schlegel, who helped develop a glass-walled condo building in Crown Heights at St. Johns Place and Classon Avenue, said shortening the street signs would be a shrewd move to increase East Williamsburg's cachet.

"It's becoming a very hot area, and the people from Williamsburg are moving further out, and they don't want it to be known as a Puerto Rican or Spanish area anymore," he said. "I think it would help the image of the area."

Community Board 1 and the DOT, the municipal agencies who would be responsible for removing the name, both declined to comment, though a DOT representative said they hadn't heard of a proposal to tweak Graham Avenue's signs. Still, people keep talking. 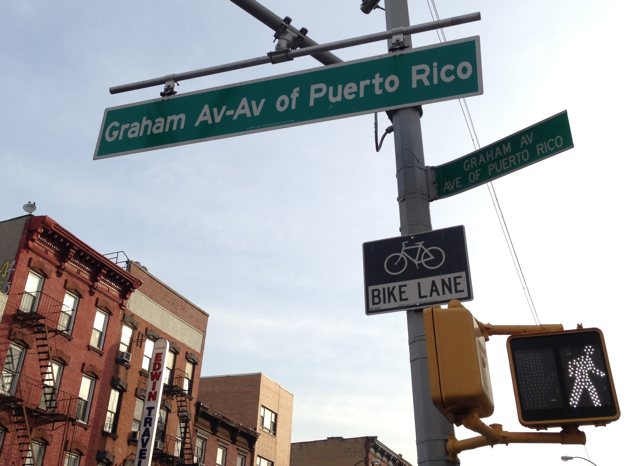 Rosie Ricardo, owner of New York Trophies and a board member of the Graham Avenue BID, said she first caught wind of the rumor from people talking outside her store, overhearing snippets of chatter that the sign may be in jeopardy. Ricardo, who grew up in Bushwick but is of Puerto Rican descent, said she doesn't mind the demographic changes coming to the neighborhood, and in fact prefers the lowering crime rates and increase in local business accompanying the wealthy newcomers—as long as they don't attempt to meddle with tradition

"The neighborhood is becoming more Caucasian, but that doesn't give anyone the right to come in and take away our name," she said. "They don't know the history of the neighborhood."

Martin Garcia, a lifelong East Williamsburg resident, also heard rumblings of the sign's removal. He said he was smoking a cigarette outside Petland Discounts, Inc., where he works as a manager, when he overheard a group of men saying that "Avenue of Puerto Rico" needed to go.

"It was bad stuff. They said that they should have changed it, saying they don't know why they call it the 'Avenue of Puerto Rico," recalled Garcia, who is Puerto Rican, adding that several racial epithets were thrown around as well. "It wouldn't really bother me if they changed it, but why do it? It's been there so long."

There are others who think the sign, which was installed in 1982, should never have gone up in the first place. Steven Guzman, 48, was born and raised in the neighborhood. He said he was sickened when the sign went up more than 20 years ago, saying that labeling the street only deepened an already notable racial divide.

Guzman, who identified himself as a Spaniard, said he never needed a sign to figure out where his neighborhood began and ended. "When I was growing up, there was a division," he said. "The bottom line is if you walked across Grand Street you were no longer in the neighborhood—the Puerto Rican side of the neighborhood—because literally everyone was Italian."

Guzman said that if there's a push to remove "Avenue of Puerto Rico," it better also include Graham's Italian counterpart, Via Vespucci, added to the north of Grand Avenue in 1989. "I was like, what, once you get to Grand Street you're suddenly an Italian? That's wrong," Guzman said. "We're all American here."

Edwin Sarmiento, who owns VIP Coffee & Restaurant, echoed the opinion of several local residents when he said that removing the sign wouldn't matter, since no one refers to the street as "Avenue of Puerto Rico" anyway.

"Even the Puerto Ricans don't call it 'Avenue of Puerto Rico.' They just call it Graham. I'm used to hearing only Graham," said Sarmiento, who moved to the neighborhood two years ago after emigrating from Ecuador. "There's not that many Spanish left around here anyway," he said with a shrug. "The rent is getting too expensive."

But Cooney, director of the BID, said the current makeup of the neighborhood is not the point. Rather, it’s a tribute to a time past. "It's like saying 'Let's stop Chinatown from being Chinatown.' It's not cool. This has been the Avenue of Puerto Rico for many years. It's a tribute to the legacy of that community," she said. "It would be very disrespectful if they tried to do something like that."

Lauren Evans is a reporter living in New York City.

#gentrification
#graham avenue
#procro
#via vespucci
#williamsburg
#longform
#original
Do you know the scoop? Comment below or Send us a Tip