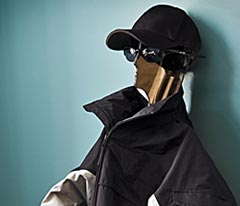 Drivers will go to some strange lengths to take advantage of HOV lanes: Yesterday, a Suffolk deputy sheriff pulled over a driver and his Plexiglas passenger.

According to Newsday, the deputy sheriff "saw right through the commuter's passenger," who was made of "smoke-tinted plastic." The deputy's office said the deputy sheriff thought the passenger "looked unusual. He stopped the vehicle, and it was a two- or three-piece construction of Plexiglas, dressed in clothing to appear to be a passenger."

Ronkonkoma resident Steven Dinowitz apparently said, "It’s never been a problem before, I’ve had him with me for over a year." That's when the deputy sheriff explained how the additional passenger needed to be human. Dinowitz received a summons and Sheriff Vincent DeMarco said, "It’s a shame when our hardworking commuters are inconvenienced by someone trying to beat the system."