Who's Afraid of the Puerto Rican Day Parade? 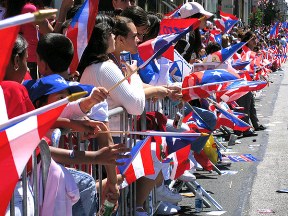 Well, according to a New York Magazine Intelligencer item, it might be Madison Avenue cafe Via Quadronno. The establishment "closes for just four days each year: Thanksgiving, Christmas, New Year’s, and a certain spring day."

A spokesman claims coincidence. “We close that day every year for internal construction,” he says. “The last day of the first week of June.” The Puerto Rican Day Parade is on the second Sunday of June each year.

Snap! And a regular confirms to NY that "They tell you the day before—they whisper it—‘Don’t come tomorrow.'"

Back in 2005, Mayor Bloomberg told swanky Fifth Avenue apartment buildings not to board up their doors and windows during the parade because it was insulting. And last year, there were over 200 arrests at the parade, though there were questions over whether the arrests were warranted (some accused the police of sweeping up people, the police said many were involved with gangs).

This year's parade is on Sunday, June 8. It starts at 11 a.m., with the festivities traveling north on Fifth Avenue from 44th St. to 86th St. This year's Grand Marshal is labor leader Dennis Rivera.