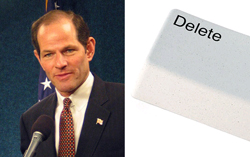 In what was probably an end-of-year house cleaning, the e-mails related to the Troopergate re-investigation were obliterated and thus made unavailable to Albany County District Attorney David Soares. The Spitzer administration has been stalling for weeks to make e-mail records available to Soares and state computer recovery experts are now saying that servers and hard drives were deliberately purged and scrubbed.

Troopergate was initially about Gov. Spitzer or his aides using State Police to effectually spy on Spitzer's primary political foe in Albany, Joseph Bruno. (The two also don't appear to like each other on a personal level.) The Governor's communications director Darren Dopp was suspended in the course of the investigation and has since left state employ for a job with an Albany lobbying firm.

The subpoena delivered to Spitzer from DA Soares was meant to help substantiate claims that the governor or his aides suborned perjury by Dopp during the initial investigation. Some contend that Dopp was pressured to lie to protect the governor.

"We've been told that whole hard drives were purged and scrubbed and that key files that were once there dealing with the scandal are gone," someone close to the probe told the New York Post.