Who Works For WeWork?

On July 1st, soon after the international co-working company WeWork announced its $10 billion valuation, dozens of service workers from across the city gathered at Fulton Center to protest the low wages, lack of benefits, and alleged threats against unionization that the startup's 100-plus office cleaners endure. These custodians don't technically work for WeWork. Rather, they are employed by nonunion subcontractor Commercial Building Maintenance Corp. Or at least they are for three more weeks.

Bolivar Coronado of Bed-Stuy works the 5-hour night shift at the company's East 23rd Street location, cleaning shared kitchens and bathrooms, vacuuming floors, and taking out the trash. He told us at the rally that the $10/hour he makes "is not enough to support even myself." According to SEIU 32BJ—the service workers' union that has been helping the subcontractors rally for higher wages and benefits with the "We Work Here Too" campaign—the starting hourly rate for a unionized cleaner in New York is $18 per hour.

Unbeknownst to Coronado and the rest of the cleaning staff, CBM and WeWork had terminated their relationship five days before we spoke to him, on June 25th—one week after the workers' campaign went public on June 18th. That same day, 32BJ filed an unfair labor practice charge with the National Labor Relations Board. CBM's contract is set to expire on August 23rd, and with it, all of the cleaners' jobs.

On July 1st, WeWork made no mention of this impending termination of contract, instead stating that, "Since all of these individuals are employees of our contractor, we do not even have the right to terminate their employment."

A month later, WeWork finally confirmed that CBM indeed "terminated their contract with WeWork on June 25." Adding, "We are currently working to make sure we have uninterrupted cleaning service for our members." (CBM itself has not responded to multiple requests for comment.)

Asked whether the current cleaners have been informed by WeWork that their jobs will soon be nullified, a spokeswoman for the company had no comment. Nor would she comment on whether the workers had been invited to reapply for their jobs, nor if WeWork planned to hire a new cleaning staff directly, or seek another subcontractor.

Coronado told us on Monday that he learned that CBM's contract would soon be terminated two weeks ago, not from his employer, but from 32BJ. Come August 23rd, "I have no idea who would employ me." 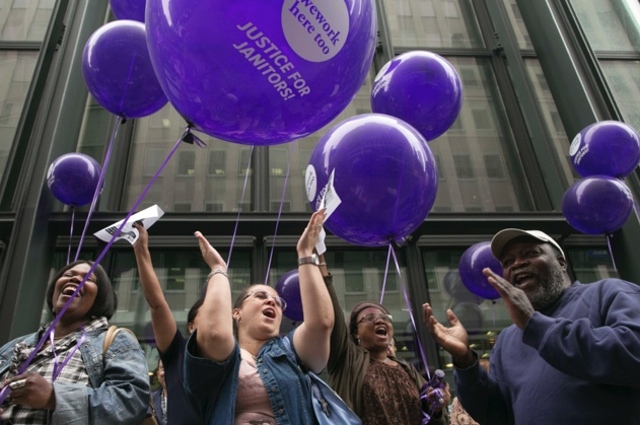 Nestor Melgar has been working the night shift at WeWork's 25 Broadway location for over a year. WeWork often hosts happy hour parties during his shift, and he and two other cleaners are responsible for clearing away empties and sweeping up broken glass, in addition to vacuuming, restocking kitchens, and cleaning bathrooms. Melgar says that neither WeWork nor CBM notified him of the impending contract termination, either.

On Monday, nine of CBM's night-shift cleaners, along with 32BJ representatives and Senator Daniel Squadron, attempted to deliver a petition to WeWork headquarters. With more than 75 signatures, it states: "We hereby make an unconditional application for employment with your company or any successor cleaning contractor you choose to hire. We want to make sure that you or any contractor you hire does not discriminate against us because of union activity."

It was a confusing afternoon. First the cleaners stopped at 222 Broadway, only to find that WeWork had just finished relocating its headquarters to new office space at 115 West 18th Street.

Undeterred, several of the workers continued uptown, and managed to hand over their petition. Melgar told us afterwards that when they arrived at the new offices, a WeWork employee "said we couldn't come in, and that we could give the petition over e-mail." It wasn't until WeWork CEO Adam Nuemann happened to walk by the entrance, and several of the workers called him out by name, that a second WeWork employee came forward and took the petition. According to Melgar, "He just said he was going to give the petition to the CEO. He didn't give us any more information."

WeWork confirmed on Tuesday that they had received the petition, adding "WeWork has never, and would never, discriminate against anyone for union organizing."

WeWork supplies office space, and organizes meetups and parties, for small businesses, startups, and non-profits across 15 office spaces in New York City. Its stated mission is to "create a world where people work to make a life, not just a living."

This summer, the company is hoping to secure a spot as an anchor tenant at the Brooklyn Navy Yard. A press release dated July 6th announces a "joint initiative" between WeWork and the Brooklyn Navy Yard Development Corporation to turn the yard's Dock 72 into a "1 million-square-foot innovation and manufacturing hub." WeWork plans to lease a 222,000 square feet of that space. The proposed 16-story, $38 million building is scheduled to break ground later this year. From the release:

In his testimony at a NYC Design Committee Hearing on Monday to discuss the Navy Yard project, Coronado said, "WeWork says it is not just creating office space but also a community where they're 'redefining success measured by personal fulfillment, not just the bottom line.' So why doesn't WeWork care about the fulfillment and well-being of the support workers like us?"

Without any official statements from WeWork or CBM about the status of their jobs, rumors have been swirling among the cleaners. "I heard that people from the day shift have already been contacted by WeWork [about keeping their jobs]," Melgar told us. According to 32BJ, these workers, a "small number," have distanced themselves from the wage-and-benefits campaign in recent weeks.

So, who does work for WeWork? These people definitely do:

According to WeWork's website, the company is in fact hiring a "Member Services Associate," whose job description lines up with that of the CBM cleaning contractors. A union rep told us that several workers have applied for the position with their help, and have yet to hear back.

For other cleaners, the majority of whom speak English only as a second language, this new position, which is listed under an unfamiliar title, is buried on the company's website, and requires three references, has added to the general sense of confusion.

Sonia Rosales has worked at WeWork's 85 Broad Street location for three months. She told us in Spanish, through a translator, "I don't know what's going to happen on the 23rd of August. I'm in limbo."

#fair wages
#startups
#unions
#wework
#longform
#original
Do you know the scoop? Comment below or Send us a Tip