Who Will Be The Next City Council Speaker?

The speaker of the City Council is, arguably, the second most powerful elected office in New York City, though it’s still a distant second behind the mayor. As the leader of the 51-member City Council, the speaker must negotiate an $80 billion budget, shepherd legislation into law, and approve, with the consensus of the body, all rezoning proposals in the city. The office comes with plenty of perks: higher visibility in a competitive (and occasionally vicious) New York media landscape, a $164,500 salary, security detail, a driver, and plenty of well-paid staff.

For ambitious council members, the speaker’s post is coveted. There’s the power of running the body, telling your former colleagues what to do, and deciding—often unilaterally—what bills come up for a vote. With the exception of the current speaker, Melissa Mark-Viverito, all speakers have run for mayor, though never successfully. The post, however, is still viewed as a stepping stone of sorts to more power and recognition.

Mark-Viverito’s term expires at the end of this year and the jockeying is already underway to replace her. Speakers of the overwhelmingly Democratic City Council aren’t chosen by voters—it’s an election that comes down to the members themselves choosing a leader. This means much of the action takes place behind-the-scenes, on the phone and in offices, bars, or wherever people can talk discreetly. The speaker contenders will also hit the campaign trail to help out current colleagues (or candidates expected to win) and shower them with donations. Any aspiring speaker knows you have to butter up the voters.

The actual vote won’t be held until January, at the first Council meeting of the new year. When the vote occurs, it will likely be unanimous. Everything, for the most part, will have been worked out beforehand. 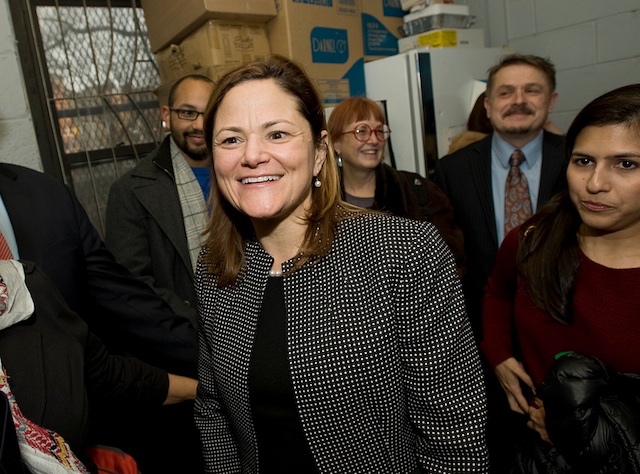 This doesn’t mean the race to replace Mark-Viverito won’t be acrimonious. Like the last contest that Mark-Viverito, a Manhattan Democrat, ultimately won, things are bound to get heated. Voting isn’t so simple, not when the mayor, outer borough Democratic parties, labor unions, lobbyists, and an increasingly fragile progressive coalition all try to crown a speaker. Race, as it often is, and geography will be factors.

At the moment—and keep in mind, the situation is very fluid—political insiders believe there are three Democrats who have near-equal opportunities to become the next speaker. Two of them are from the West Side of Manhattan: Corey Johnson, who is based in Chelsea, and Mark Levine, who represents parts of the Upper West Side, Washington Heights and Inwood. The third contender is Donovan Richards, a Democrat from the southeast swath of Queens.

Also competing, though with less of a shot at the moment, are Jimmy Van Bramer of Queens, Ydanis Rodriguez of Manhattan, and two Brooklynites, Robert Cornegy and Jumaane Williams. A late entrant into the race, the Bronx’s Ritchie Torres, could rocket to the top of the pack if his plan for victory—being the unabashed candidate of the Bronx Democratic Party—comes to fruition.

So how are speakers made? Why is one guy a front-runner and one guy not? Where are the women?

Traditionally, the two county organizations who controlled the most votes and remained the most united, the Bronx and Queens, played a strong role in selecting the speaker. Staten Island is too small, Manhattan has little control over what its members do, and Brooklyn is too factionalized. If a candidate could secure a bloc of votes from the Queens and the Bronx, the race would be sewed up.

The trade—which had only somewhat to do with the merit of the council speaker candidate—would be a Manhattan speaker in exchange for Queens (and to a lesser extent, the Bronx) getting patronage jobs in the City Council, as well as coveted committee chairmanships for outer borough council members. This is how Christine Quinn, who ran for mayor in 2013, became speaker.

Mark-Viverito did it differently. Defying a candidate backed by the Bronx and Queens organizations, she knitted together a coalition—with the help of de Blasio’s lobbying and push from certain labor unions and lobbyists—of left-leaning council members. It broke the paradigm of how speaker races are won.

And it may not be repeated this time around.

The Council’s Progressive Caucus is less unified since three of the top speaker candidates—Johnson, Levine and Richards—all hail from their ranks. Johnson, though he’s endorsed de Blasio’s re-election, has framed himself to lawmakers as the candidate most willing to stand up to him, appealing to those who feel Mark-Viverito’s speakership was too conciliatory to the liberal mayor. 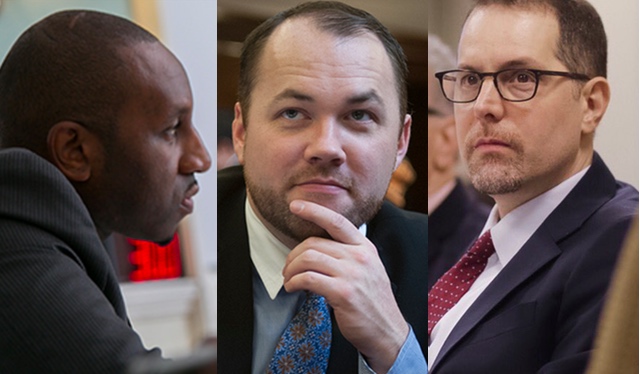 Johnson has also been running for speaker from almost the moment he was elected in 2013, lobbying aggressively for the post and building up both goodwill and raised eyebrows. Despite being openly gay, he visited Ruben Diaz Sr., a state senator and City Council candidate, in the hospital, even though Diaz is a staunch opponent of same-sex marriage and abortion access. Johnson has made it clear he wants the backing of Queens, led by congressman Joe Crowley, who is viewed by some as a potential successor to Nancy Pelosi, and the Bronx, which is still effectively run by Carl Heastie, the powerful speaker of the State Assembly.

Levine, like Johnson, will struggle with the Council’s reluctance to elevate another white male to a powerful post in a majority-minority city, though council members quietly see him as the most substantive of the front-runners. The oldest candidate in the race—he’s 48—Levine was behind the push to guarantee lawyers to low-income people in housing court. He’s also a fluent Spanish and Hebrew speaker. What’s unclear is where his support will come from if progressives aren’t unified, especially if Johnson emerges as the candidate of the county organizations or de Blasio, assuming he’s comfortably re-elected, decides to put his weight behind a candidate of color.

Richards, who chairs an important zoning subcommittee, has shot to the front of the pack since another top candidate, Julissa Ferreras-Copeland of Queens, announced she wasn’t running for re-election. Once a dark horse, his candidacy is now being taken very seriously: he could be the council’s first African-American speaker, a candidate to gather together fractured progressives, and someone de Blasio could throw his weight behind.

The de Blasio factor is still unknown. Conventional wisdom holds this version of the Council will pay less deference to him, but if he crushes Republican Nicole Malliotakis, he’ll be a re-elected mayor running the largest city in America for another four years. He will matter in some way, and could potentially broker a deal with the county organizations—or try to run over them once again.

The major labor unions in the city are less united than they were four years ago. The Hotel and Motel Trades Council is firmly behind Johnson. But 32BJ SEIU, the building workers union and a major player in Mark-Viverito’s victory, is not, and council members are trying to determine where they should fall in this struggle.

And finally, there is the question of where new council members will pledge their loyalties.

There will be, at the minimum, 10 new council members, all with their own particular loyalties and predispositions. One Brooklyn council member not seeking re-election, David Greenfield of Brooklyn, helped swing votes for Mark-Viverito in 2013 and his favored successor, Kalman Yeger, will have deep relationships with Brooklyn and Bronx lawmakers—he’s close to the borough president, Ruben Diaz Jr.—that could scramble alliances if he decides to strongly back one candidate.

Nothing will crystallize until after the November elections. Traditionally, the Somos el Futuro conference in Puerto Rico, where just about every politician, operative, and lobbyist in town attends in November, is where a lot of politicking gets done. Keep your eye on that, too.

North Bronx residents have put up with the sound of gunfire for over 50 years.

By
Rosemary Misdary
64-year-old woman dies in Forest Hills, Queens apartment fire
By
Louis C. Hochman
Newark Liberty Airport ties its record for most guns found in a year — with a month left in 2022
By
Rosemary Misdary
After Santa gets moving, workers start cleaning tons of Macy's Thanksgiving Day Parade trash
By
Rosemary Misdary
Get the news New Yorkers need in your inbox