Who Is Burning Down The Homes Of Bukharian Jews In Queens?

Just after midnight on December 6th, a fire broke out at the home of Rabbi Zalman Zvulonov on 69th Road in Forest Hills. The two-alarm blaze could be seen from blocks away. It was the first day of Hanukkah, and the seventh arson attack in an enclave of Bukharian Jews.

Dubbed “Bukharian Broadway,” 80 percent of the population of the Cord Meyer area of Queens is made up of Bukharian immigrants, part of the approximately 60,000 Bukharian Jews living in New York, according to the Queens Jewish Community Council.

Five of the seven attacks targeted Bukharian homes (one fire occurred at an unoccupied home on 67th road, while another broke out in the former Parkway Hospital building on 113th street). All of the fires were set in buildings that were under construction and uninhabited.

Rabbi Zvulonov was in the process of expanding his four-bedroom house. According to police, the December 6th fire was a second attempt on Zvulonov’s home; the first occurred on November 15th, but was quelled before serious damages were incurred.

This time flames razed the home to blackened rubble. Several surrounding homes have also been affected by the fires, bringing the total damages to 13 buildings.

Authorities believe a single arsonist is responsible, but the spree has not been declared a crime of anti-Semitism. However, the Hate Crime Task Force was present at a closed meeting between high-ranking officials, including NYPD Chief of Detectives Robert Boyce, and Bukharian community leaders earlier this month. The head of the FDNY's Bureau of Fire Investigation, Commander Randall Wilson, says their investigation is still ongoing.

“It’s something that we take extremely seriously,” said Melinda Katz, Queens Borough President. “The community stands together in making sure we find this arsonist that is out there, destroying not only people’s homes, but people’s lives, and people’s dreams.”

Community members and authorities alike speculate that the violent attacks may be in reaction to Bukharians’ opulent homes, which have been a subject of controversy for years because they don’t fit in with the prevailing neighborhood scale.

“It’s an absolute disgrace,” Richard Hellenbrecht, vice president of the Queens Civic Congress, told the Times of new, glitzy homes being built in his section of Queensboro Hill. “Lovely, affordable homes being squeezed out by monstrosities.”

Others have dubbed the Bukharian houses “McMansions,” “Garage Mahals,” and “Persian Palaces.”

“Whenever we drive through those parts of town, you see more mansions going up,” says Rob Lancaster, 60, a 16-year Queens resident. He said that he empathized with the Bukharians, but that the encroaching structures “sort of feel like a threat to our piece of the world.” 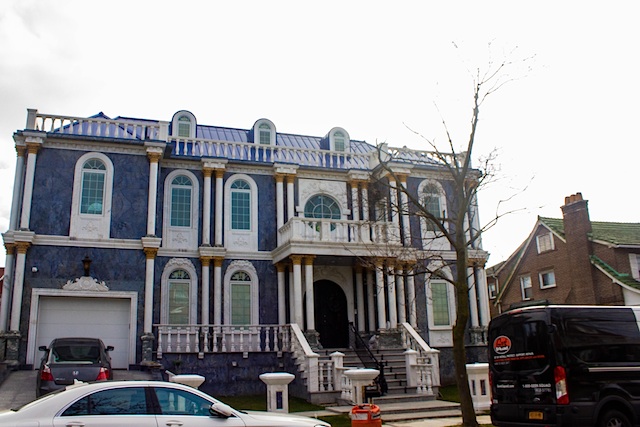 Bukharians can trace their roots from along the Silk Road, mainly from Uzbekistan, where they served as merchants, silk dyers, court musicians, doctors, and teachers to the Muslim emirs, and for millennia lived in a heady blend of clashing cultures: Babylonian, Persian, Sephardic Jewish, and Slavic influence.

Their language, Bukhori, reflects a Tajik-Farsi-Hebrew amalgam, later Russified. Yet Bukharians were repeatedly persecuted in their own homeland, weathering expulsions and oppressive occupations, from ancient Persia to ecclesial Europe to Soviet rule. Leaders often forbade Bukharians’ Jewish religious practice. During the collapse of the USSR, Bukharians streamed into the U.S. seeking refugee status.

Older Bukharians in Queens recall the reasoning behind their wariness: Soviet rule forced them to practice their religion in secret, and to be known was to be vulnerable.

“We used to wrap our Tanya [Torah portions] in Pravda newspapers,” said one elder Bukharian man, in his late-70s, who would not give his name.

For any group so long marginalized in their own land, home becomes an important symbol. Boris Kandov, president of the Bukharian Jewish Congress, has attributed their community’s architecture to dreams of affluence, security, and symbolic freedom.

“We dreamed of this,” Kandov has said. “We came to America to build beautiful houses.”

Moreover, Bukharian culture today revolves around a close family nexus. On average, three or four generations reside under one roof. Children traditionally don’t leave home until they marry and establish their own households. This warrants five bedrooms at least, some Bukharians say—and more room during high holy days, when extended family and friends feast and celebrate as one.

“Any reason to gather together, they will,” says Yaniv Meirov, Bukharian founder of the community nonprofit Chazaq and member of Community Board 6. “So a regular house won’t fit everyone. [People] need to understand that.”

Blogs like “Queens Crap,” a website that focuses on the “overdevelopment and tweeding” of Queens, have dedicated several posts in recent years to the “Russian Embassies.” Opinions have ranged from uncivil to bigoted.

“Bhukarians? They make the most low class Russian look uncivilized!” said one anonymous commenter on the site. “Just a few years before they installed themselves in their ‘palaces’ they were likely herding (or screwing) goats, sheep, in the steppes.”

In 2009, lobbied by frustrated community members, the Department of City Planning adjusted building requirements for the Cord Meyer area of Forest Hills, in an attempt to limit new “out of character” buildings’ spread, and ensure future building sites “reflect the prevailing scale” of the area.

Bukharians say all they want is to have a home of their own that they can be proud of without fear of persecution.

“Part of it has to do with jealousy,” said real estate attorney Nathan Pinkhasov, of the land use law amendments. “It’s a battle between older and newer generations, but even more, a disagreement over what’s considered beautiful.”

He added, “We’re not here to cause problems.” 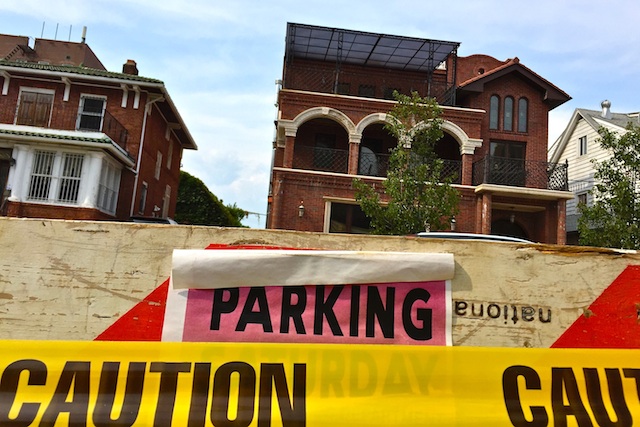 “Everybody’s scared, confused, and outraged. We don’t know. First they burn empty houses, we’ll pray they don’t progress to houses with people in them,” said Manashe Khaimov, director of the Bukharian Teen Lounge. “Parents are insisting their kids come home early. And I can’t believe this person just keeps going. Even with a police presence—this person just doesn’t care.”

There have been several debunked leads so far, including a mysterious motorcyclist and a taunting encrypted note left at one of the scenes—both of which turned out to be red herrings, investigators say.

Meanwhile, members within the Bukharian and larger Cord Meyer communities are in the midst of forming a volunteer-based local safety patrol.

Community member Sol Ibragimov is the founder of Emergeingear.com, which sells emergency supplies and disaster survival kits. He said the safety patrol, which so far has 10 coordinators, would work closely alongside city authorities.

“Wouldn’t you be devastated if something you put all your efforts into just—poof, vanishes!” Ibragimov says. “We’re just concerned for our families. If we don’t look out for our neighborhood, nobody will.”

The best bet so far is the street surveillance footage of one suspect at the scene, a hooded youth.

The NYPD announced plans to install more cameras around homes in the midst of remodeling in the area, and community members have proffered a $50,000 reward for information leading to the arsonist’s arrest.

“I lay in my bed at night, and hear the fire engines going past my house and say, oh no. Not another one,” Councilmember Karen Koslowitz said Tuesday. “We have to catch the person that’s creating these fires. This has to stop. This has to stop now.”

Sasha Pezenik is a multimedia journalist and graduate student at Columbia Journalism School, who focuses her work and passion on social, political, and ethnic fault lines. Follow her on Twitter @SashaPezenik.