Who Are These Protesters In Black And Why Are They Attacking 'Fascist' Internet Trolls?

Black-clad protesters calling themselves "antifa," short for antifascist, have attracted national attention in recent weeks. Recall the masked troublemakers who pelted pharma-capitalist and Twitter troll Martin Shkreli with actual poop outside the University of California Davis. During protests around the presidential inauguration, a masked antifa radical became a hero to many when he sucker-punched neo-Nazi Richard Spencer, who purports to have been a grad school mentor to Trump senior adviser Stephen Miller.

So, what the hell is happening? Antifa is not a new idea—for as long as there have been fascists, there have been committed foes of fascism. However, over the past half century, as overtly racist authoritarian politics have fallen out of fashion in the U.S., antifascism too has been relegated to the margins. In recent decades, anarchists have taken up the mantle of antifa, and mobilized occasionally to try to scrap with the handful of people at the local KKK rally, or ambush white supremacist message board users meeting up at a diner, but generally they have not garnered much notice.

gained 1,000 followers in the last week... pretty crazy for us as we've been active for many years with minimal attention. SMASH FASCISM!

Now, of course, our president is a demagogic rich guy elected on the strength of his racist and xenophobic conspiracy theories, nationalistic promises, and lies about the economy, with the help of an online movement of internet trolls whose views range from generalized patriotism to overt advocacy for genocide (McInnes, for what it's worth, is derided as "alt-lite" by the hardcore racists of the so-called alt-right—evidently it is not enough to criticize Fox News for being "too politically correct").

The appearance of violent mobs at universities and elsewhere, single-mindedly devoted to shutting down talks by racists and misogynists and scaring those who would attend them, has drawn an outcry from liberals and conservatives alike, who typically say that the tactics are an affront to the concept of free speech. Antifa groups, too, are trying to claim the mantle of a grand American tradition, pointing to the U.S.'s role in fighting Nazi Germany during World War II.

It is always proper to punch Nazis. My WW2 vet grandfather punched Nazis. The Greatest Generation punched Nazis. Be a patriot, punch a Nazi! pic.twitter.com/RXOyUNFmnq

A man who gave his name as Damien and works with NYC Antifa described it as a media hub, the main activity of which is to monitor and report on far right groups. He said that there are hundreds of antifascists in the New York City area. Defending the actions of those involved in the standoff last night, he said, "Antifascist students at NYU called for a shut down for McInnes' racist, transphobic, and homophobic rhetoric. It's one thing to have a discussion with someone we don't see eye to eye with, another with someone who wants to send millions of our neighbors, coworkers, and comrades to prisons and foreign countries, not to mention calling for the death of leftists and Jews. The First Amendment prohibits the government from interfering with free speech, but not from people protesting, boycotting, and disrupting hate speech."

Their "fucked up" is our "Making America Great Again." pic.twitter.com/PMCYMv4hA8

We don't have direct citations for the views Damien ascribes to McInnes, but as our reporter Jake Offenhartz noted:

While McInnes rejects the white supremacist descriptor, his comments made in recent articles for Taki's Magazine include suggesting Muslims are “more violent” due to inbreeding, referring to Asians as “slopes,” and defending the use of the N-word. He’s also written for VDARE.com, which the Southern Poverty Law Center identifies as a "White Nationalist" hate group.

As with black-bloc anarchists who smash windows at protests, commentators at times seek to gloss over antifa's ideological bent to fit their own, associating them with Democrats, or calling them paid plants of liberal billionaire George Soros. Police and federal agencies do try to infiltrate anarchist groups, and informants have at times encouraged bomb plots, but generally speaking, anarchists gonna anarchist.

The recurrent clashes at radical right events—in Seattle, a Yiannopoulos fan shot an anarchist protester non-fatally during clashes outside a talk at the University of Washington—seem to have burnished the profile of both sides. Yiannopoulos's forthcoming book, published by Simon & Schuster, shot to number one on Amazon following the Berkeley riot. Meanwhile, an organizer with the anarchist collective CrimethInc. tells the New York Times that it is seeing growing attendance at meetings and outcroppings in places such as Omaha, Nebraska.

Both sides are keen to keep the confrontation going—Yiannoppoulos is hawking shirts that say "White Privilege" with the webstore tagline "Muslims Suck, Our Shirts Don't," while internet anarchists are hard at work pumping out the Nazi-punching memes, and both sides are busily researching the identities of the other.

Where does that leave us? For the moment, the antifa toughs are throwing more punches, although groups like McInnes's Proud Boys are doing their own chest-puffing—a Proud Boy attacked a Gothamist reporter at last night's NYU standoff, and was arrested for allegedly assaulting a DNAinfo reporter. And of course there was the aforementioned shooting by an alt-righter and the broader trend of hate crimes against racial and religious minorities, as well as Trump supporters. 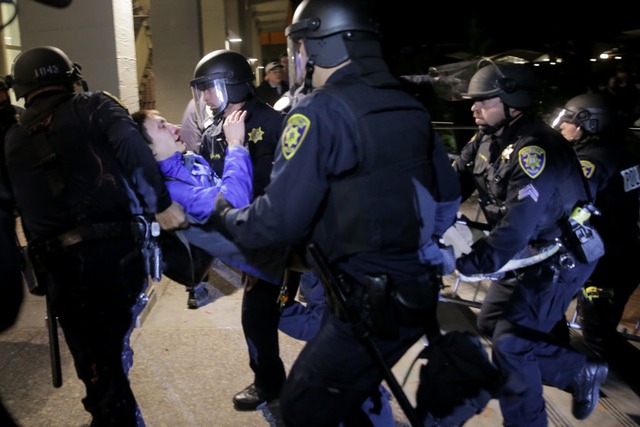 For some historical perspective on our chaotic and disturbing present, as well as an idea of what fascism actually looks like, the book Anatomy of Fascism by historian Robert Paxton is indispensable. Based on Paxton's framework, the U.S. seems to have arrived at a pre-fascist moment—a xenophobe who is seeking to destroy the separation of powers and scapegoat minorities has risen to office on a wave of popular support at a time of economic stagnation and military humiliation—but a dictatorship, a program of "purification," and military expansion are not currently underway in earnest. Of course, we are only two weeks in, and there is already what Trump formerly referred to as a "Muslim ban" in effect, among many other dramatic measures.

One persistent barrier to the resurgence of fascism in Europe and the U.S. following World War II, Paxton explains in his book, has been the stigma associated with the Nazi and fascist regimes among those who lived through the war. This has long kept overtly violent anti-Semitic, anti-immigrant, and anti-gay movements on the fringes, fighting outside skinhead punk shows and committing hate crimes, while conservative politicians have felt the need be subtler about using bigotry as a rhetorical tool. Still, far-right parties have come to prominence in Western Europe since the 1980s, the most successful being Jean-Marie Le Pen's Front National, which Trump is now seeking a close relationship with.

Paxton writes of Le Pen's success, "After the Marxist Left lost credibility as a plausible protest vehicle when the Soviet Union collapsed, the radical Right had no serious rivals as the mouthpiece for the angry 'losers' of the new post-industrial, globalized, multiethnic Europe." A recent New York Times Magazine article examines
in depth the continuation of the trend of marginal French unionists turning to the far right.

Professional anarchists, thugs and paid protesters are proving the point of the millions of people who voted to MAKE AMERICA GREAT AGAIN!

Musing about the possibility of fascism in the U.S., Paxton wrote in 2004, "Today a 'politics of resentment' rooted in authentic American piety and nativism sometimes leads to violence against some of the very same 'internal enemies' once targeted by the Nazis, such as homosexuals and defenders of abortion rights." The imagery of American fascism, he speculated, would be familiar symbols of patriotism and fraternity—the American and Confederate flags, mass recitations of the pledge of allegiance—transformed "into obligatory litmus tests for detecting the internal enemy."

He continued, "Around such reassuring language and symbols and in the event of some redoubtable setback to national prestige, Americans might support an enterprise of forcible national regeneration, unification, and purification. Its targets would be the First Amendment, separation of Church and State...efforts to place controls on gun ownership, desecration of the flag, unassimilated minorities, artistic license, dissident and unusual behavior of all sorts that could be labeled antinational or decadent."

Opponents of antifa violence argue that masked hooligans are playing into the hands of the ascendant extreme right, making its members seem sympathetic despite their bigoted views. History has some precedent for this. Hitler and Mussolini both rose to power in times of vigorous communist organizing and disruption, and as the communists sought to build parallel organizations inside and outside of official structures, so did fascists. Both the Nazis and the Italian Fascists used the Bolshevik Revolution and communist disturbances in their own countries as a foil to sell the public on their necessity, and to get people used to the idea of selective violence against those who allegedly deserved it.

For example, five brownshirts assassinated a communist worker of Polish descent in the town of Potempa in 1932, and Nazis pressured the courts to commute the killers' sentences from death to life imprisonment, with Nazi theorist Alfred Rosenberg arguing "one soul does not equal another soul." Then there was the famous fire that gutted the Reichstag building in Berlin in 1933, long believed to have been a false-flag operation, though now most historians believe the culprit was actually Dutch communist Marinues van der Lubbe. German President and Hitler collaborator President Paul von Hindenburg used the occasion to suspend rights of speech and assembly, and property protections, to give the federal government authority over state police, and to allow officials to arrest suspected "terrorists" at will. Nazi brownshirts took the opportunity to storm courtrooms, throwing out Jewish lawyers and magistrates, and to ransack the offices of left-wing organizations and newspapers.

This isn't to say that the Proud Boys are about to smash up newsrooms, but it's well-established that authoritarians and corporate opportunists operate best in moments of crisis.

On a related note, Yiannoppoulos, who is a senior editor at White House propaganda site Breitbart and who was banned from Twitter for racist and misogynist bullying, says that he is attending a White House press briefing today.

Update 5:30 p.m.: Yiannoppoulos didn't go to the White House press briefing after all, but rest assured that when the right-wing media sends its people, they're not sending their best.