The man who repeatedly yelled "White Lives Matter!" and "I hope you get raped" at protesters before hitting a woman in the face with her own camera during Wednesday's Freddie Gray, Jr. solidarity march has been identified as Savario Pugliese of Manhasset, Long Island, according to the NYPD. Pugliese, 49, has been charged with assault and criminal mischief.

Further research suggests that the NYPD may have misspelled Pugliese's first name, as Google brings up multiple results for a Saverio Pugliese of Manhasset. Pugliese's LinkedIn page suggests that he also goes by "Sam."

Pugliese has not responded to multiple requests for comment. 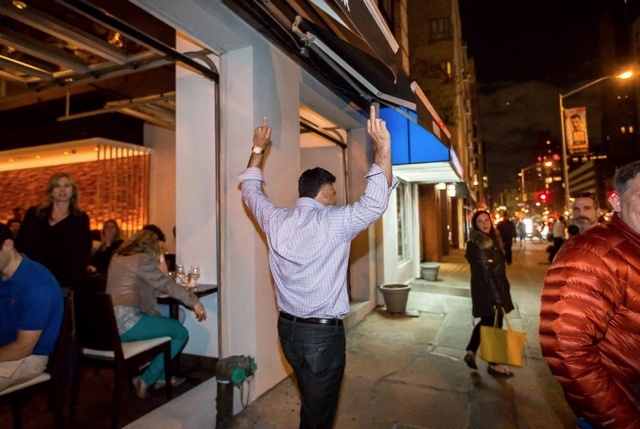 A Bloomberg Business profile of Be Active Holdings, listed on Pugliese's LinkedIn, reveals further details about his career, which appears to revolve around dairy products. He reportedly earned $150,000 in 2013, the year he became president of the company he co-founded, Be Active Brands, which owns Jala, a Greek frozen yogurt bar company that appears to make women smile a lot. Here's Pugliese back in 2011, spreading the Jala gospel:

In the words of Sam Pugliese, “This is the easiest way for people of all ages to ingest probiotics so why not eat something that tastes delicious.” Unfortunately for Pugliese, some words speak louder than others.

Update: Pugilese has now denied wishing rape upon anyone.