The man who was recently caught on video berating a couple after their stroller hit his leg has not yet watched the video of himself shouting about how he "settled" Downtown Brooklyn for other white people. "I’m not gonna watch it, I understand it’s probably ugly, and I’ll feel embarrassed about it," the man told Gothamist. "I can’t stand to watch that stuff."

The 46-year-old man, who we'll call B.A., invited us into the modest Fort Greene studio he shares with his 10-year-old pit bull and asked us to withhold his name for fear that he'll lose clients—B.A. is a self-employed personal trainer. He's also a native New Yorker.

"I have a temper, when I start seeing red it’s like I lose it, I admit to that. I lose it. I start screaming," he said of his reaction to being hit with the stroller, which he said left a nasty gash on his leg.

"The woman is talking over her shoulder to her husband, and doesn't notice," he said. "So I said a snarky thing, which the brothers say to me when I bump into them, which is 'excuse you.' We all know that's acceptable in New York. It's a little dicky, but that's what people say."

Instead of apologizing or acknowledging the faux pas, B.A. says the woman "starts screaming at me, 'Fuck you! Who do you think you are?' Then the guy starts screaming at me, 'Fuck you,' and starts coming at me with his fists like this. Now as soon as the guy comes at me with his fists, I'm telling you, if you come at somebody with your fists, be prepared that [the other person] is going to put their fists back up."

B.A. said that some of his recorded reaction stems from a troubled childhood, growing up on public assistance in the "one slum building on West 4th Street." 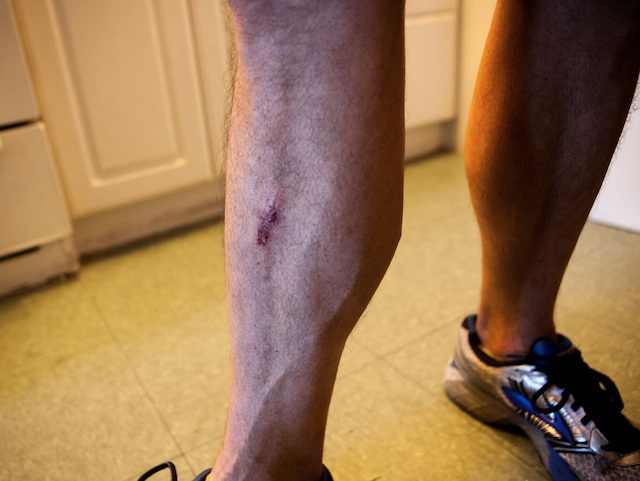 The gash that B.A. says was inflicted by the stroller (Scott Heins / Gothamist)

Eventually, the confrontation was diffused by a security guard, who B.A. says "deserves a medal."

"I didn’t want him to be in that situation. But nobody’s asking about golf shirt and Coke bottle glasses, why is he coming at me?"

We suggested it was possible that he was judging the man in the video the same way that the Internet is now judging him.

"You're right, I don’t know his story, but I did see his pink Izod, his glasses, I know the story of the Bell Tower," B.A. replied, referring to the BellTel Lofts (on the video, the man's shirt appears to be dark blue).

"Oh you live in the Bell Tower, you’re walking around in your polo shirt, you’re pushing your stroller into me and you don’t say 'excuse me.' You must be some kind of transplanted white trash. They don’t think they are because they’ve got money, but they act like it, you know?"

Still, B.A. says he can't excuse his behavior on the video. "I agree: It’s not really fair to go around screaming ‘I’m a native New Yorker no one can do anything.’ But I’m not that person."

Yet B.A., who was quick to produce the acting credits, modeling spots, and martial arts trophies he's accrued over the years, says he frequently finds himself in these situations: chastising a "Wall Street guy" in Fort Greene Park for berating park regulars, chiding a couple laying on a blanket for not picking up their trash ("I said, 'I pick up my dog’s shit every day so you can fuck your girlfriend in this park at night.' That made sense to him!"), and lecturing a woman whose dog was killing squirrels while she stared blankly at her phone.

"My friend who’s a cop said, 'stop losing your temper, call the police every time, just let them handle it and it’s out of your hands.' And he’s right about that, the only problem is, I don’t have a cell phone, I’m the last person who doesn’t carry a cell phone, because I don’t give a fuck," B.A. says. "Calm down with that shit already. Talk to me, like people. I’m old school."

So how could B.A. have claimed to have "settled" Fort Greene when he moved there in 1997? Isn't he just as much of a "colonizer" as the man he was shouting at? Aren't we all?

"When I came down here, Myrtle Avenue here, it was abandoned. When I used to go down to the liquor store down there, the black people would all run, because they thought I was a cop! So when I tell you I’m having a fight about white privilege with this man, I’m slightly guilty because I’m moving in to gentrify a neighborhood, except I’m the first one here when nobody wants to live here."

We asked B.A. to react to a man offscreen who sarcastically shouted, "Thank you, white guy!" after he claimed to have "settled" Downtown Brooklyn.

B.A. explained that one becomes a native New Yorker when they feel a sense of ownership about the city.

"When you feel you have ownership of something, you cherish it and you take care of it. As soon you feel like you’re just working here or just visiting, you don’t treat it the same way. So what I have in this city is ownership. When I look at the concrete I think, oh my blood mixes with the concrete."

Correction: This article initially quoted B.A. as saying he was born in "Mt. Sinai." He actually says he was born in St. Vincent's. We regret the error.

#downtown Brooklyn
#fort greene
#gentrification
#white privilege
#original
Do you know the scoop? Comment below or Send us a Tip