White and His Son Calls for Arrest of Victim's Father 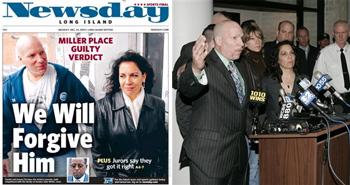 John White is free on bail after being convicted of manslaughter, and yesterday called for the arrest of the father of the 17-year-old Long Island man he killed. His son Aaron filed a complaint with police after Daniel Cicciaro Sr. seemed to threaten his life. White was convicted of manslaughter and sentenced to two to four years for the death of Daniel Cicciaro Jr., who he shot in the head during an altercation in August 2006. The victim's father was apoplectic following the sentencing, which he deemed inappropriately light. In front of news cameras, Cicciaro Sr. went on a profanity-laced tirade. "Let's see what happens when Aaron White gets shot!" he yelled at one point.

The elder White marched with the group 100 Blacks in Law Enforcement yesterday, calling for the arrest of Daniel Cicciaro Sr. and challenging the Southampton Town to enforce the law. A detective with the department said that an investigation was ongoing. Cicciaro claims that he was merely speaking hypothetically and addressing the judge who sentenced White, accusing him of maintaining a double standard in the justice system. This afternoon, Cicciaro said he no longer cares what happens to John White.

Photos of the Ciccioras after John White's conviction and then after his sentencing, AP