While Not Charged, NYC "Accepts Responsibility" for Failures in Deustche Bank Fire 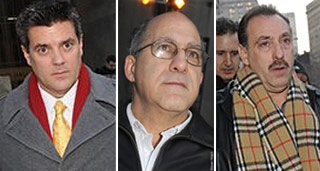 When announcing manslaughter charges against three construction supervisors (pictured) in the 2007 fatal Deutsche Bank building fire, Manhattan District Attorney Robert Morgenthau said of the tragedy, "Everyone who could have screwed up did screw up. It's just amazing the amount of mistakes that were made here."

Two firefighters, Joseph Graffagnino and Robert Beddia, died while trying to fight a 7-7-alarm fire at the 130 Liberty Street building. The building was being dismantled—a process overseen by city and state agencies—after being damaged during the 9/11 attacks. An investigation found that while the fire was started by a construction worker's (illegal) smoking, the Fire Department did not check the site as it should have (then it may have noticed how a standpipe was dismantled) nor did the Buildings Department (on site frequently) notice violations like fire exits being blocked with flammable material. Morgenthau's office issued a report about the case, and the Daily News offers some highlights. Here's one:

The Lower Manhattan Development Corp. knew about several fires inside the tower just before the deadly August 2007 blaze but did not report them.
Perhaps the saddest finding was a missed warning two weeks before the fire from a construction consultant URS Corp., which called the building "an accident waiting to happen." The general contractor, Bovis Lend Lease, could "no longer be trusted" to ensure building safety, the consultant warned.

Mitch Alvo and Salvatore DePaola, employees of subcontractor John Galt Corp., and Jeffrey Melofchik, a site-safety manager for contractor Bovis Lend Lease, were indicted, but the city escaped charges because of "legal obstacles." 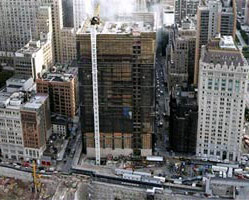 However, the city issued a statement, "We deeply regret the failures of our agencies to inspect and detect the conditions that contributed to the deaths of Firefighters Beddia and Graffagnino," which lawyers construe as a tacit admission of guilt. Lawyer Benjamin Brafman tells the Times, “This is somewhat remarkable in my judgment because the admissions by the city suggest that it recognizes their responsibility, and could well expose the city to substantial judgments that may not even have to be litigated, given the breadth of these admissions.”

However, the victims' families were unhappy that city agencies escaped charges. Graffagnino's father, Joseph Sr., told the News, "Just taking [16] months and millions of documents and thousands of man-hours, and at the end saying, 'Let's make a deal?' Why did you waste a year and a half on this sham of an investigation and not do anything?"