While Cuomo Pushes To Renew 421-A Tax Break, NYC Landlords Keep Abusing It

While Governor Andrew Cuomo takes steps to renew the controversial 421-a developer tax abatement on terms satisfactory to construction unions and the real estate industry, city and state regulators are continuing to grapple with New York City building owners who benefit from the tax break while flouting the law.

Today, the Mayor's Office announced that it has threatened 178 building owners with tax benefit revocation unless they register their apartments as rent regulated, as the law requires. Without said registration, landlords technically on the hook to preserve about 20% of their apartments below market rate aren't being held accountable.

"The 421-a tax program is a two-way street: landlords who receive these lucrative tax benefits must afford their tenants rent-stabilized leases and protections," said Attorney General Eric Schneiderman, who's been working with city and state regulators to enforce 421-a compliance since 2014.

The '70s-era tax incentive expired in January. And while real estate interests have argued that monetary incentive is essential if Mayor de Blasio hopes to achieve his goal of 80,000 new units of affordable housing over the next ten years, housing advocates have countered that the program lines the pockets of its current recipients while failing to ensure adequate affordable housing for New Yorkers.

The program cost the city $1.2 billion in 2016, and a new report from the Alliance For Tenant Power estimates $2.4 billion a year in lost tax revenue under Cuomo's tweaked renewal plan. A recent ProPublica report found that nearly two thirds of the 6,400 rental buildings currently benefiting from 421-a don't have required rent stabilization paperwork on file with the state.

In one infamous example, Two Trees Management saved more than $10 million in 421-a tax benefits on a luxury property on Court Street in Brooklyn Heights, while overcharging tenants an estimated $368,000.

"If the city can't enforce 421-a as it is, why are we going to allow developers more years of subsidies?" wondered Cea Weaver, research and policy director for New York Communities For Change, a coalition of housing advocates for low-income New Yorkers. "When the city is facing a potential devastating loss of federal money, all this is doing is allowing people like Donald Trump who are real estate tycoons to get richer and richer."

"It's great that the city finally wants to enforce the laws, but this is just more proof that they're not working," she added.

The buildings targeted in this week's sweep—with 1,400 apartments between them—allegedly committed a specific flavor of rule-evasion. Though their buildings operate as rentals, they are registered as condos or coops, skirting rent-regulation enforcement from city and state agencies.

This week marks the latest in a string of similar crackdowns. Last year, compliance letters went to landlords of 285 buildings, 35 of which had their benefits revoked this fall. According to City Hall, the rest "either proved they are in compliance, or are curing the violations that have been uncovered." A separate deal with 17 landlords had them put 408 apartments to rent stabilization and pay $5 million into a fund to build low-income housing. 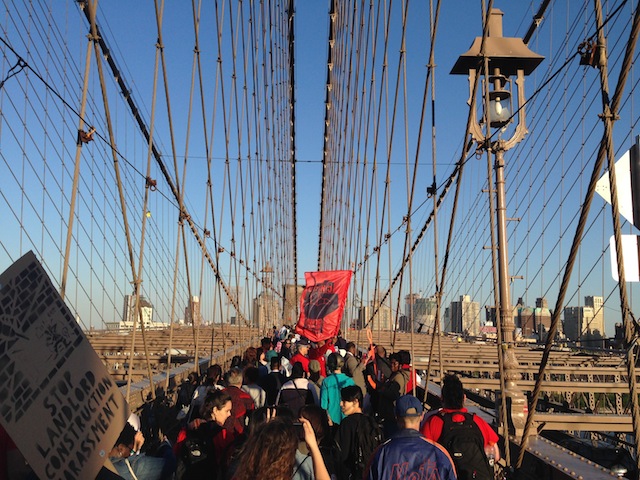 Tenants march over the Brooklyn Bridge in May 2015 opposing the renewal of 421-a and calling for stronger rent laws (Emma Whitford / Gothamist).

Legal Aid Attorney Ellen Davidson said Tuesday that while these crackdowns are encouraging, they're "a drop in the bucket."

Also on Tuesday, the City Council's Finance and Housing and Buildings committees hosted a joint hearing on legislation that would require the Department of Housing Preservation and Development to audit 20 percent of buildings currently receiving 421-a benefits—another effort to scare bad actors into compliance.

"I think the auditing is a great step to require each agency to enforce its own laws," Davidson said. "It's hard to not support a bill that says the city has an obligation to follow up when it's giving away billions of dollars a year."

Both Davidson and Weaver said that the tax revenue lost to 421-a would be better spent on rental subsidies for nonprofit developers committed to building deeply affordable housing.

"Even if that means less units overall it will be units that actually matter," Weaver said.

Appearing on WNYC's Brian Lehrer Show last week, Mayor de Blasio criticized 421-a. "We can never allow the old 421-a to come back," he said. "It was a giveaway to real estate developers. It funded luxury condos with taxpayer money and didn't do enough to create affordable housing."

But the mayor stopped short of calling for its revocation. "Our priority is ensuring that the ultimate legislation passed demands real affordable housing for our people and protects taxpayers from giveaways," said Mayoral Spokeswoman Melissa Grace.

#421-a
#affordable housing
#compliance
#Cuomo
#de Blasio
#original
Do you know the scoop? Comment below or Send us a Tip