Which Way to Turn With Hamilton Grange? 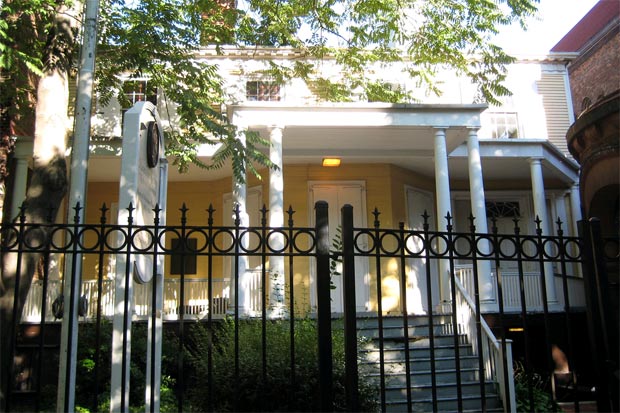 More than 200 years after its construction, preservationists aren't sure which direction Alexander Hamilton's country house should be facing. Hamilton Grange, located in Harlem, has already been moved and reoriented once, but that was just a temporary relocation undertaken in 1899. Now preservationists want to give the Federal-style country house a more permanent and less cramped site, but can't agree on what axis to place it.

After a life living and working as a lawyer, Founding Father, abolitionist, banker, politician, and molder of the United States, Alexander Hamilton was prepared to take it a little easier in a country home nine miles north of the City at what is now 143rd St., almost in the center of a small estate. The house was built in 1802 by John McComb Jr. (also an architect of City Hall); he oriented the house to face southwest to take advantage of the terrain and the natural light.

Graphic from the NY Times; pre-1889 sketch of Hamilton Grange

After Hamilton was killed in his 1804 duel with Aaron Burr, the home stayed in his family for another 30 years, but eventually wound up in the possession of St. Luke's Episcopal Church and was moved once again, now to a cramped spot on Convent Ave. north of 141st St. and reoriented along the city's grid pattern so it faces northwest.

Preservationists are planning to relocate the house once more, to St. Nicholas Park, where it will just remain within the boundaries of Hamilton's original estate, between 140th and 141st St. and reoriented so it faces northeast towards West 141st St. Stricter preservationists want the house reoriented to the southwest as McComb originally planned it. The Parks Dept. says that makes little sense in the new location, because the home would be facing straight into a steep hillside. Think of it as a battle between strict constructionists and architectural activists. Hamilton would love it.