Which NYC Government Agencies Are The Most Corrupt?

Last year, as part of our ongoing hard-hitting reportage on municipal corruption in New York City, we charted which city government agencies produced the most cases at the city's Conflict of Interest Board. The COIB handles the less serious cases: the ones that end in fines or an employee getting fired. More serious cases involving criminal prosecution go to the Department of Investigation (DOI):

DOI is one of the oldest law-enforcement agencies in the country, formed in the 1870s following a scandal in which the corrupt William “Boss” Tweed and his unscrupulous cronies skimmed millions from the City coffers. The agency investigates and refers for prosecution City employees and contractors engaged in corrupt or fraudulent activities or unethical conduct. Investigations may involve any agency, officer, elected official or employee of the City, as well as those who do business with or receive benefits from the City.

We asked DOI for a list of city departments that produced the most investigations, and after a year of number crunching, they came back to us with some stats for 2011 to 2013. Let's take a look!

First, we must note that DOI identifies "intake" reports by the DOI office they are initially assigned to, whether or not they end up getting investigated by DOI, and regardless of what office they get transferred to later on. 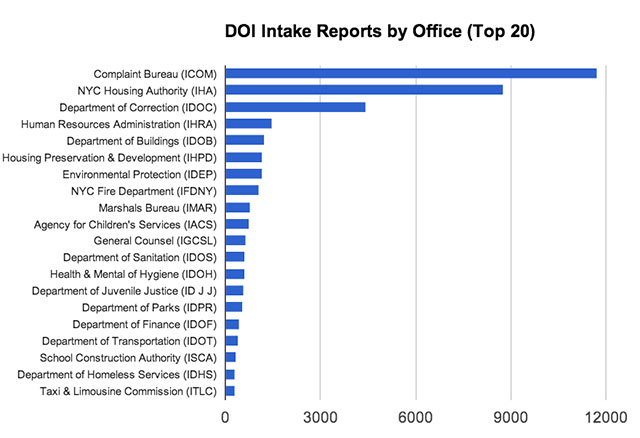 You can see that NYC Housing Authority and the Department of Corrections generate a lot of complaints, probably from irate tenants and inmates. But anyone can file a complaint—the DOI only opens full investigations for a portion of the intake reports, and this proportion is generally pretty low: 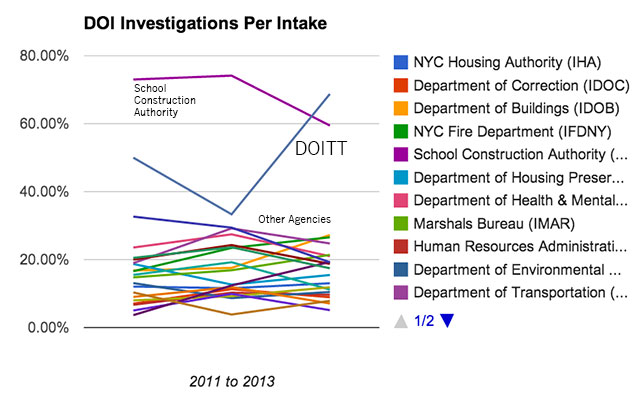 Less than 30% of intakes lead to investigations in most offices, with the exception of the School Construction Authority and Department of Information Technology and Telecommunications (DoITT)— the spike in 2013 for DOITT was probably related to greater scrutiny of tech corruption complaints after the massive Citytime scandal at the Office of Payroll Administration. 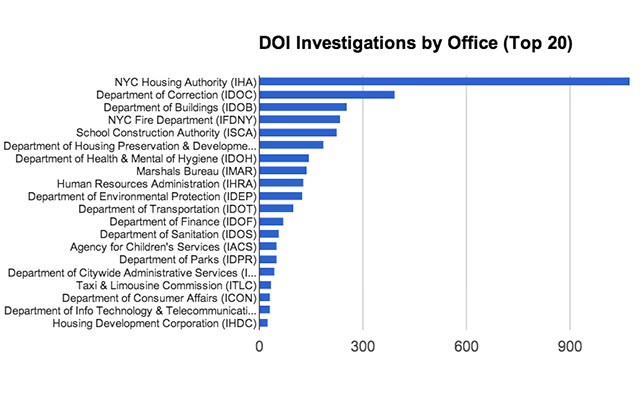 But let's look at total investigations for 2011 to 2013: it appears that NYCHA and the Department of Corrections are still in the lead! But the Department of Buildings, Fire Department, School Construction Authority, and Department of Housing Preservation and Development are also responsible for hundreds of cases each over this three year period. It's notable that four of these agencies are involved in housing or construction. Perhaps these activities offer unusual opportunities for corrupt activity?

Also notable in its absence from the list is the NYPD, which was also missing on the COIB stats—their investigations go to Internal Affairs, The Civilian Complaint Review Board, the new Inspector General, etc.

Of course, larger agencies are likely to generate more investigations, simply because they have more people working for them. So we attempted to compute an average headcount for the agency supervised by each DOI office. This was not straightforward, as some of the DOI offices supervise multiple agencies, and for five of the 52 offices, we weren't able to figure out exactly what or who they were policing. But by consulting the Office of Management and Budget yearly reports, as well as other sources, we were able to compute ballpark headcounts, which we used to compute the following list of the top 20 city agencies with more than 150 employees with the most DOI investigations per thousand employees: 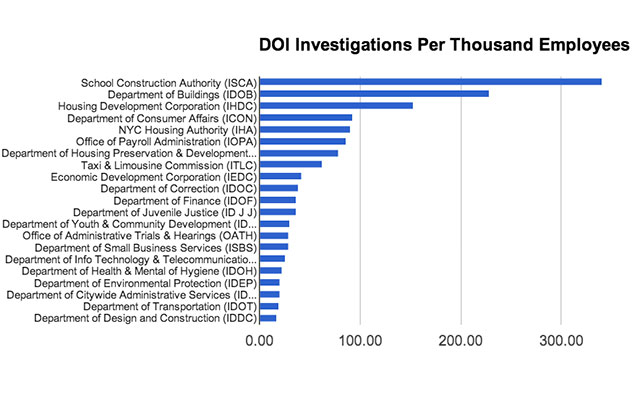 Some familiar agencies still end up at the top: The School Construction Authority, The Department of Buildings, Housing Development Corporation, HPD, and NYCHA are still in the top ten. Is housing and development truly the most corrupt area of city government?

N.B.: You can find the spreadsheets we used to run these computations at Google Docs (along with bigger graphs!), and DOI's FOIL return at Scribd. We welcome suggestions for improvements, or ideas for other data projects.

#corruption
#data
#department of investigation
#doi
#government
#infographics
#original
Do you know the scoop? Comment below or Send us a Tip