by Jessica Gould and WNYC Staff

Hundreds of New York City students rallied on the steps of the Department of Education's headquarters Thursday to call for more action on integration, pointedly chanting, "Where's our mayor?"

Organizers said the rally was timed to mark exactly two years since the mayor released a school diversity plan, and convened a task force on widespread segregation in the nation’s largest school system, where there are stark disparities among schools in terms of money, staffing and support.

The group released its first set of recommendations in February, but the administration hasn't accepted them yet. Doug Cohen, DOE spokesman, said to expect an announcement about recommendations soon.

“Our schools are stronger when they reflect the diversity of our city, and while we’ve taken real steps to integrate our schools, we know there is a lot more work to do,” he said. 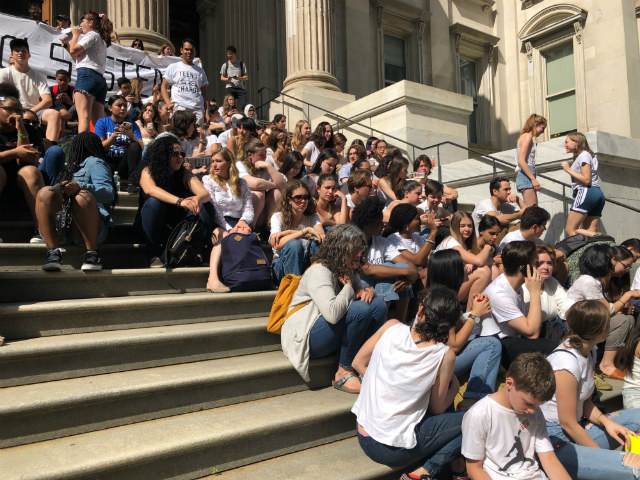 The students segregated themselves in protest (Jessica Gould / WNYC)

Ayana Smith, a member of Teens Take Charge, which organized the rally, said the image was meant to convey not just racial divisions but a lopsided distribution of resources, like school counselors, sports, even academic offerings.

“A lot of students of color attend these predominantly black and Hispanic schools and these schools tend to be under-resourced when compared to their counterparts on the other side of the steps,” she said.

Some 400 students and their supporters held five minutes of silence to mark de Blasio’s five years in office, raised their fists, and then chanted “Where’s our mayor?” One student speaker questioned whether de Blasio was too busy campaigning for president in Iowa or South Carolina to attend, although his schedule said he was in New York City. They invoked Martin Luther King Jr.’s Letter from A Birmingham Jail and the 65th anniversary of Brown vs. Board of Education of Topeka.

At the end, the students rearranged themselves into the integrated system they hope to see.

Schools Chancellor Richard Carranza has pointed to the mayor’s plan to eliminate the SHSAT for specialized schools, support for individual schools and districts that have taken on diversity plans, anti-bias training for educators and efforts toward culturally responsive curriculum among the steps the department has taken towards integration.

Matt Gonzales, director of New York Appleseed’s School Diversity Project and a member of the diversity task force, said the group expects a response from the administration on the first set of recommendations “sooner rather than later,” and it is working on its next set.

“We’re writing another report on screens and gifted and talented programs which will be out toward the end of the month or early July,” he said. “We’re not just looking at high school but middle and elementary school. Crafting policy for 1.1 million kids is not something we can really do over night.”

The first report called for the creation of a Chief Integration Officer within the Department of Education, and a requirement for schools to provide more information about their demographics. It also called for the city’s nine most racially diverse school districts—Districts 1, 2, and 3 in Manhattan, 13, 15, and 22 in Brooklyn, 27 and 28 in Queens, and 31 in Staten Island—to develop “diversity and integration plans” that would consider ways to change admissions policies to decrease segregation. Some of these districts have already started down this road.

Meanwhile, students from Democracy Prep Harlem High School who attended the rally said they wanted to see charter schools become a larger part of the conversation.

“We in our school have one student that’s white,” said Samantha Villalona. “We have low funds, we have no lunch room, we have no nurse, we only have one bathroom that we share. No gym. And no chemistry teacher.”

“De Blasio, where are you sir?” her classmate Jessica Haughton asked. “I have a problem and you need to fix it. I am tired of living in a world that was not built for me to succeed. Please stop blocking my blessings.”

On Friday, during the Ask The Mayor segment on the Brian Lehrer Show, Teens Take Charge member Tiffani Torres called to say there’s been “radio silence” from the mayor since the group met with the chancellor and other top officials to discuss their Enrollment Equity Plan weeks ago. She asked “how much longer will it take” for systemwide action on integration.

“How much longer will it take before you make the choice to end the segregationist enrollment policies in our high schools and how much more time do you need to study the issue?” Torres asked. “And before you talk about District 15 or the SHSAT, understand that we’re not talking about middle schools or specialized high schools. We’re talking about the 480 public high schools in the city that 95 percent of students attend.”

“Tiffani, with all due respect - and I do admire you as an activist, and you will be doing a lot of good in the world, and I hope you run for office one day as well - but I really think you're not hearing what we're saying to you, so I'll repeat it,” de Blasio responded, before reiterating that his “extraordinary” task force would release their report “in a matter of weeks.”

The mayor added that he was fighting the “massive injustice” of segregation at specialized high schools by focusing on getting lawmakers in Albany to eliminate the SHSAT, something key legislators have said they don’t expect to tackle before the session ends on June 19.

“That is called making priorities, because we have to change everything piece by piece,” de Blasio said. “I’m really comfortable that we are moving aggressively and we’re making the right priorities. And you’re going to see all of the products of this in the end. …. No previous mayor has focused on these issues as much as I am and my team is. We’re making a lot of changes and there are more to come”

Jessica Gould is a reporter in the newsroom at WNYC. You can follow her on Twitter at @ByJessicaGould.

#bill de blasio
#department of education
#richard carranza
#school diversity
#school segregation
Do you know the scoop? Comment below or Send us a Tip