Where To Check Out The 2010 July 4 Fireworks It's just three days until the Fourth of July and the big Macy's Fireworks Spectacular which will be over the Hudson River, for a second year in a row (the Hudson apparently allows for bigger barges, which then results in a bigger display). An estimated 40,000 shells will explode in a 26-minute period! Here's the deal:

The fireworks will be set off at about 9:20 p.m. and the barges are set up in the river between 24th and 50th Street. Macy's says:

For the best live view of the show, spectators are encouraged to stake a spot starting at approximately 4 p.m. along the West Side Highway from 24th to 57th Streets. Revelers situated along this public viewing area will enjoy front row sights of the show and a special FDNY Fireboat Water Show featuring New York’s bravest sailing two Marine Division fireboats spraying red, clear and blue water arcs up 300 feet in the air in a patriotic salute to America’s independence. Macy’s and the NYPD kindly request that spectators refrain from bringing large bags/containers, as all will be subject to security checks.

1010WINS will be airing the simulcast. For those of you at home, you can watch the NBC broadcast—not only will Nick Cannon and Alison Sweeny be hosting from the Norwegian Epic cruise, JUSTIN BIEBER will be performing. Viewing locations and a map of the barges are after the jump. And if want to share your photographs of the festivities, you can tag them "gothamist" on Flickr or send them to photos@gothamist.com! 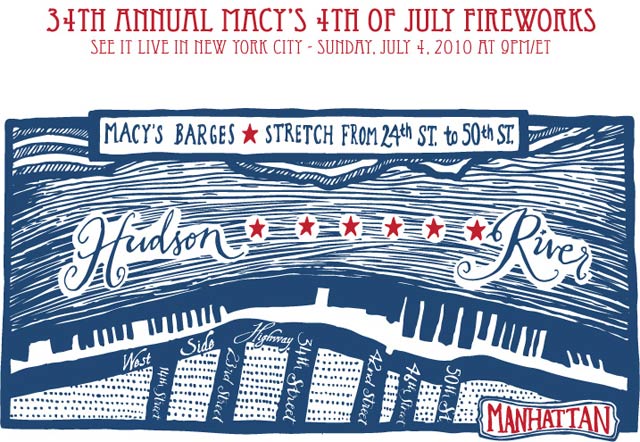 Below are further details from Macy's:

Viewing for people with disabilities will be available at Dewitt Clinton Park located W.52nd street and 11th Avenue.

VEHICULAR TRAFFIC DETOURS
West Side Highway
Vehicular traffic closed from 59th Street to 22nd Street on 12th Avenue
All North-bound traffic to be diverted at 22nd Street to 11th Avenue
All South-bound traffic to be diverted at 10th Avenue above 59th Street
THE FOLLOWING AREAS ARE NOT VIEWING LOCATIONS FOR THE
2010 MACY’S 4th Of July FIREWORKS
The East River
Battery Park
Battery Park City
All Hudson River Piers (except limited access to PIER 54 and PIER 84)
Hudson River Park Promenade between W. Houston and 59th Street
Hudson River Park Bike Path between W. Houston and 59th Street
The best way to attend the show is by public transportation via the Metropolitan Transit Authority. Due to the expected high volume of traffic, revelers are urged to leave their cars at home. Parking is not available in the viewing areas. We recommend a round trip fare with a Metrocard™ purchased in advance. Additional buses, subways and MTA trains will be available to and from the event. Local holiday schedules will be in effect. Attendees should check for exact times. For additional information please contact the MTA at the Transit Hotline (718) 330-1234, or visit www.mta.info for “Current Service Status,” as well as to plan trips with “Plan & Ride.”

The following buses, subways and commuter trains will transport viewers to and from the Macy’s Fireworks:

EMERGENCY MEDICAL FACILITIES
New York City Emergency Medical Services and health services personnel will be positioned at the major viewing locations along 12th Avenue between 22nd and 59th Streets. For further assistance, contact a policeman in your viewing area.

WATERCRAFT VIEWING
The Coast Guard will establish a safety zone and spectator vessel viewing areas throughout portions of the Hudson River, which will be in effect from approximately 7:30pm to 11:00pm on the 4th of July. No vessels will be allowed to transit the Safety Zone without the permission of the Captain of the Port. No vessel will be allowed to anchor in the spectator viewing areas. The limits of this safety zone will be delineated by the following boundaries.
Waterway Restriction Northern Boundary: North of a line drawn from Pier 11A, Weehawken, NJ to 70th Street, Manhattan, NY.

#fireworks
#july 4
#macy's fireworks
Do you know the scoop? Comment below or Send us a Tip