Where The Ball Drops: 1 Times Square 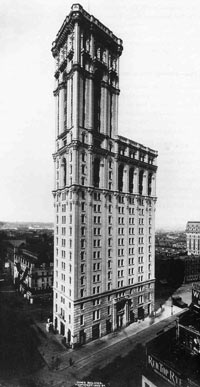 Tonight at 11:59 pm, all eyes will be on the illuminated Waterford crystal ball that takes sixty seconds to descend, announcing a new year. It's an annual ritual shared by more people than could possibly pack into Times Square since the advent of television, and what is often overlooked or unnoticed is the building that the illuminated sphere is perched upon. 1 Times Square was the eponymous address of the crossroads of the world. The New York Times was written there and printing presses churned out issues from the basement.

Other than being one of the first midtown skyscrapers, One Times Square became notable for its introduction of the "zipper" news display, which fed breaking stories to New Yorkers and the world as soon as they became available. According to NYC-Architecture.com, people were celebrating New Year's Eve atop the building after its completion in 1904. The public ball-drop ceremony began 100 years ago, in 1907.

Due to the physical dimensions of the address and structure of the building, modern businesses found One Times Square somewhat impractical. In a fit of modern architectural insanity, the marble and terra cotta exterior was replaced with concrete and steel cladding. Eventually, the physical location made the exterior more valuable than the building itself, and the beautiful early century skyscraper was transformed to a featureless easel for profitable advertising (see here).

While it might seem that the address on 42nd St. is priceless, real estate investors have deemed that the refurbishment of the property would not be worthwhile considering the millions of dollars gained from the advertising revenue the property currently generates. If you're watching the ball drop this evening, try to envision the building that once was, while wishing for a better New Year.