Where Can You Safely Shoot Up In NYC?

On a Tuesday afternoon in Washington Heights’ Highbridge Park, two men and one woman smoking crack-cocaine greeted a couple leaving the park with a handful of syringes. Down a short trail nearby was “The Rock,” where, as its name implies, a rock serves as a seat in a space situated out of view from the street. It was littered with Dutch Master tubes, orange syringe caps, sanitary wipes, and a couple of used syringes.

Husband-and-wife Misty and Davian Lauer had just gotten high down past the Rock, and said they often inject in “public restrooms or the park” like this one.

The Lauers have Hepatitis C, and are adamant about using a clean needle every time they shoot up.

“I try to get about 50-100 [syringes] to last me a week. I give a lot away, too, so I always try to have a healthy stock of them” Misty said, adding that they were also carrying eight naloxone kits, in case of overdose, which they hand out as well.

Davian Lauer, who was casually holding a pack of syringes as he exited the park, said he had been involved with harm reduction for 15 years since he began volunteering at a syringe exchange in Denver, Colorado.

The Rock is a couple blocks from the Washington Heights Community Outreach and Resources, Needle Exchange, and Harm Reduction (CORNER) Project.

The Lauers utilize the syringe exchange program there, as well as HIV/Hepatitis C testing. They credited the project with saving lives and raising awareness about how to avoid health risks associated with drug injection. 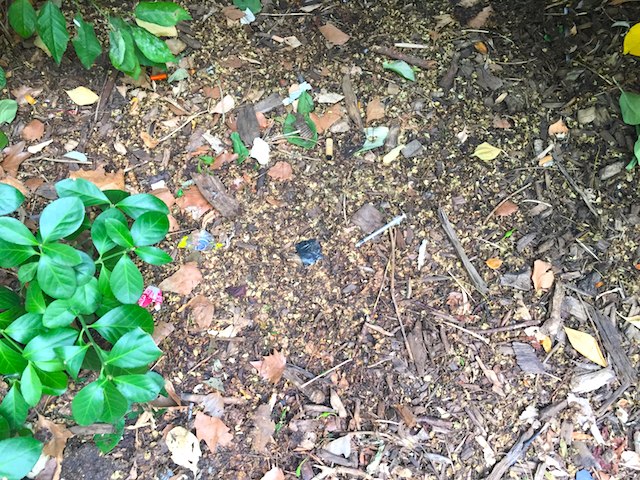 To combat this spike in heroin-related deaths, advocacy groups in New York City have launched a campaign to raise support for Supervised-Injection Facilities (SIFs), a cutting-edge harm reduction technique they say would significantly reduce infections, disease, and deaths associated with intravenous drug use.

SIFs allow heroin-users to legally inject in a space where clean supplies are available, staff is trained to respond to overdose, and transition to a detox program is typically available but not mandatory. Like syringe exchange programs and other harm reduction tactics, SIFs seek to minimize adverse health risks by accepting drug-use rather than utilizing a “Just Say No” rhetoric. The concept is controversial in North America, where the only SIF exists in Vancouver, British Columbia. Worldwide, there are at least 98 SIFs in 66 cities.

To compliment the campaign for SIFs in New York (which is in its very early stages, and will feature a town hall on September 30th), Matt Curtis, the policy director of VOCAL-NY, and Taeko Frost, executive director of Washington Height’s CORNER Project, created the short film, Everywhere But Safe: Public Injection in New York, a documentary that explores the harmful public health outcomes of public injection in New York State and City.

The film shows that the consequences of injecting in a space without sanitary supplies or the time to carefully set-up a clean shot can be dire: abscesses, soft-tissue injection and infection, Hepatitis C, HIV/AIDS, and even death from overdose. It also sheds light on the consequences public injection can have on entire communities. As many participants in syringe-exchange programs across the city told Gothamist, New York’s heroin users often inject in public and semi-private places like parks and bathrooms, simply because they have nowhere else to go. Many of them are homeless.

“Most of the time, I do it in the street, under the bridge, on top of the bridge,” Alberto, a fifty-three-year-old participant at NYHRE, who is homeless, told us. He was sure to qualify that he was “not doing it in public” because he keeps his injection out of view, looking out for passers-by and children.

But searching for a discrete place to inject is not easy.

“I have to break the law. I have to go trespassing. I have to, you know, break something,” Alberto said, adding that some people drop their injection supplies on the street.

Before fifty-year-old Angel Ramos, who was utilizing the same exchange in Harlem, had a place to stay, “I [went] to parks, street, quick places,” He said that “too many people” are “out on the street.” 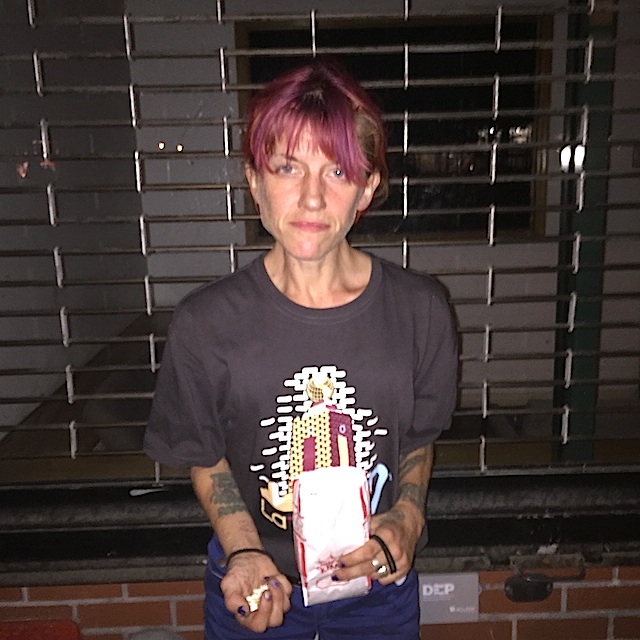 Another participant at NYHRE’s sidewalk shop, William Acilea, was concerned public injection may increase children’s exposure to drugs and influence their decision to use. The homeless, he said, “go to bridges, they go to FDR Drive and places that’s no good because there’s kids around here, and they might see that.”

“I’m not condemning what they do,” Acilea said, “Some people don’t have safe places to go.”

Each of them noted that public injection subjects users to arrest, robbery and assault, and untreated overdose if the area is out of public view.

At Marcus Garvey Park in Harlem, an employee who was pushing a dumpster said he finds syringes daily, and has for the nearly two-decades he spent on the job.

While noting that “this dope they got back in Harlem again is devastating,” he said public injection is part of a larger issue plaguing parks. “Nobody’s concerned about the homeless. That’s the problem,” he said.

A spokesperson for the NYC Department of Parks and Recreation told Gothamist that Parks’ Medical Waste Removal Crews “are deployed in each borough on an as-needed basis, as indicated by our Parks Inspection Program,” but could not provide information on the crews by specific parks or neighborhoods. 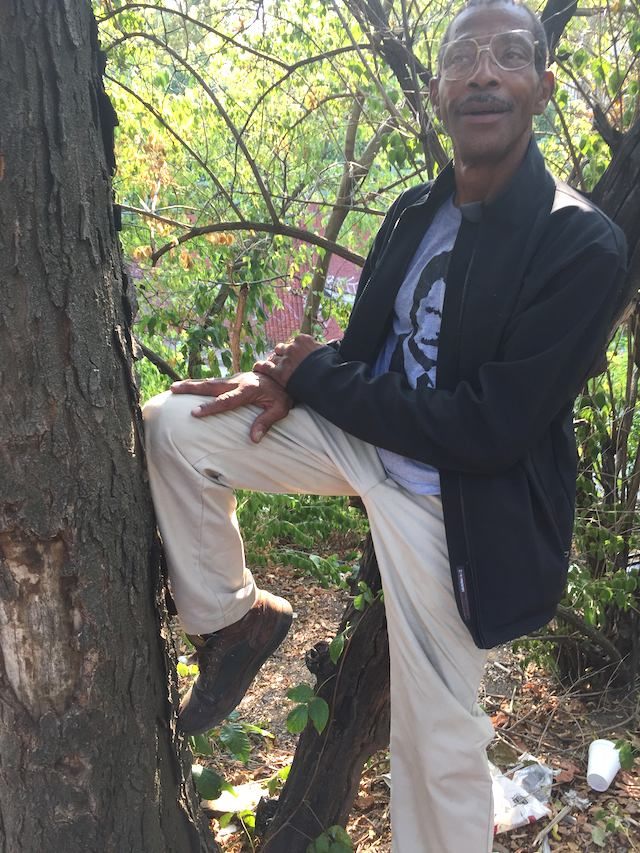 For heroin users who might not be able to spend a couple bucks on the new syringe they need for each shot, or for whom securing clean “works” like new cotton and cookers is a hassle, syringe-exchange is vital, and even life-saving.

Syringe-exchange participant Amy “Drifter” O’Sullivan, who is also featured in the film, said that she once suffered from severe health problems linked to her injecting. O’Sullivan had a multi-chambered abscess—“one right below the other”—that required surgery, a week in the hospital, and follow-up home visits from a nurse who would change dressings and administer antibiotics.

Now, O’Sullivan usually gets high at VOCAL-NY, which has turned their bathrooms into a sort-of under-the-radar, slimmed-down version of a SIF where patrons have access to a steel counter, soap, hand dryers, and a syringe disposal box, as well as an intercom system should they have any problems. The door can be unlocked from the outside, and a timer counts how long a participant has been inside. The CORNER Project implemented the concept in 2008, and groups like VOCAL followed suit.

“People were overdosing in our bathroom, and as a good citizen and technically a business owner, we wanted to make sure there were safety precautions,” Frost said, adding that the CORNER Project has reversed “probably close to 60 overdoses on-site.”

The benefits of harm reduction are not lost on participants. T.T., a jovial man who was homeless and smoking crack-cocaine in Highbridge Park earlier this month, said the Washington Heights CORNER Project a couple blocks away from the park “has become a landmark for Washington Heights because it provides showers, laundry services, rubbers for stems, needle exchange, condoms, alcohol wipes, doctors, lawyers and all kinds of stuff for people like us to help us be straight.”

Programs like the CORNER Project, participants emphasized, save lives.

Opponents to SIFs would argue that the sites promote drug-use and offer no morbid incentive, like death or disease, to quit. But there is no evidence that punishing people who are already stigmatized by and ashamed of their drug use may actually encourage them to enter treatment. The opposite may actually be true.

A study in the Lancet [PDF] found that since Vancouver’s SIF Insite opened in 2003, the surrounding neighborhood saw a 35% decrease in overdose, compared to a 9% reduction in overdose in the rest of the city. Detox rates for participants also doubled when compared to other users.

Courtney Lovell, program officer for Young People in Recovery, said in the film that she felt “alone” and “isolated” when she was addicted to heroin, and that acceptance contributed to her recovery. Now sober, she says, “All it took was people believing in me … people showing me that I might be worth a little more than that.”

Lovell, like other harm reduction advocates, notes in the film that forcing someone into drug treatment is not effective, but “re-traumatizing” to people who have already experienced so much suffering and loss. Harm reduction and SIFs, she says, provide safe space where addicts may grow to trust the staff ensuring their safety. “That’s what all this work is for, is to provide people with just little taste of dignity because that taste of dignity can grow into an entire appetite for self care,” she said.

Speaking to Gothamist, Curtis echoed Lovell’s call for programs that humanize rather than punish drug-users. “Part of this campaign is about using SIFs and the public injection issue not only to win, but to bring people closer to re-conceptualizing how we think about drug users,” Curtis said. “We wish the rest of society could learn what we learned, which is that drug users are normal people.”

#heroin
#homelessness
#public injection
#SIFs
#vocal-ny
#war on drugs
#longform
#original
Do you know the scoop? Comment below or Send us a Tip