When Will Snow Hit NYC This Year?

The humidity has been lifting, and by next Monday we're projected to only hit a high of 59 degrees! So when is the snow going to hit, making us pine for the days the subway platform felt like a bikram yoga studio?

According to Weather.com, the average first date of snowfall in New York City is December 15th (though it's happened as early October 21st, back in 1952). Here's the magic formula they used:

It's unclear if they factored in dying polar bears to this equation, however. 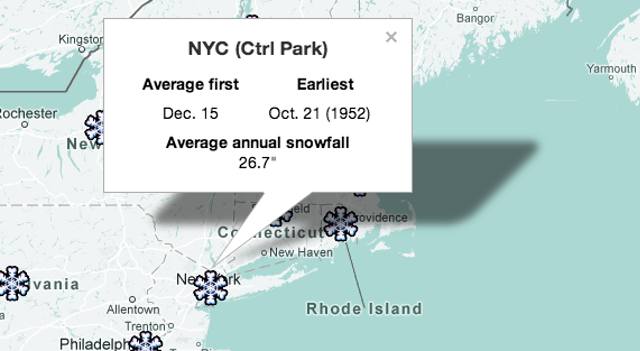 Either way, this gives us plenty of time to think of an alternative to the following phrases, which have worn out their welcome: Blizzardgeddon, Snowpocalypse, and Snowtorious BIG (actually we still kind of like that one).

#first snowfall
#snow
#weather
Do you know the scoop? Comment below or Send us a Tip