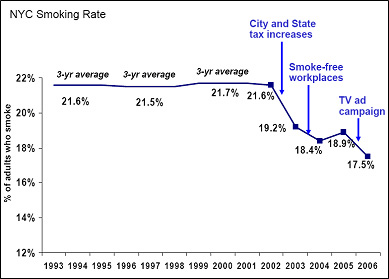 Thanks to a vigorous anti-smoking campaign, the number of New Yorkers lighting up since 2002 has plummeted 20%. This amounts to 240,000 fewer smokers City puffers than there were five years ago. There are currently fewer smokers than ever in NYC history with about 18% of citizens doing the deed. In fact, there are only five states in the country with a lower smoking rate (CA, WA, ID, UT, and CT).

This is all according to the CDC's Morbidity and Mortality Weekly Report (MMWR). The decline is being attributed to a tax on tobacco products, the restriction of smoking in public places, and "hard-hitting" ads which graphically delineated the untoward effects of the habit - including the particularly poignant Ronaldo Martinez campaign which featured a New Yorker who lost his voicebox to smoking-induced cancer and scared the bejesus out of us with an electrolarynx. These new findings are felt to translate into 80,000 fewer preventable deaths. Other highlights from the report: