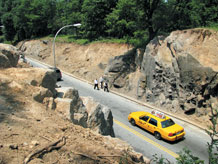 The walls, noted as "neglected and abused" in a 1989 Times Article, have had loose rocks fall onto 97th Street, so a company was dispatched to remedy the problem. However, community members found that a contractor was tearing down sections of the rock walls. Preservationists are rarely happy with piles of rubble, but an engineer estimated a full collapse of the walls being just "a winter or two away." The walls are under the jurisdiction of three city agencies, the Parks Department, Department of Transportation and the Department of Environmental Protection, which apparently contributes to lack of attention to the roads.

Last week city officials met with some of the preservationists to discuss the walls, and Metro reported back saying that promises were made to plant vegetation and "regroup before deciding how to restore the demolished walls." However, questions were raised about where the money would come from for preservation. Perhaps the Central Park Conservancy?

#central park
#preservation
#rocks
#wall
#walls
Do you know the scoop? Comment below or Send us a Tip