When A Construction Site's Retaining Wall Collapses, Neighbors Must Evacuate

Hundreds of residents near West 97th Street and Columbus Avenue were evacuated when a retaining wall collapsed last night.

The wall, at a three-block long construction site for the 808 Columbus Avenue development (which willinclude a big retail center with a Whole Foods), was next to 784 Columbus Avenue, which has 288 apartments. The "wooden" retaining wall fell, exposing 784's foundation.

784 Columbus Avenue's residents were taken to PS 163 as a temporary shelter; one told WABC 7, "I'm not surprised that this happened. I don't know what caused it but they're building or rather they're demolishing and excavating extremely close to the building." Manhattan Borough President Scott Stringer, who used to represent the Upper West Side as an Assemblyman, told the Times, "This partial collapse has been predicted for months. There have been tremendous complaints on this site, the likes of which I have never seen.”

The Department of Buildings issued a stop work order and is investigating the collapse; the early hypothesis is that blasting may have caused the collapse. Most residents were able to return, except for those living in the corner near the collapse. WNBC, which has video of the collapse, reports that calls to the foundation contractor and construction company were unanswered.

Update: Joe Schumacher walked by the construction site earlier this week and took some photographs, including the one below. We believe that must be 784 Columbus behind that wooden retaining wall. 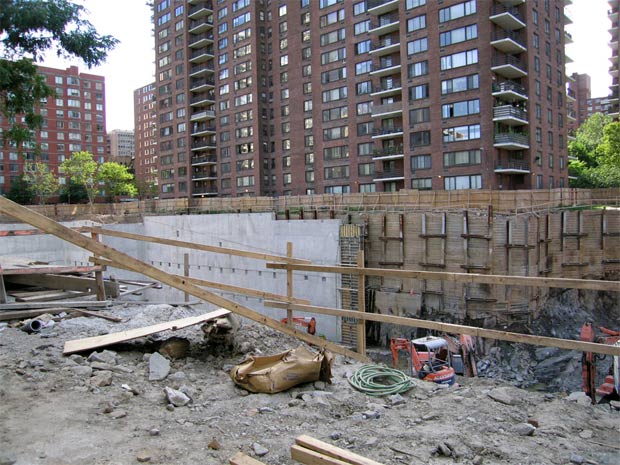