Last August the $5 million Squibb Park Pedestrian Bridge in Brooklyn closed without warning. The bridge had only been constructed a year prior, but just before it closed the bouncy-by-design bridge had developed a noticeable and unsettling tilt. At the time, the Brooklyn Bridge Park Corporation told us:

"Warping of the bridge is expected from time to time due to use and temp fluctuations and requires the re-adjustment of cable tensions. During the most recent adjustments last month, our bridge engineers registered greater movement than usual at one of the spans. The bridge was closed in order to conduct more intensive monitoring, as well as find the cause for this movement. We expect necessary adjustments to be made and the bridge to reopen in the next 2-3 weeks."

Recently there have been blaring siren EXCLUSIVES about the bridge, and the "mystery" of its closure. Are there trolls living underneath? Did the ghost of Robert Moses start haunting it? Does the bridge have bed bugs? What do people think is wrong with the bridge? At a recent meeting, even Councilman Steve Levin, who is on the park’s board of directors, declared, “We really want to know exactly what happened... If it’s a design or construction problem we want to know.”

The Brooklyn Bridge Park Corporation is sticking to their story, and told us last week: "The bridge was closed due to a misalignment issue, and engineers are working to determine the cause of that issue and repair the bridge." However, this time they've added that, "Specifically, they're pulling it back into alignment and adding additional braces to keep it in alignment."

It will cost around $700K to make the repairs. Is that worth it? After all, people can just walk down the hill in the same amount of time. Last week, the Brooklyn Eagle reported that after the board approved money for repairs, "board member Zeeshan Ott, deputy chief of staff for state Sen. Daniel Squadron, asked about the necessity of authorizing the funds 'for a bridge that’s a couple years old [and] cost $5 million in the first place,'" adding, "We want the bridge open but we want to make sure there’s further work done afterwards."

The BBPC tells us, "Absolutely" it's worth it, "We know how much the public loves the bridge and we’re looking forward to reopening once its safe to enjoy." Given last summer's declaration that warping is expected from time to time, we've asked if this kind of money will be needed for future repairs, as well, and will update if we find out. 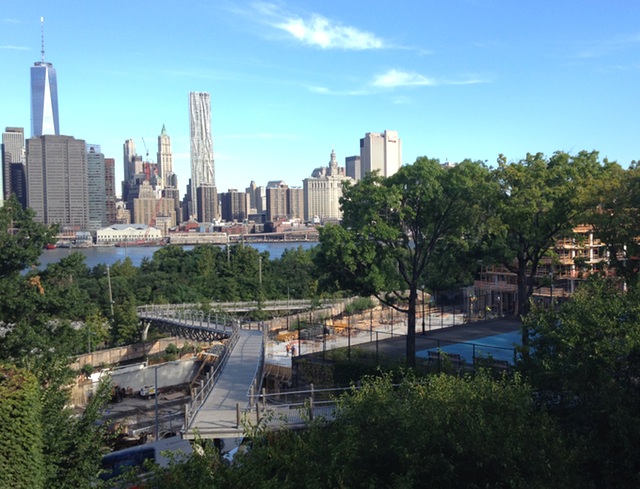 The controversial Pierhouse project, in the meantime, has been building up on either side of the bridge. The Brooklyn Bridge Park Corporation told us that Pierhouse (the condo portion) will open in mid-2016, but there is also a hotel and rooftop bar, on the northern side only, which is expected to open later this year. By that time, the bridge should be up to code and ready to handle foot traffic once again, as it's expected to reopen this spring.