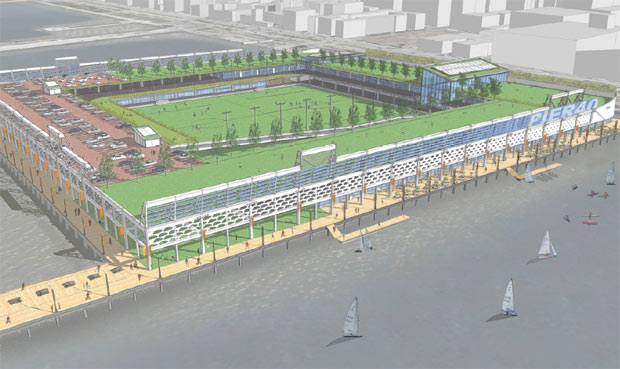 The fate of Pier 40, located at West Houston Street on the Hudson, was much discussed and debated last year, and 2008 seems to be a year of further reflection. At one point, there was a $625 million idea for it to become an elaborate entertainment venue with a Cirque du Soleil theater, restaurants, and more, while opposing forces wanted there simply to be more green space.

In the waning weeks of December, another group offered up a third plan from the Pier 40 Partnership (made up of local parents), one that heralds green space as well as schools and artist studios, plus a much higher price tag to fix and build out the pier - $125 million versus the Hudson River Park Trust's estimate of $30 million. The partnership also said that the way to build the Pier 40 would be, as the Downtown Express reported, create a "non-profit conservancy with access to tax-free bonds."

The Hudson River Park Trust only has the "Vegas on the Hudson" plan from developer Related and the "People's Pier" plan on their site. If you're interested in the Pier 40 Partnershipplan study, you can download the PDF here. Most of the revenue would be generated by...parking!