Governor Spitzer's sudden Tuesday announcement that he would ask the MTA to keep the base subway and bus fare at $2 continues to draw skeptics of all kinds. Since the MTA just found an extra $220 million on their balance sheets, though additional revenues, real estate taxes, underspending and debt service costs, Spitzer said that the additional funds could be used to avert a base fare hike. Hurrah? Well, yes, but... 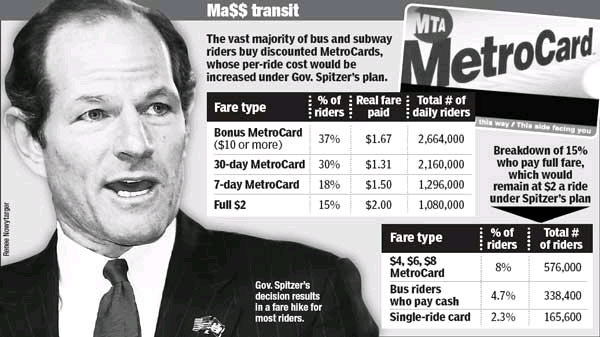 The Straphangers' Campaign is also worried that the MTA will eliminate the 20% discount on pay-per-ride cards (like the $10 card that gives you 6 rides - an extra ride for free). The Straphangers' Gene Russianoff said, "I'd rather they do more to save the pay-per-ride bonus than the unlimited card rides because that is the most popular discount for lower income riders."

The Daily News, which had asked the MTA and Spitzer to "Halt the Hike," looks at accusations of whether Spitzer made the fare-stays-at-$2 announcement to stop a public approval ratings free fall. Naturally, Spitzer denied this.