What's Eating You? A Short Guide To Bedbugs & Bedbug Impostors In NYC

Despite news that reported bedbug infestations have dropped significantly since 2010, this summer was still fraught with bedbug hysteria, spurred in part to the discovery of a few infested N train conductor cabs. That, naturally, sparked an onslaught of BEDBUGS ON THE SUBWAY-related hysteria, with trains getting pulled out of service left and right thanks to reported bug sightings.

We spoke with Lou Sorkin, the American Museum of Natural History's resident entomologist, about whether or not all this bedbug hysteria is unwarranted. He says that though officials believe we're winning this bedbug war, that may not be the case. "[Infestations] are just not being reported as much as they used to be," he told us. "And a lot of the reporters or writers who investigated this went off of the 311 calls that dropped off from a high point before, so they interpreted that as fewer bed bug calls meaning fewer bed bug infestations. But it’s just that people didn’t call, that’s all."

Then again, Sorkin cautions that these so-called subway bedbug sightings might not be what they seem. "I think people are overreacting, because they’re not really sure what bed bugs look like for the most part. They can misidentify anything they see as a bed bug," he said. "A lot of the infestations that were identified were where the conductors were sitting, it wasn’t the public area." And it turns out there are a whole host of bugs that are often mistaken for bedbugs in homes and even on the subway—here are some common ones, and if you spy one of these guys in your apartment or on the F train, try not to freak out. 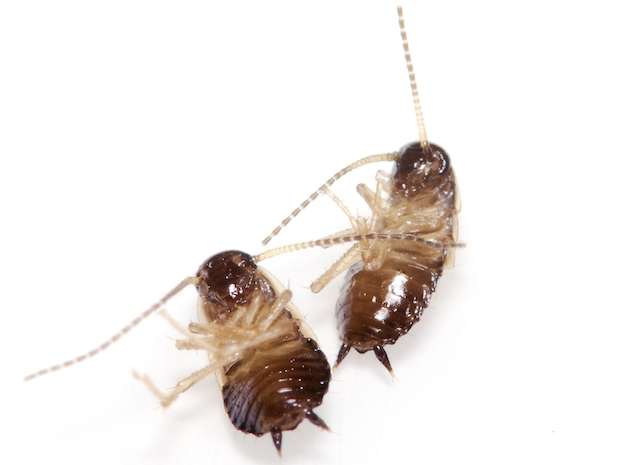 Most experienced city dwellers are regrettably familiar enough with the adult cockroach not to mistake it for a tiny bedbug. But Sorkin says it's actually fairly common for people to misidentify roach nymphs, which are wingless, smaller and less recognizable in color. "Cockroach nymphs [are] smallish and dark are sometimes mistaken for bed bugs," Sorkin told us. "Basically what it comes down to is that people don’t really know what bed bugs look like, so anything that moves can be identified as a bed bug, especially if they find it in their bed." Unfortunately, a roach infestation can be pretty hard to eradicate, and if you've got one it might be a good idea to call in the pros. 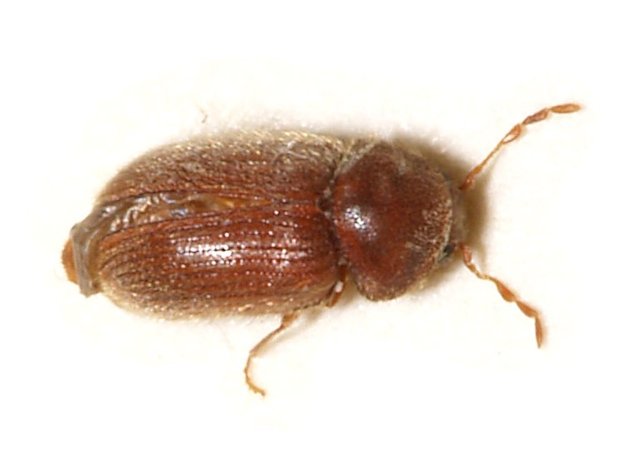 I found one of these guys crawling on my pillow last summer, resulting in a sleepless night spent on Bedbugger trying to determine if this tiny brown thing was indeed a dreaded Bedbug. And I'm not the only one who's been tricked by the dreaded Drugstore beetle, which earns its name thanks to its tendency to infest stored products and old timey pharmaceutical herbs. Sorkin says these guys are often mistaken for bedbugs, and their infestations are no trifling matter. "You have to find out what they’re infesting. It could be potpourri, which is common. They like spices, so paprika is a pretty commonly infested thing," he told us, adding that they also go after dried plants and forgotten rodent baits.

On the (maybe?) bright side, if you're finding suspicious bites on your body and notice your apartment's filled with drugstore beetles, don't panic over bedbugs just yet—Sorkin says drugstore beetles can have wasp parasites in their population, and these tiny little creatures leave stings that can be misidentified as bedbug bites. "To complicate matters, the female wasps are wingless so many people misidentify those little wasps as ants, and don’t think of them as something that can sting," Sorkin said. "They put baits out to get rid of ants, and even pest control companies will come in and misidentify them." Bugs are such tricksters! 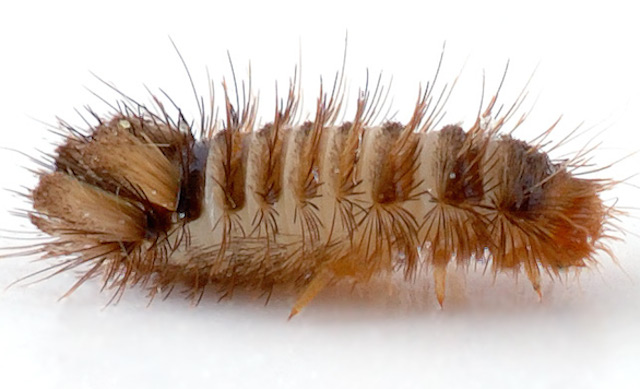 A carpet beetle is another faux-bedbug culprit. Though these little guys don't necessarily look like bedbugs—"They’re differently colored, more compact, and they have brown, yellow, orange scales on their bodies," per Sorkin—carpet beetle larvae have little hairs that can cause skin reactions similar to bedbug bites. Popular bedbug resource site Bedbugger has forums filled with stories about people who panicked over potential bug bites, only to discover they were merely suffering from an allergic reaction to these fuzzy things. "People also find shed skins of carpet beetle larvae and think those are the shed skins of [bedbug] nymphs," Sorkin told us.

Then again, if you're getting bedbug-like bites on the regular, and finding other bedbug-related evidence (fecal matter, bloodstained sheets, etc.), you're not in the clear just because you find a carpet beetle (and the same goes for all the buggies on this list). 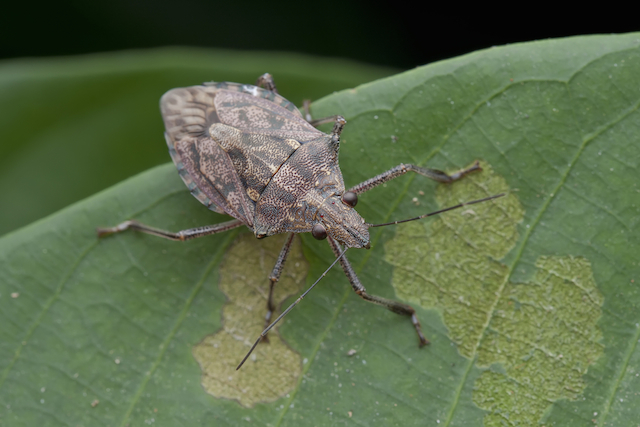 No, a stinkbug does not look like a bedbug. But Sorkin says people who are unfamiliar with bedbugs might still freak out if they find these in their home, or on the subway. "They're enormous bugs compared to bedbugs, but they can be misidentified because people don't necessarily know what bedbugs look like," Sorkin says. "In many reported cases or many media reports, there might be pictures of bed bugs, but if you don’t see a live one, or an immature one and an adult, you don’t see the size differences or the color differences between them."

Also, don't squash a stink bug. They do stink. 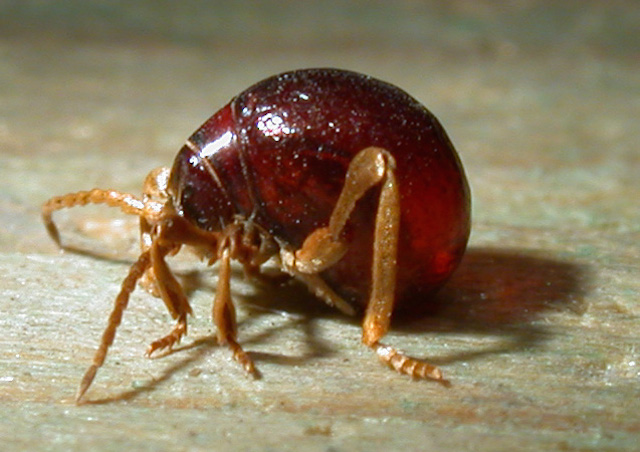 Spider beetles boast big, round, reddish midsections that sometimes look like bedbug torsos post-feeding time. But upon closer inspection, you will find that, no, a spider beetle is not a bedbug. Sorkin says that like drugstore beetles spider beetle larvae feed on food items, but they're also drawn to dead animals. "That could be dead mice, that could be mouse droppings, that could be bird nests, bird droppings from pigeons or starlings, or English sparrows," Sorkin says. So if you have spider beetles you don't necessarily have bedbugs—but you might have mice! Vermin are fun. 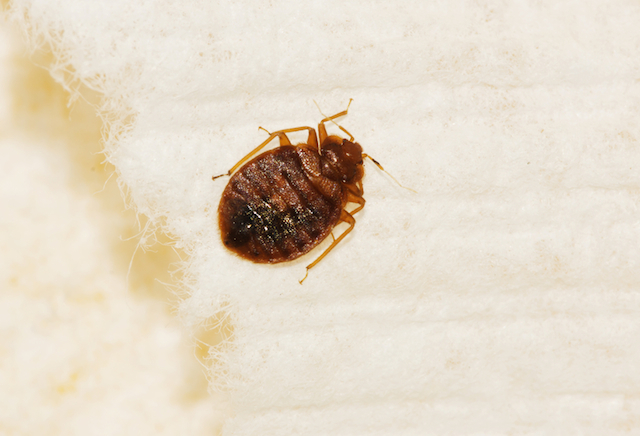 LOL these guys! Bedbugs go through a number of life stages, and it's a good idea to familiarize yourself with nymphs, adults, just-fed adults and the like so you know what you're looking for if you suspect you a) have an infestation or b) saw one crawling on you during a movie.

Sorkin says if you think you have bedbugs in your home, it's a good idea to use some sort of monitor to see if any bugs are crawling around. You can purchase climb-up monitors that will trap any buggies trying to scamper up your bedframe, or you can try some nifty DIY techniques. "I recommend some people take folded washcloths, but not white because it may be harder to see the nymphs. Use a pastel colored one," Sorkin says. "This is from studies from along time ago, but dirty socks attract bed bugs so you could also leave folded socks around. People also use glue boards. But sometimes bed bugs won’t get caught in glue boards or once they get caught they’ll remember and they’ll stay away from glue."

And did you know bedbugs pheromones emit a specific smell? "Some people describe it as a raspberry scent. I think of it more of like a spicy kind of a cilantro, coriander kind of thing," Sorkin says.

Most importantly, if you suspect you have bedbugs, report it to someone—a landlord, a reputable exterminator—as soon as possible. "People are winning the bedbug fight because there are infestations in homes and apartments, and they’re being treated and the bedbug problem is gone," Sorkin says. "But there are occasions, of course, where people have an infestation and they’re reluctant to tell anyone. They'll do the treatment on their own, which may be the wrong treatment, and by doing that, the bed bugs will start moving around more, and get into places where they weren’t before. That may mean they’re getting more into the walls or crawling around on wires and getting into other apartments."

The war's not over yet, folks. Soldier on, soldier on—and for more bedbug-related advice, here's what our Native New Yorker had to say about coping with an infestation.

#bedbug wars
#bedbugs
#lou sorkin
#longform
#original
Do you know the scoop? Comment below or Send us a Tip