What You Should Know About Sunday's Massive Climate March

World leaders are converging at the UN next Tuesday to show how very serious they are about tackling climate change, coupling stern rhetoric with the same cataclysmic inaction on which we’ve come to rely. In an effort to shake them out of their planet-killing torpor, a coalition of activists, environmentalists, unions, and community groups are staging the People’s Climate March, billed as the “largest climate march in history,” with more than 1,000 partnering organizations bringing hundreds of buses of protesters. The organizers are promising to “change everything.” But how?

You might expect an action directed at sending an urgent message to the decision makers gathering at the United Nations to occur at or near the United Nations. At least within sight of the United Nations? Perhaps the march might pass through an area where leaders on their way to the United Nations might see it? Or, they could march through Times Square, the symbolic cross-roads of the world, or some similarly highly trafficked area?

Instead, this demonstration will demand the attention of the climate conference attendees from the west side of Manhattan, and on Sunday, two days before they show up for the conference.

The NYPD-approved route starts on the west side of Central Park before weaving down 6th Avenue and banking west into the graveyard of all public visibility that is 11th Avenue. Those car dealerships and the tourists waiting in line for Daily Show tickets will have no choice but to finally open their eyes to the global catastrophe these policies are wreaking! 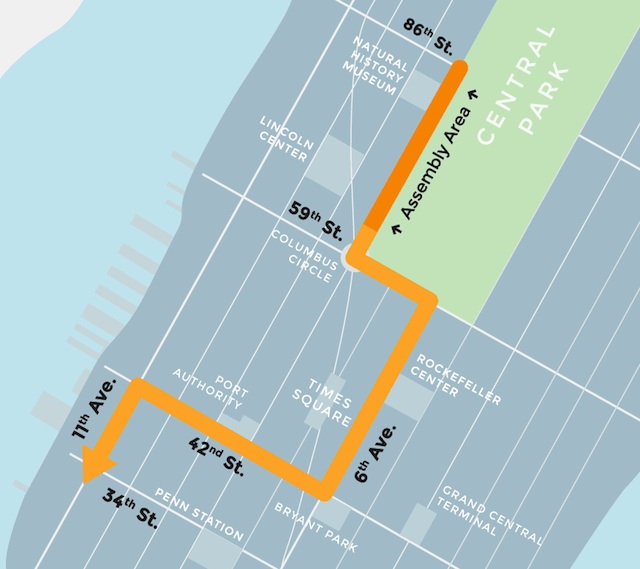 Inveterate scold Chris Hedges, in characteristically cranky form, recently dismissed the march as “the last gasp of climate-change liberals” and “a climate-themed street fair” characterized by a total “failure to adopt a meaningful agenda or pose a genuine threat to power.”

March organizers say Hedges's critique misses the point. The march isn’t about making specific demands, blockading the UN, or shutting down New York City. Notwithstanding their urgent plea, this march is actually the first tentative outing of a broader movement, a coalition that includes not only the usual white environmentalists, but unions and representatives of the (frequently poor and minority) communities hit hardest by the effects of climate change.

“We want to communicate to world leaders that there is a large, diverse and mobilized constituency to hold them to account,” says Paul Getsos, a long-time NYC organizer who is helping to plan the march. “This is not the old kind of climate march where we’re just talking about polar bears. It’s bigger than that. We’re talking about environmental racism and climate justice.”

Of course, the price of such a big tent is that some of the participants are reluctant to pursue confrontational tactics. Big unions can turn out huge numbers, but are generally leery of civil disobedience, arrests, or even deviating from rigidly policed march routes. Immigrant organizations, whose members may have a less-than bulletproof immigration status, are understandably leery of doing anything that might arouse the ire of the NYPD. Parents planning on bringing their kids feel the same way.

“In order to offer a demonstration to people that they felt comfortable going to, where they wouldn’t be putting themselves at risk, we felt we had to negotiate with the police,” says Leslie Cagan, who headed up the march's talks with the NYPD.

Of course, the NYPD isn't always in the mood for negotiation. Cagan says the department took more than a month to even respond to their first permit request. “We kept saying, ‘We need to meet with you, we need to meet with you,’ and they kept putting it off,” she said. With tens of thousands of people converging on the city, organizers needed to pin down a date. But even once communication was established, the NYPD took another month to finalize a permit for Sunday's event.

The organizers didn’t even ask for a march route near the United Nations. “Sunday afternoon there are no people on the Upper East Side anyway,” Cagan says. “They have security measures going up at the UN starting Saturday, and we knew from experience that getting the police to let you march on First Avenue is even more difficult than getting them to let you into Times Square.”

Negotiators did try to get a permit to march through Times Square, but the NYPD nixed that. Cagan looks on the bright side: “The good news is that once we did settle with them that we weren't going to Times Square, since then everything has been extremely easy, and the dynamic with the police has been very good,” she says.

Getsos says judging the march by its NYPD-dictated route into the oblivion of 11th Avenue is a mistake. “The radicalness is not in the tactics,” he says. “It's in the broader coalition being built.” 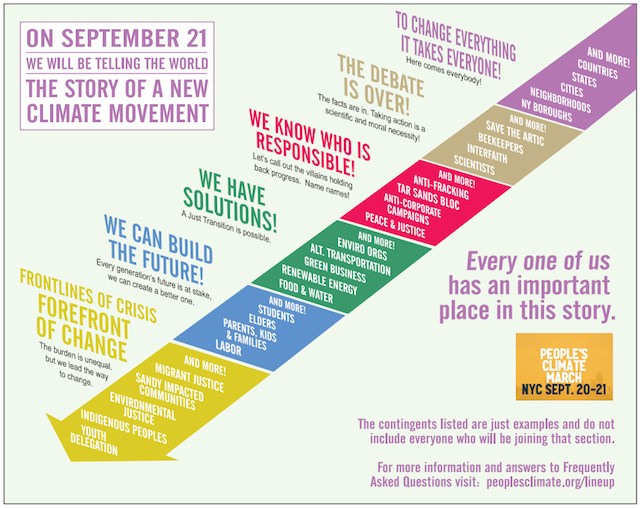 One interesting coalition piggybacking on the UN meeting is The Climate Group, an organization backed by the likes of Goldman Sachs, HSBC, Lockheed Martin, and Duke Energy. They're holding an entire week of events, including a Carbon Forum held at Morgan Stanley headquarters and an invitation-only soiree bearing the self-congratulatory title Climate Leadership Awards.

More importantly for those looking to make an impact, Sunday's march is only the most visible event in a rolling series of loosely affiliated actions, talks, parties, and rituals, some of which are likely to be more confrontational.

Starting at 9 a.m. on Monday, the day after the march, former Occupy Wall Street participants are staging actions under the banner Flood Wall Street, promising a “massive sit-in” targeted to “shut down the institutions that are profiting from the climate crisis.”

Naomi Klein, whose new book This Changes Everything builds on the thesis of her 2011 article that reversing climate change is inconceivable without fundamentally challenging global capitalism (a message glaringly absent from the literature surrounding Sunday’s main march), will be among the featured speakers Monday morning. So will Chris Hedges—perhaps an awkward pairing, given recent accusations that Hedges has plagiarized Klein’s work on climate change.

Then, after some training on direct action, Flood Wall Street participants will take some presumably less-than-fully-NYPD-sanctioned actions aimed at the titans of finance funding our collective ongoing effort to find every carbon atom in the ground and pump it into our atmosphere.

“The idea is to highlight the connection between the climate crisis, extractive capitalism, and the financial institutions that are profiting from it,” says Zak Solomon, one of the Flood Wall Street organizers.

The team behind Flood Wall Street isn’t giving much away about the actions they have planned, but it’s a safe bet that they’ll be considerably more radical than the march the day before. Still, organizers of both events are careful to say the divergent tactics are complimentary.

“It’s not either or,” says Winnie Wong, another organizer working on Flood Wall Street. “It’s just a different space. We’re not pointing a finger at what might be wrong with the march strategy—many of the march organizers are working with us and vice versa. We have an incredible opportunity now to organize something in the wake of the official march."

Wong adds, "There’s going to be all this momentum and buzz, all the workshops and education that are part of it, and it’s a great chance to get people on the same page with an issue that is the issue of our time.”

Nick Pinto is a freelance writer living in New York. He has written for Gothamist about a natural gas pipeline being built under the Rockaways, and one of Occupy Wall Street's undercover officers.