What Was that Cloud? 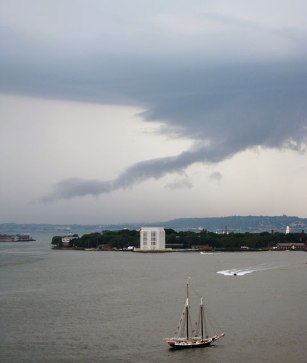 Today has turned out sunny and warm as dry air has finally moved into the city. The dew point plunged by fifteen degrees around noon. That dryness will let today's high approach the upper 80s, and, for the first time in many days, there's no chance of rain! With a warm, dry start tomorrow may heat up to the low 90s. Showers may return as soon as tomorrow night. By Independence Day we'll be back to the warm and humid with a chance of showers pattern. That familiar pattern is likely to last well into next week. Sheesh.

There was a discussion on Brooklynian over whether or not there was a funnel cloud over Brooklyn during Sunday afternoon's storm. A funnel cloud is a rapidly rotating, low-hanging cloud under a thunderstorm. They often, but not always, are a precursor to a tornado. Thunderstorms, however, often produce dust and cloud plumes in their downdrafts in which the wind blows in a straight line rather than rotates.

The photos posted on Brooklynian are inconclusive and there's no mention of rapid rotation in the discussion, so we're inclined to say it wasn't a funnel cloud. Then again, look at the photo taken by Jake. It certainly looks scary! A couple of explanations are likely. The snake thing could be either a scud cloud being sucked into the thunderstorm or cloud debris trailing from the small wall cloud that has descended out of the base of the storm. If anyone has any other photos upload them to Flickr and tag them "gothamist".

#brooklyn
#funnel cloud
#hot
#weather
Do you know the scoop? Comment below or Send us a Tip