What Was in Monserrate's GF's Purse 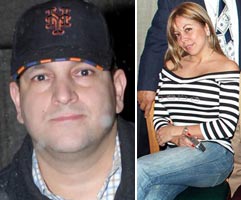 The drama over whether State Senator-elect Hiram Monserrate assaulted his girlfriend continues! Monserrate, arrested after allegedly hitting Karla Giraldo with a broken glass (she had a black eye and a gash requiring 20 stitches), said the incident was a terrible accident; his supporters have reportedly said he was upset about drugs found in Giraldo's purse, hence their fight.

However, sources tell the Daily News and Post that it was the business card of another man (who is in the police union). A source told the News, "He was jealous. It was in her purse. He didn't like her explanations, and it got nasty," while the Post reported, "Sources said her wound is consistent with a jagged piece of glass tearing into her skin."

Giraldo is not cooperating with the police or Queens DA's office on the case—a point that State Senator Eric Adams (who, like Monserrate is a former cop) makes in a statement accusing the NYPD of humiliating Monserrate because he supports police reform. Hmm, the Queens Times-Ledger reports, according to its sources, "Authorities have obtained video surveillance that allegedly shows embattled...Monserrate pulling his girlfriend’s hair outside his apartment early Friday morning just hours before he was charged with assaulting her."