What To Do If You're Sexually Assaulted At A Music Festival 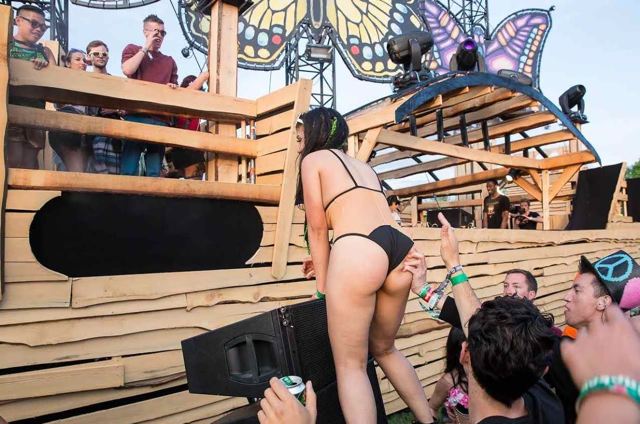 The above photo was snapped a few weeks ago at Mysteryland, a Woodstock-based affair in which neon-clad EDM heads sway to various strains of house music for a whole buzz-filled weekend. But amid lighthearted photos of friends lying on the lawn and posing with a giant stuffed bear, this photo gave us pause. Had we captured a sexual assault?

Our photographer provided us with some context:

show how some women climbed on to the speaker and were dancing, which was fine until a bunch of people started jumping the barricade and dancing in front of the stage, which was still kind of fine until it got too crowded so they ejected everyone. In the process of ushering everyone out, one dude from the audience took the opportunity to spank this woman a couple times, which was followed by a different guy just up and grabbing her. She got down after that.

He added also that she was still dancing as she climbed down, and it did not seem like she knew the man who grabbed her.

Her reaction was simply a mild look of distaste and then climbing down on the opposite side of the speaker than her grabber was on. She didn't say anything. If there were any other reactions they were too mild to notice. Worth noting is that a different guy had spanked her a bit right before the other guy went full grab, and she didn't seem to mind/react to that. But the grabber was too much, it seemed.

Such unsolicited gropings occur at music festivals all the time, often leaving women feeling uncomfortable, annoyed, or blatantly violated (sometimes all three). Confronting your assailant is not only awkward, it's often met with ridicule. Saying nothing perpetuates the idea that such behavior is OK, or is at least tolerated. Let's be clear: it's not, and it shouldn't be.

Min Um-Mandhyan, the Director of Development and Communications for the New York City Alliance Against Sexual Assault, said it's important that men and women alike understand that sexual assault comes in many forms, and it's not always obvious. "Sexual violence is a spectrum, from street harassment to forcible rape," she said.

The 16-year-old girl who awoke under a van after last year's Electric Zoo with her pants undone and bruises and scratches on her legs was a victim of sexual assault in a gruesome and striking manner.

But being groped without your consent during a large, festive event (or at a bar or nightclub, or on the bus or in a deli, or ANYWHERE) is also sexual assault. It's easy to forget because it's so common.

College students, who comprise a large percentage of festival-goers, are particularly susceptible. "It's easy to think 'Oh, I just had a bad night,'" Um-Mandhyan says. "They don't even think of reporting it."

The group recently released a flyer (see below) on how to handle sexual harassment, report an assault, and where to seek medical treatment and support.

Electric Zoo will be back on Randall's Island at the end of August, despite 31 arrests being made last year and two drug overdose fatalities. Organizers told us in a statement that they will "vigorously investigate any incident in which one of our fans feels he or she was inappropriately touched." Neither Mysteryland nor Governors Ball responded to repeated requests for comment.

Additionally, new agreements with the city mandate that Electric Zoo have "roamers"—ideally, one roamer for every 500 attendees—scouring the area in search of partiers who appear dangerously drunk or high. The festival's organizers were also required to bulk up their insurance coverage this year, DNAinfo reports.

But what to do in an instance that seems like a gray area? LA Weekly addressed the issue of Dance Floor Boners last year: "At some point the dude makes his move and puts his hands on your hips. In no way did your body language suggest that you wanted him to do this, although it's possible that he's mistaken your enthusiastic shuffling for an open invitation to touch you. (Not the same thing!)"

The article suggests making eye contact and firmly asserting that your personal space is being invaded, which will usually result in the space invader walking away. It's awkward, yes, but it's also infinitely better than having your good time compromised.

Four years before the murders, I was sitting in a bar in Washington, D.C. with a male friend. Another young woman was alone at the bar when an older man scooted next to her. He was aggressive, wasted, and sitting too close, but she smiled curtly at his ramblings and laughed softly at his jokes as she patiently downed her drink. “Why is she humoring him?” my friend asked me. “You would never do that.” I was too embarrassed to say: “Because he looks scary” and “I do it all the time.”'

We all do. Last week, I was seeing a show at Bowery Ballroom. I had the good fortune of being pretty close to the stage, but it was a rowdy show and fights were breaking out. At one point, a man sidled up behind me and, using the nearby swinging fists as a segue, leaned over and said "Don't worry, I'll protect you," while pressing his erect penis into my back. It was too crowded to flee, and the pervert knew it. I made a disgusted face and shoved my way back to my friends. This type of incident is so common, so utterly routine, that I'd all but forgotten about it by the next song.

It's a situation that Gwen Washington, founder of the non-profit Leila Grace Foundation, which provides prevention programs on college campuses and last year had a presence at Pitchfork Music Festival in Chicago, understands well. Still, she advises women (or men) to address the situation immediately if they feel they have been violated, while the memory is still fresh. "You paid money to be there," she said. "Nobody deserves to feel uncomfortable and violated."

And to the idiots who will invariably suggest the woman in the photo above was asking for it, Washington sighs; she's heard this before, too.

"Sometimes people will say, 'Oh it's not that bad, what were you wearing, you shouldn't drink so much,'" she said. "When I was raped a long time ago, in college, I was wearing a knee long skirt and a turtleneck, and it was summer," Washington added. "It's not a question of 'Oh, if she hadn't been wearing that, that wouldn't have happened—the question is, why did that man feel it was OK to attack her?"