What Time Does The Stupid Bowl End?

Professional sports is the Under Armoured opiate of the masses, and never have its phantasmagoric powers been more on display in New York than during this week, as the mass-marketing eyesore that is Super Bowl XLVIII takes over our lives and minds and streets and subways. When will it end? Judging by our best guesstimate from last year, we've got at least until 10:15 p.m. on Sunday until New York City shakes itself free from this provincial stupor. The worst is yet to come.

Parasitic capitalism, the kind that feeds off the double-chinned smiles of mediocrity—the kind millions of us forsook to writhe noisily and happily on this tiny rock—exists in New York because we allow it to exist. It may be stamped on our bikeshare system and on our $5 footlongs, but this is an uneasy détente.

If you want a post-game foam party in the Meatpacking district on a typical night in NYC, fine. Or you can simply spend the evening at Brecht Forum arguing the fine points of Anarcho-syndicalism—just another Sunday.

But now the Super Bowl is all up in your face at every turn. Look no further than Bryant Park, which has been transformed into a synergistic PepsiCo-branded brothel, where big name chefs have accepted big paychecks to serve up such delicacies as Mountain Dew Bacon Tacos and Doritos Cured Gravalax. It's #PepCity, where a Pretty Public Park Is Purloined for Pestilent Product Placement! Sports and consumerism and bread and circuses—common sense says it's by design.

But Bryant Park Corporation spokesman Joe Carella has polished his talking points well. "Any event that a corporation or other entity sponsors in Bryant Park has to be fully open to the public, and that is one reason why the [Bryant Park] Corporation lobbied to have the fashion shows leave," Carella insists. "There was too much space occupied and no relevance to the public at large. Secondly, Bryant Park doesn't get a dime of city money anymore. All this money that is raised through sponsorship gets pumped back into the park...You wouldn't have the park you have today without that greater budget."

Fine, why not just rename the park Xtreme Mountain Dew FunMeadow and be done with it? Fill the fountain with a different flavor of carbonated corn syrup-based beverages every day for MAXIMUM EXTREME PROFIT and run a zip-line into it straight from the roof of the New York Public Library, or whatever that boring old building is. Get Lenny Kravitz to play a free concert, and if you can't get Kravitz, get Bob Marley's son. Oh, they actually did get Bob Marley's son. "PepsiCo presents Ziggy Marley" is Saturday night at 7:45.

"Obviously this type of commercial event has zero to do with a park purpose and is unfortunately one of many inappropriate park uses that the Bryant Park Corporation has been able to get away in exchange for a large fee," ardent parks advocate Geoffrey Croft tells us. "Revenue that, incidentally, is being allowed to be diverted from the City's general fund to the well-heeled group at the expense of other city services including public parks." 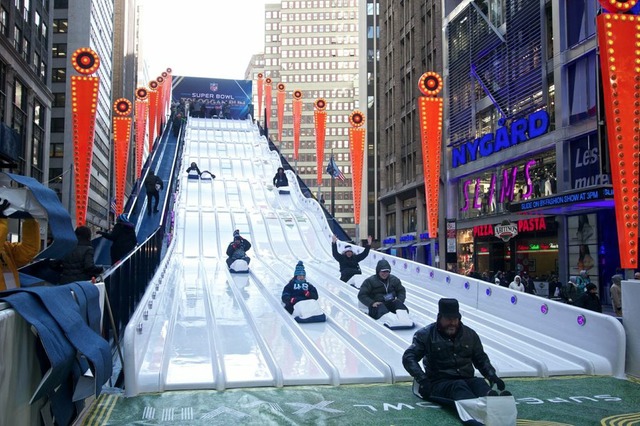 Meanwhile, Times Square, which was once a serene, commercial-free oasis of contemplation and reflection, has also been blighted with Super Bowl cross-promotional branding. Broadway from Herald Square to 47th Street is now "Super Bowl Boulevard Engineered By GMC," and features all sorts of "free interactive fan celebration" activities, such as a very special performance by castmembers from Rock of Ages, the musical that's right around the freaking corner, and a rebranded, underwhelming version of those potato sack slides you see at every county fair across America everywhere.

That stupid toboggan ride epitomizes everything that's soul-sucking about this whole relentless Super Bowl GMC PepsiCo Hell Week. We were promised a towering sledding slope befitting the aspirations of a vibrant cosmopolis. Instead we got the same provincial diversion that even kids in Shelbyville outgrow by the time they're 12. If there is a God, those sleds have bedbugs.

The most despicable thing about the Super Bowl—besides our nation's willingness to simply ignore football's devastating impact on players' bodies and brains—is its harnessing of creativity for crass commercialism. Which multi-million dollar sports corporation will prevail between commercials on Sunday? Everyone instinctively knows the outcome of the game is irrelevant; the real winners have already spiked the ball in our face. Go Xbox One! Do you think that Lexus SUV with the "I'm 48 Years Old & Can't Parallel Park In-Dash Oopsie Camera" will liberate you from the bonds of Samsara?

"Shut up," the intelligent sports apologists say. "Millions of people don't watch the Super Bowl. Apathy is not edgy. We don't care that you don't care."

Fuck you. This is New York. We don't care that you don't care that we don't care. The Super Bowl isn't even in New York City, but somehow we have to bear the brunt of the mass-marketing consumerist corporate vampires that have been steadily phlebotomizing our city's unique lifeblood for years.

If you don't want to spend this Sunday being trained by the Ruling Class to view the world as a passive spectator on the sidelines, here are some alternative Super Bowl activities for your consideration. And if you want to feel extra-superior to the jocks who may or may not have called you the Stay-Puft Marshmallow Man in junior high, we suggest more edifying activities:

#nfl
#phantasmagoria
#sports
#super bowl
#trolling josh steele
#original
Do you know the scoop? Comment below or Send us a Tip