What The Heck Was Hanging In Front Of Teddy's In Brooklyn?

Pardon Me For Asking received the below pictures of an unidentified carcass-looking object hanging on a gate in front of Teddy's, the woman's boutique store on Court Street in Cobble Hill. "At first I thought it was a piece of meat or an octopus, but when I looked more closely, all I could think was that it was some sort of internal organ. It was about the size of a woman's shoe, yellow and red, and slimy looking," their tipster wrote. The NSFW photo is below. 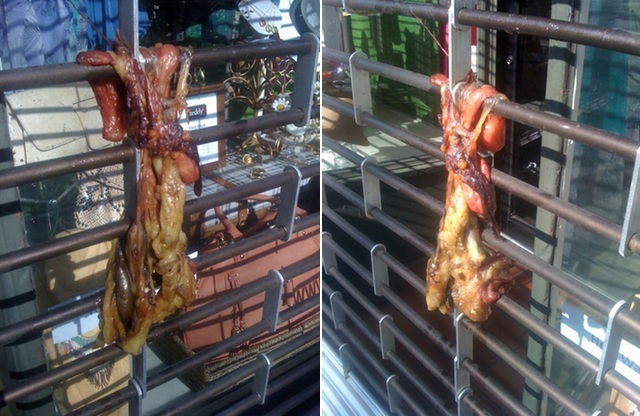 via Pardon Me For Asking

The tipster added: "It looked as though someone had purposely put it there right at eye level. I stood there for a few minutes hoping someone would pass by who I could talk to about it, but nobody was around at the moment. I can't stop thinking about it! It's hideous looking." The carcass, which looked like it could be a squirrel to some of us, has since been removed.

So was it an animal? Was it some sort of Santeria-related ritual killing? Was it an incredibly disturbing prank? Could it have been an extortion sign? We called Teddy's to ask, and an employee told us: "I don't think that's something that really needs to be discussed."

#animal
#brooklyn
#Court Street
#ew
#guts
#NSFW
#teddy's
Do you know the scoop? Comment below or Send us a Tip