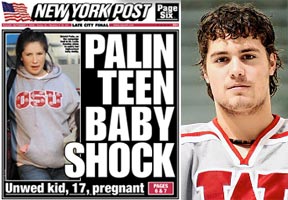 The Republican party may be trying to make the best of their Gustav-affected convention, but the news that vice presidential candidate Sarah Palin's 17-year-old daughter is pregnant has thrown a lot of attention onto things other than why John McCain should be president.

The NY Times says that the disclosure of Bristol Palin's pregnancy is "one of several revelations that called into question how well John McCain had screened her" (the others being her Troopergate incident, her husband's DWI decades ago, and her membership in Alaska's independence party). Some feel that the pregnancy will resonate with Americans who have had to deal with similar situations, while others question Palin's opposition to "programs that teach teenagers anything about contraception."

The McCain camp suggested the announcement was made because of liberal blog's gossiping--and even that Barack Obama's campaign was behind it. Obama said:

I’ve heard some of the news on this, and so let me be as clear as possible. I have said before and I will repeat again: I think people’s families are off limits. And people’s children are especially off limits. This shouldn’t be part of our politics. It has no relevance to Governor Palin’s performance as a governor or her potential performance as a vice president. And so I would strongly urge people to back off of these kinds of stories.

You know, my mother had me when she was 18. And so how family deals with issues and, you know, teenage children, that shouldn’t be the topic of our politics. And I hope that anybody who’s supporting me understands that’s off limits.

As for Bristol Palin, the father was revealed to be Levi Johnston, an 18-year-old ice hockey player at her high school. The Daily News describes the pregnancy as an "open secret," and his coach said, "He was a good kid to be around, with lots of friends. He was well-liked." The media flocked to Johnston's MySpace page (which was taken down), where he called himself a "f-----' redneck" and someone who doesn't want to have kids. The Daily Intel thinks Johnston is "sex on skates," a hot "baby daddy," and "basically the quintessential example of that guy who you are constantly worried is going to impregnate your daughter (and occasionally does)."

#abstinence
#barack obama
#Bristol Palin
#john mccain
#Levi Johnston
#premarital sex
#sarah palin
#VP vetting
Do you know the scoop? Comment below or Send us a Tip
A new Gothamist is coming! We’ve moved comments over to our beta site. Click here to join the conversation and get a preview of our new website.