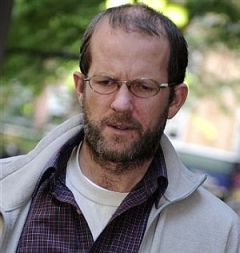 Earlier this week, a judge decided that a man found guilty of stalking actress Uma Thurman did not deserve jail time. Instead, Jack Jordan was sentenced to psychiatric counseling and three years probation in Maryland. However, Jordan was spotted in Lower Manhattan yesterday.

The Daily News and Post spotted Jordan sitting, per the News, "silently in a lower Manhattan park across the street from the courthouse where he was sentenced." Jordan isn't barred on NYC--he just needs permission to leave Maryland from his probation officer. A NY State probation spokesperson told the News, "We're looking for him now, and if we find him we're telling him he has to leave...He shouldn't be in New York."

Well, clearly, there's a lot of confusion, since Jordan's attorney disagrees, saying his client could have been trying to retrieve some of his property from the cops, "He hasn't been given any orders to stay away from New York or not travel."

Given that Jordan sent Thurman disturbing cards, called her family, and even camped out in a car across from her home, some law enforcement officials are unhappy with the sentence. A police source told the News, "Anyone who has ever spoken to this guy knew that probation was a mistake...He is flatout crazy, and once he goes off his meds - and he will - he'll be right back stalking her. He can't help himself."

Photograph of Jordan by Louis Lanzano/AP