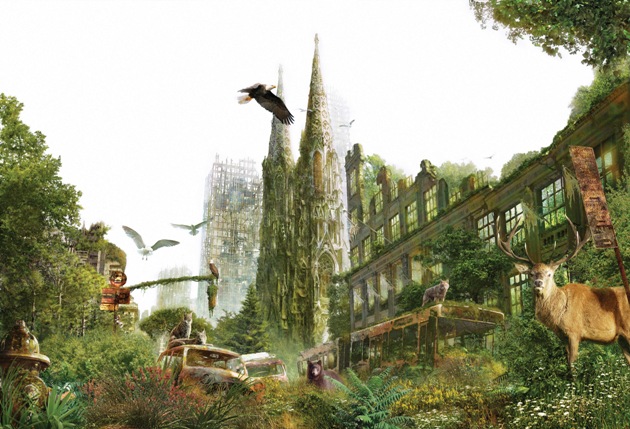 Scientific American has an fascinating feature An Earth Without People, not to mention these renderings of what the city might look like sans humans. The drawing above is what Fifth Avenue/St. Patrick's Cathedral would look like and the drawing below is what the subways would look like after just two days.

SA interviewed Alan Weisman, whose book The World Without Us discusses would happen if people just vanished completely from the face of the Earth. Given that subway system pumps about 13 million gallons of water out of its underground infrastructure each day, humans do a lot to keep our necessities going. But without them:

There are places in Manhattan where they’re constantly fighting rising underground rivers that are corroding the tracks. You stand in these pump rooms, and you see an enormous amount of water gushing in. And down there in a little box are these pumps, pumping it away. So, say human beings disappeared tomorrow. One of the first things that would happen is that the power would go off. A lot of our power comes out of nuclear or coal-fired plants that have automatic fail-safe switches to make sure that they don’t go out of control if no humans are monitoring their systems. Once the power goes off, the pumps stop working. Once the pumps stop working, the subways start filling with water. Within 48 hours you’re going to have a lot of flooding in New York City. Some of this would be visible on the surface. You might have some sewers overflowing. Those sewers would very quickly become clogged with debris—in the beginning the innumerable plastic bags that are blowing around the city and later, if nobody is trimming the hedges in the parks, you’re going to have leaf litter clogging up the sewers.

Scientific American also has a timeline of what could happen - streets cave in after two years, buildings start to crumble in four, fires in five years, bridges collapse in 300 years. This really calls for some stop-action animation. Update: It turns out there is some animation - check out this video from Scientific American (and how vegetation starts to grow over Rockefeller Center!). 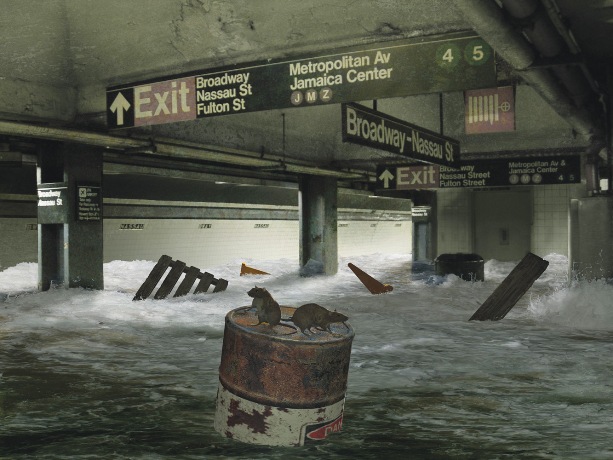