What Is Happening To Rivington House?

Rivington House represents one of Mayor Bill de Blasio's biggest black eyes. A year ago, de Blasio admitted to Lower East Side residents that his administration's role in turning the nursing home for New Yorkers with HIV/AIDS into luxury condos was "ridiculous" and a "mistake," and while he said there was no legal path to reverse the sale, he promised to schedule a public meeting between the community and the property's developers.

That meeting has yet to materialize, and the owner of Rivington House, Slate Property Group, has yet to convert the property for residential use. A DOB spokesperson said Slate's application is still under review, and the building has a partial stop work order.

Last night, dozens of protesters, including members of Neighbors To Save Rivington House, vowed to do everything they could to stop the property conversion, and circled the six-story, 119-year-old building at 45 Rivington Street with caution tape that read, "Gentrification In Progress."

"This place really should stay," Richard Rosenberg, a Rivington House resident from 2004 to 2014, told the crowd. "Clean it up, wash it up, and get back all the people who are scattered over the five boroughs and bring them back here."

"We are trying to, at the very least, get a significant portion of the property at Rivington House for community use," Smith-Leonard said. "The community's not going away, they're not going to give up."

A representative for Slate did not return our request for comment.

"Our first request is to return the whole building, but we definitely want to see something returned to the community," said K Webster, one of the leaders of Neighbors To Save Rivington House.

Webster said she was "beyond puzzled" at the silence from the de Blasio administration on Rivington House.

"From the very beginning we have asked the mayor to not only join us, but lead this charge," Webster said. "If someone had tried and failed, at least we'd think we have a mayor who cares about a 'tale of two cities.'"

A spokesperson for the Mayor's Office did not immediately return a request for comment. 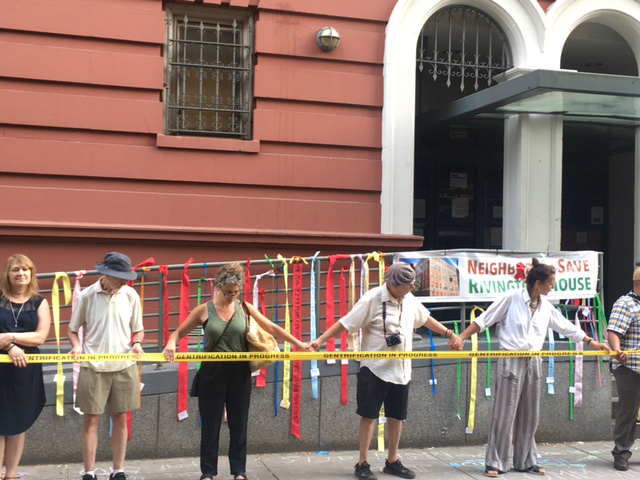 In 2014, Rivington House, which had 219 beds, shut down as demand for in-patient HIV/AIDS treatment waned. The next February, Village Care, the non-profit running the facility, sold the property to Allure Group for $28 million. In November 2015, Allure paid the city $16 million to lift the deed restrictions that required that Rivington House remain a non-profit healthcare facility, with the expectation that the site would be converted into a for-profit nursing home. But in February 2016, with the deed restrictions lifted, Allure sold the property for $116 million to Slate.

The City's Department of Investigation later issued a report detailing the "complete lack of accountability within City government" regarding the lifting of the deed restrictions. The City Council excoriated First Deputy Mayor Tony Shorris, who oversaw the transaction and blamed Allure for being "duplicitous." The New York Attorney General's Office reached a settlement with Allure, requiring them to pay $1.25 million to local nonprofits and open new nursing homes in the Lower East Side and in Brooklyn, and Slate was all but forced to back out of the lucrative Bedford Armory development project.

This past March, Chin and Brewer wrote a letter to Deputy Mayor Alicia Glen, asking her to block Slate's attempts to convert the building for residential use until after the public meeting, and until "a transparent process is established to address the future of the site and the provision of long-term care for seniors in the neighborhood."

Earlier this year, plans to put a healthcare facility for seniors on Pike Street were scrapped in favor of 88 units of affordable housing for seniors on Norfolk Street.

Rosenberg, who is 71—"I wasn't supposed to make it past 48," he said—described the "really great experience" he had while receiving care at Rivington House, recalling his daily walks to the post office, and how students from the Julliard School would come to perform for patients.

"I just loved the neighborhood. It's the people...Everybody was on a first-name basis, even the administrators," Rosenberg said. "It was a place to live—Rivington House! We need this place back."