What Is Fusion Voting And Why Is Cuomo Allegedly Trying To Kill It?

The party, now chaired by Cuomo ally Jay Jacobs, passed a resolution to end the practice of fusion voting, which allows candidates to run on multiple ballot lines at once. Though largely symbolic—any change would have to go through the Democrat-controlled legislature, where there is little appetite to overturn fusion—the resolution is aimed at potentially kneecapping New York’s most prominent third party, the Working Families Party, WFP’s leadership contends.

The WFP, a coalition of progressive activists and some labor unions, says Cuomo wants to punish it for endorsing Cynthia Nixon for governor last year and successfully backing six State Senate candidates who defeated members of the now-defunct Independent Democratic Conference, a breakaway faction of Democrats that existed with Cuomo’s tacit blessing.

“This is about Cuomo and the Democratic establishment exacting revenge against the progressives who defeated the IDC and fought for a Democratic State Senate,” said Joe Dinkin, the national campaigns and communication director for WFP. “It’s about maintaining control in Albany that is threatened by growing progressive power that Cuomo cannot control.”

The Cuomo administration has flatly denied the governor is behind the push, and maintains the governor has no position on fusion voting. “I know they were humiliated in last year's governor's race, but that's no excuse to ‎run around spreading lies and ranting about conspiracies. It's both sad and a bad look,” said Cuomo spokesperson Rich Azzopardi.

In the meantime, WFP has successfully rallied progressive and institutional Democrats to its cause. Much of New York’s congressional delegation, including Senators Chuck Schumer, Kirsten Gillibrand, and Rep. Alexandria Ocasio-Cortez, affirmed their support for fusion voting, as well as Senators Bernie Sanders and Elizabeth Warren, two presidential contenders.

If Cuomo is indeed behind the call to end fusion voting, it may be more like kicking sand in the eyes of WFP than actually dealing any kind of deathblow. Democrats in the State Senate, many of them elected with WFP’s help, are not going to outlaw fusion voting. On that front, the argument is moot.

But it has raised questions about a system that only exists in New York and a handful of other states, one that progressives are now defending with vigor, even as it also props up the Conservative Party, an organization founded to pull Republicans to the right, and the Independence Party, a dubious vessel that usually rents its line to Republican candidates and, perhaps most strangely, is chiefly made up of people accidentally registered to the party.

How exactly would eliminating fusion voting hurt WFP and other third parties? Losing the ability to cross-endorse would, at the minimum, be a severe loss of prestige for WFP. It would retain a ballot line but could no longer give it to Democrats, perhaps creating scenarios where WFP candidates split votes with Democrats.

It is exceedingly rare for the WFP to run a candidate solely on their ballot line. Party leaders typically come to together to pick a Democrat and offer support through the WFP’s consulting service, fundraising, canvassers, and the ground troops supplied by participating unions.

“One of the most compelling reasons to keep fusion voting is that it avoids vote splitting,” said Alex Camarda, a senior policy adviser at Reinvent Albany, a good government group neutral on the fusion question. “When third parties runs their own candidates, you can have someone who is ideologically opposite win a race.”

Without the power to endorse Democrats, a time could come when most mainstream Democratic politicians stop meeting with WFP or taking their demands seriously, as they do now. (The WFP has fought for a variety of progressive causes, including a $15 minimum wage.) Every four years, the WFP, like all political parties, must win 50,000 votes statewide to keep their ballot line. They have done this in recent years by reluctantly endorsing Cuomo, the Democrat. Without fusion, they would have to run their own candidate to reach the threshold, a more difficult task.

Under current election law, political party accounts can make unlimited cash transfers to their endorsed candidates. If WFP cannot endorse Democrats, it would become harder to coordinate with them. Donors may also see less of a reason to contribute. (WFP, it’s worth noting, is active in states that do not have fusion voting, doing a bulk of the work they do without the ability to give a ballot line to Democratic candidates.)

“We’d be barred from supporting the candidates we want to support. It makes no sense,” Dinkin said of New York. “We see an attack on fusion as a direct structural attack on the power of the progressive movement.” 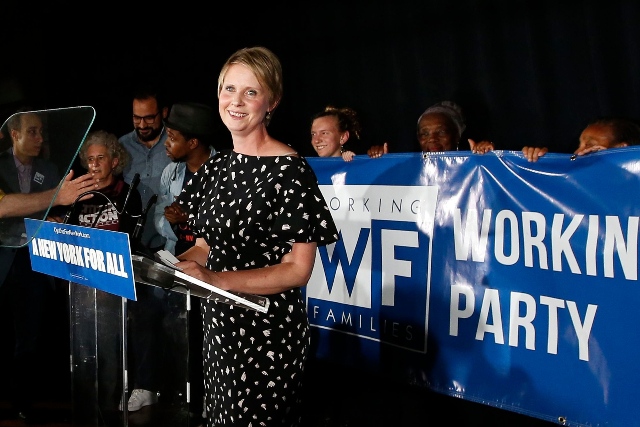 Jacobs, the chair of the State Democrats, who also chairs the Nassau County Democratic Party, said in an interview he believed fusion voting should be ended so the Conservative and Independence parties would lose the power to cross-endorse candidates, especially the Republicans on Long Island, where both third parties have quietly held sway.

When pressed on whether he had discussed fusion voting with Cuomo, Jacobs said it was “quite a while ago,” though he wouldn’t deny it was this year. Jacobs maintained, however, he never talked to the governor about the State Party’s particular resolution.

“Number one, fusion voting is one of the larger corrupting influences in politics today. You have transactional parties like the Independence Party that trade jobs and benefits for their ballot line,” Jacobs said. “Number two, it’s confusing to the public. Here you have parties that are supposed to represent unique, different philosophies. You can have a candidate who gets the Working Families, Democratic, Conservative, and Independence Party lines. How does that not confuse voters?”

Jacobs was adamant that fusion voting has cost Democrats elections, particularly in Nassau and Suffolk counties. “Democrat versus Republican, we win. That’s the facts.”

First, a brief history of fusion voting: Through the 19th century, most states allowed candidates to run on multiple party lines at once. Democrats and Republicans in many states began to fight back against the practice as third parties, especially those on the left, gained sway. Only eight states today, including New York, allow fusion voting.

If fusion were ever removed, legal hurdles could be presented. In 1911, the Court of Appeals struck down an attempt to legislate away fusion in New York and it’s been with us ever since. The only change came with the Wilson-Pakula Act of 1947, which forced candidates to seek permission from parties before running on their lines unless the candidates were already enrolled members.

Wilson-Pakula was aimed squarely at a popular leftist East Harlem congressman named Vito Marcantonio, who had won on the Republican line but identified as a member of the American Labor Party, a left-wing organization accused at the time of being a socialist and communist front.

While fusion, in that sense, should be a cause championed by progressives today, it has also empowered conservative forces in the state. Once pro-labor and populist, the Liberal Party evolved into a pay-to-play operation that most infamously collected patronage from Republican Rudy Giuliani after endorsing him for mayor.

Fusion allowed Michael Bloomberg to effectively buy the Republican and Independence lines to run for mayor and win three times. And the Conservative Party, founded in 1962 to combat liberal Republicans in New York, has used its leverage, through the extra votes its line has lended, to keep most GOP candidates from embracing fiscally and socially progressive positions.

What’s less clear is how many of these Conservative Party votes wouldn’t just be folded into Republicans votes were the party unable to cross-endorse Republican candidates. The ideologies of the GOP and Conservative parties are far less distinct than they used to be; members of both parties largely support Donald Trump, bristle at higher taxes, and criticize benefits for undocumented immigrants. As the liberal wing of the party dies off, it’s possible Republican candidates for office would just absorb the old Conservative votes in a world without fusion.

Jacobs might have a stronger point on patronage and corruption: both the Conservative and Independence parties, particularly in Suffolk County, have been embroiled in scandal. One Conservative Party leader received a $65,000 a year patronage gig after he helped cut a deal with the local Independence and Democratic parties to back a judicial candidate. This isn’t uncommon: in trades for votes, the local Democratic and Conservative parties often work in tandem, confusing voters. A previous Suffolk Conservative Party chair, Ed Walsh, was sentenced to two years in prison for pocketing hundreds of thousands of dollars from the Suffolk sheriff’s department while golfing, gambling and politicking on county time.

Jacobs's objection to fusion voting is also not new. In 2014, he publicly criticized Cuomo for taking the backing of the Independence Party, which Cuomo would do again in 2018. Frank MacKay, a former nightclub owner and record producer, has led the Suffolk County Independence Party as well as the statewide organization, where he has played a kingmaker role in local judicial races.

There is also some irony to the WFP’s claim that ending fusion would be Cuomo’s way of payback for their efforts to defeat the IDC: it was the Independence Party which allowed the IDC to control their party account to spend on behalf of endangered incumbents. The arrangement immediately drew legal scrutiny and led the state’s top elections’ enforcer to seek $8.6 million in penalties and fines from senators, campaign staff, and party officials connected to the fundraising partnership.

As long as prominent Democrats speak up for fusion voting, however, it won’t be going anywhere. And progressives are happy, despite the occasional bad headline, to make it a cause.

Ross Barkan is a political journalist who recently tried his hand at politics: last year he lost the Democratic primary for State Senate in Bay Ridge, Brooklyn. Read more about his run here.