What Happens When You Try To Get The MTA To Refund $2.75 For A Bad MetroCard?

We've tangled with Time Warner ("If that fee isn't for the Internet then what's it for? Huh? WHAT'S IT FOR?"), and have argued with UPS about how many "Brooklyns" there are in New York (one, to our knowledge). This is all to say that we are fiercely, proudly, hopelessly cheap. We weren't expecting much when we mailed in our busted $2.75 MetroCard in April and asked for a refund. But four months later we now know that the MTA will need our request for 11 quarters in writing.

In February, we put $2.25 on a .50 MetroCard (most of our wealth is tied up in trusts and inheritances) and attempted to swipe through, but the machine told us to "see agent." That Union Square agent told us that the card was broken, and that we'd have to mail it in, along with a request for a refund. We used a different MetroCard to swipe ourselves through and forgot about it.

Fast forward to a desperate day in April when, during an exhaustive search for currency to purchase an adult beverage, we stumbled upon the card and the MTA-provided envelope. We wrote out a note explaining the problem, licked the adhesive, and waited for our $2.75 MetroCard.

Last week we received this reply, which was enclosed with a .50 MetroCard. 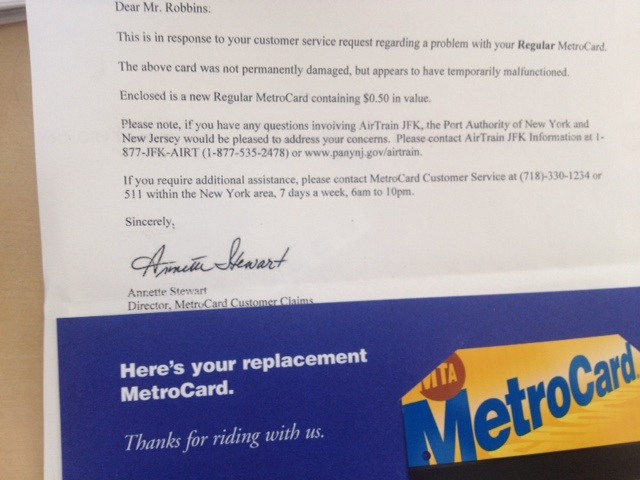 Unwilling to part with our $2.25, we picked up the phone and reached an exceedingly polite MTA customer service representative, "Mister Henry." Mr. Henry first informed us that there was a "backlog of several weeks" in responding to broken MetroCard inquires (23, to be exact). He then gave us the long, sordid history of our old MetroCard ("On February 2nd you added $5 to the card, on February 8th you added $2 to the card, on…") before concluding that on February 29 at 12:30 p.m., we added $2.25 to a .50 MetroCard, and were receiving a .50 card because The Man assumed that the station agent had buzzed us into the station (as far as we could tell) thus taking the $2.25 off of the total value of the card.

We assured Mr. Henry that this was not the case. He graciously deferred to our memory and told us, "You're gonna have to respond in writing to them about that." And so we shall. But questions remain: why can't station agents just void the broken card and issue a new one? How many people ask for amounts that are a single fare or less? Are we just being cheap assholes about this? We've reached out to the MTA but in the meantime, feel free to unload your tales of woe in the comments.