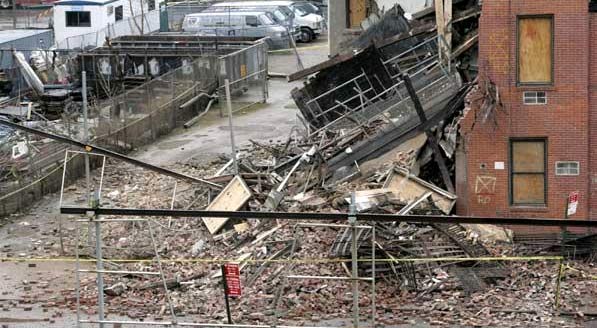 The Department of Buildings commissioner admitted her agency knew a Harlem building was in danger of collapse but somehow it got lost in the shuffle and collapsed on its own. On Tuesday, bricks fell off 102 East 124th Street, a vacant building, and a few hours later, the roof and top floor collapsed. Its neighboring building was compromised and authorities moved to demolish it, asking the MTA to suspend all train activity near by in fear the trains' vibrations would cause more problems.

In other words, the DOB and HPD are really lucky no one was injured.

Here's the DOB's record of complaints for the building. Lancaster also said "something changed structurally in the building" since the DOB's last visit, for the building to worsen so much. Kushner Companies, the owner of the two buildings, says it had asked the DOB for a permit to demolish the buildings earlier this week.