What Fat Albert Has To Do With JT Leroy 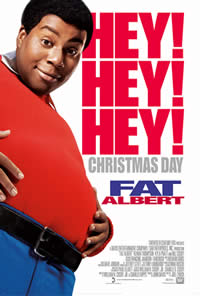 A Bill Cosby cartoon, Adidas sneakers and even mayor Ed Koch figured into the trial of Laura Albert, aka the author who created the literary sensation JT Leroy. Albert is being sued by a film production company; Antidote Films paid JT Leroy $45,000 for one of his novels, but now the company says that the contract is void because JT Leroy doesn't exist. Last week, Albert's mother gave wrenching testimony that mentioned hospitalizing her daughter for depression at young ages but it was nothing compared to Albert's own testimony yesterday.

Albert revealed she had been sexually abused by a family friend and had run away from home a number of times. When she was sent to a group home, she and other patients "used to joke that Ed Koch was our father." And she had been teased by classmates who would call her "Fat Albert" because she was heavy. The Times reported she went "far as to sing for them the television show’s key line: 'Hey, hey, hey, Fat Albert!'" and said "I didn’t want my name."

Albert says she developed various personalities, and wrote as one of them, Jeremy which evolved into JT Leroy. From the Post:

Albert said the public attention forced her to address the dilemma of how to handle requests for photos and book readings by JT LeRoy - who was meanwhile waging a mini-war against his physical host.

The Washington Post's David Segal has other interesting details, if you've been curious about the case: Apparently Antidote has been trying to buy the rights to Albert's life story, "which the company had sought in the hopes of making an 'Adaptation'-style movie about the fabrication of LeRoy and its fallout" but she has refused. And the Adidas: Segal explains there are a pair of "Adidas wrestling sneakers, which she straps on every day when the trial adjourns."