Earlier this year, Mayor Bill de Blasio announced a one-year pilot program to bring four supervised injection sites to New York City. The facilities—in which heroin users can shoot up with clean supplies—had long been pushed for by harm reduction advocates and drug policy experts, who note that the strategy has reduced overdose rates and disease transmission when implemented in other countries. Following a year in which 1,487 New Yorkers suffered fatal drug overdoses, the mayor's announcement was hailed as a major victory in the fight against the city's increasingly deadly opioid epidemic.

But more than six months later, progress on the injection sites seems to have stalled. The culprit for the delay, according to advocates, is Governor Andrew Cuomo and the State Department of Health, which has not yet signed off on the pilot. Neither the Governor's Office nor the DOH responded to inquiries about the holdup. But Marcy Miranda, a spokesperson for the Mayor's Office, told Gothamist: "We are ready to work with providers to move forward as soon as the State gives approval."

On Monday, in an effort to nudge the state toward supporting the pilot, activists with VOCAL-NY erected a pop-up safe injection room in front of the governor's midtown office—a tactic once deployed against de Blasio prior to his endorsement of the sites. This time around, the demonstrators were joined by artist and photographer Nan Goldin, who founded the group P.A.I.N Sackler to hold the Sackler family and Purdue Pharma responsible for their central role in the epidemic.

We took this model safe consumption site all over the state, to cities big and small, to talk to people about saving lives. Everyone wants to save lives. #endoverdoseny @NYGovCuomo pic.twitter.com/QdUtPyydSO

In a statement, Goldin accused Cuomo of intentionally blocking the life-saving public health solution, even after signaling his support during a gubernatorial debate earlier this year. "We consider this the most effective method to immediately save lives within the communities hardest hit," she said. "We demand the Governor live up to his word and make this real. The time is now. We cannot wait."

Activists with VOCAL-NY also blamed the governor for not caring about the black neighborhoods impacted by the opioid crisis, and accused him of backing a law enforcement approach that they say disproportionately criminalizes nonwhite users. Last year, overdose rates among black New Yorkers surpassed rates among whites and Latinos for the first time in a decade, due in large part to growing fentanyl usage. "It’s about healthcare," the group said. "This is not a police issue!"

We need to call a spade a spade—y’all have never responded to the opioid crisis in black neighborhoods, @NYGovCuomo. You locked us up. It’s time to step it up for real! #endoverdoseny pic.twitter.com/Glyq3IXUx3

The proposed sites in New York City would be located at existing needle exchange facilities in Washington Heights, Midtown West, Longwood, and Park Slope. In addition to the State Department of Health, the facilities will need the approval of the district attorneys in each borough, the relevant city councilmembers, and a community advisory board.

Even if the injection sites get the green light from city and state authorities, some legal observers warn that they could face federal legal challenges under the so-called crack house statute, which makes it illegal to knowingly operate a location for the purpose of manufacturing, distributing, or using a controlled substance.

Advocates, meanwhile, point to needle exchange programs—which were once criminalized and are now widely seen as a public health solution—as a precedent for defying federal law. According to a letter sent by Deputy Mayor Herminia Palacio to State Health Commissioner Howard Zucker earlier this year, the state should be permitted to at least authorize the facilities, since they're part of a "research study." At that point, enforcement would fall to President Trump's Justice Department.

While the DOJ has warned that they won't tolerate the safe injection sites, advocates are urging the state to push forward anyway, and say they can deal with federal pushback later.

"It doesn't make sense that we're beholden to a federal statute, when there are ways to navigate around it, while our governor continues to say he's going to stand up to Trump by any means necessary," Jasmine Budnella, Drug Policy Coordinator at VOCAL-NY, told Gothamist. "The issue for us is that there are literally people dying while we wait for this."

UPDATE: After this story was published, a spokesperson for Governor Cuomo, Hazel Crampton-Hays, issued the following statement to Gothamist:

“Governor Cuomo has long championed a multi-faceted response to the opioid crisis with a focus on prevention, harm reduction, treatment, recovery and law enforcement and we remain committed to exploring every option to reduce opioid deaths. We are actively working with stakeholders and the City on their proposal while addressing potential law enforcement concerns and the threat of legal challenges. Above all, our chief concern is protecting the lives of New Yorkers.”

On Tuesday, VOCAL-NY, in collaboration with Housing Works and Drug Policy Alliance, unveiled a series of billboards in Times Square featuring Cuomo's face next to a real-time counter showing overdose rates in New York. "Tell Governor Cuomo to take action now on overdose prevention centers," one read, while another asked: "How many deaths will it take?" 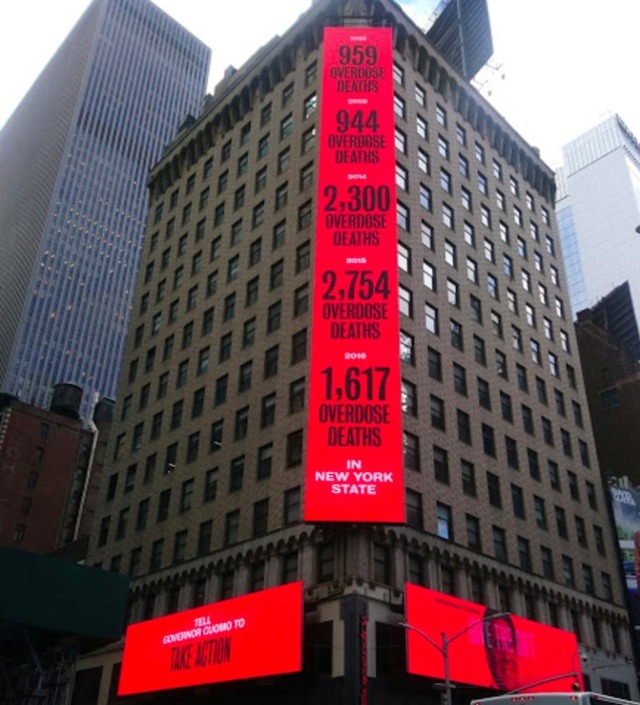 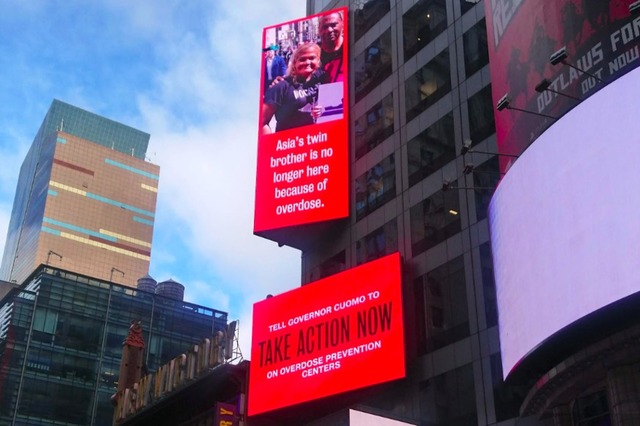