What Does "Affordable Housing" Really Mean In De Blasio's New York? We're About To Find Out

Deputy Mayor Alicia Glen had just begun testifying at a City Council zoning subcommittee hearing yesterday morning when a barrage of catcalls erupted. “De Blasio’s plan ain’t affordable to me!” the hecklers shouted, and about a dozen were ejected from the Council chambers.

The hearing marked the beginning of the 50 days the Council has to vote on Mayor Bill de Blasio’s “mandatory inclusionary housing” program. When several city neighborhoods are rezoned, the plan would allow for developers to build taller buildings and require them to rent 25% to 30% of the apartments for less than market rate.

Seven neighborhoods are being considered: East New York in Brooklyn, the Jerome Avenue region of the Bronx, Bay Street near the ferry in Staten Island, Inwood and East Harlem in Manhattan, and Flushing West and Long Island City in Queens.

The Council would have three options for these neighborhoods. In one, they would require 25% of the apartments to rent for an average of about $1,165 a month, affordable to people making 60% of the metropolitan area’s median income (AMI)—which amounts to $36,300 for an individual and $51,780 for a family of four.

In the second, 30% would rent for an average of $1,550, for people making 80% of AMI, about $62,000 for a family of three. The third would be available in “emerging markets”—a.k.a. gentrifying neighborhoods outside the southern half of Manhattan—and would slate 30% for households at 120% of AMI. These would rent for about $2,300.

This system is a “monumental achievement,” said Land Use Committee Chair David Greenfield (D-Brooklyn), who is sponsoring the proposal in the Council. It would be the first time New York developers would be required to include affordable housing, and would cover builders seeking individual zoning variances.

Critics say the plan will yield a grossly inadequate amount of housing for people who make less than $40,000 a year—the people who need it most, and the majority of those in the neighborhoods currently slated for rezoning.

The city’s median household income, a bit more than $50,000, is well below the metropolitan AMI (which includes Rockland County, Westchester County and Putnam County), so people who can afford “moderate income” housing are actually in its upper half. 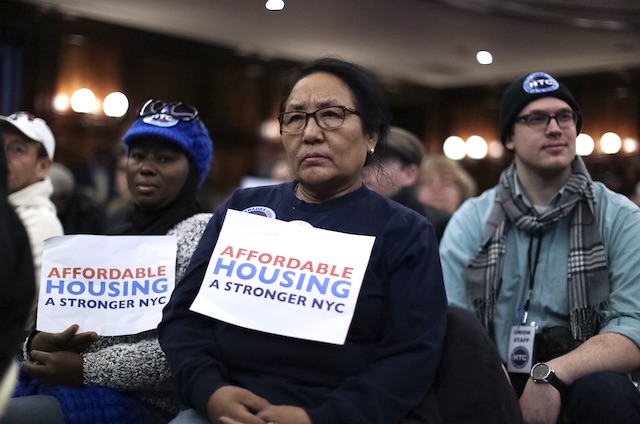 Councilmember Inez Barron, who represents East New York, held up a pie chart showing the difference: 53% of current residents make less than $35,000, but only 13% of the plan’s housing would be slated for them. More than half of it would go to households making more than $75,000, although only 14% of residents make that much.

Councilmember Antonio Reynoso said that in Bushwick, 40% of the residents make less than $31,000 a year, but only 7% of the housing built under the plan as is would go to people at that income level.

“Why aren’t we reaching the very incomes that reflect our communities?” subcommittee chair Donovan Richards (D-Queens) asked the trio of Deputy Mayor Glen, city housing commissioner Vicki Been, and City Planning Commission chair Carl Weisbrod. “We have a program that does not reach our populations.”

“Is it enough? Of course not,” Glen responded. But it is the best the city can do under the economic and legal circumstances, the administration argues. “This is the strongest, most rigorous program anywhere in the U.S.,” Glen told reporters at a roundtable discussion hosted by City Hall on Monday. “It’s not ‘Are you going to provide affordable housing?’ It’s, ‘You will provide affordable housing.’”

“The goal is to harness the private market,” Been told the reporters, and Glen used a similar phrase before the Council. If the percentage of lower-cost apartments is set too high or rents are set too low, the administration argues, developers simply won’t build, and “30 percent of zero is zero.” If the affordability requirements are “too onerous,” the program might face a property-rights challenge under the Constitution’s “takings clause.”

Some rents will be lower because the program’s affordability levels are averages, Been said. In this scenario, instead of all the affordable apartments in a building renting for $1,165, some might go for $775 and others for $1,550.

There are other subsidy programs the city can use to help poorer renters, she added, and getting the private market to build housing for more middle-class people frees up city funds for them. According to Weisbrod, in East New York, some sites will be “100% affordable housing,” with some rents as low as $450.

Gentrification is not going to stop, they say, as long as market pressures remain the same. In the “emerging markets” where landlords can get $2,300 a month rent, the program will "'lock in' the affordability of some units for moderate-income households," Been told the Council. "Don’t make the perfect the enemy of the good."

Glen added, "We are in a true housing crisis—and we can’t just sit by and do nothing as market pressures change the city."

But gentrification is built into the plan, says Tom Waters, housing policy analyst at the Community Service Society. For any affordable housing to be built, he explains, developers will have to be able to get rents of $2,300 and more in new buildings—and if the market in a neighborhood will support that, landlords of older buildings will try to get higher rents too.

The administration has pledged $76 million in legal assistance for tenants facing eviction. That won’t help tenants in unregulated apartments, however, because they have no legal right to renew their leases. And the state’s weakened rent-stabilization laws allow large increases on vacant apartments.

“I’m still hearing the same arguments as in the previous administration,” Public Advocate Letitia James said angrily. The Bloomberg administration’s rezoning of downtown Brooklyn promised affordable housing, she said, but “where are all the low-income residents in downtown Brooklyn? They’re in North Carolina, South Carolina. I get letters from them saying they couldn’t afford to stay." 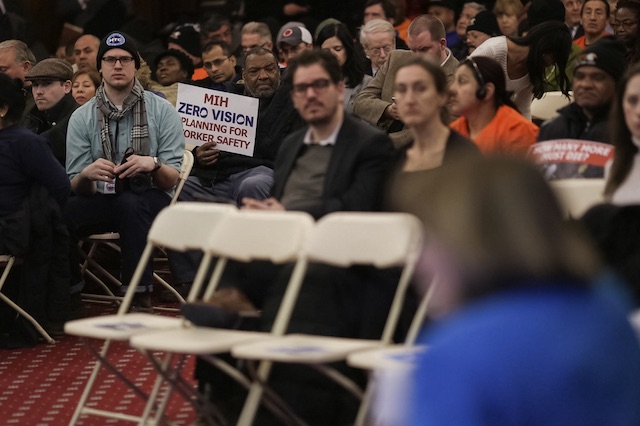 Two alternative proposals come from the Real Affordability for All coalition, which advocates requiring 50% of housing built to be affordable for people at or below the neighborhood median income, and the Association for Neighborhood Housing Development, which wants 15% reserved for people making less than $23,000, and a “deep affordability” option in which 30% of apartments would go to people with those incomes.

Failing to provide housing that cheap in Bushwick, said Jose Lopez of Make the Road New York, is “telling more than half the neighborhood you should find somewhere else to live.”

Building housing for people that poor, Glen said, is impossible without subsidies such as the federal Section 8 program, which has been curtailed to the point where the city closed it to new applicants in 2009.

“It’s expensive,” says Alexa Sewell, head of the Settlement Housing Fund, a nonprofit developer. A hypothetical 12-story building in the Bronx aimed at people making 30% to 90% of AMI would cost $55 million to build, she says, so it would need $20 million in subsidies up front. Costs per apartment are about $667 a month, so if tenants can’t afford that much rent, they need subsidies too.

Ultimately, the politics of this plan resemble those of Obamacare: A dispute between the Democratic center and the left, in which both sides agree on the need but disagree sharply on the means. The center relies on leveraging the market, insists that this is the only practical solution, and responds to critics with the mantra of “don't let the perfect be the enemy of the good."

The left believes that these solutions are grossly inadequate, whether they be a health-insurance policy that leaves people agonizing over whether the baby is sick enough to incur a $150 emergency-room copay, or a housing program that would leave hundreds of thousands of New Yorkers lamenting, “I don’t make enough to get into affordable housing.”