What Can NYC Do To Stop Small Businesses From Dying Out?

The bill, sponsored by Ydanis Rodriguez (D-Manhattan) and 22 other Councilmembers, would require landlords to tell commercial tenants 180 days before their lease expires whether they intend to renew it or give a legally valid reason why they wouldn’t. Tenants would have the right to get a 10-year lease, and could demand arbitration if they believe a rent increase is too much.

New York City’s supermarkets are “dwindling,” Nelson Eusebio of the National Supermarket Association told the panel, asserting that “the biggest change has been the rent.” When landlords double or triple the rent, he said, “we can’t deal with it”—or at least not without raising the price of a can of beans from 99 cents to $3. He cited the former Met Food in Little Italy, which closed in 2016 after 25 years when its rent was raised from $90,000 a month to $115,000.

The owner, a Dominican immigrant, is now running a small corner store in Brooklyn, Eusebio added.

Similar legislation has been introduced periodically since then-Councilmember Ruth Messinger proposed it in 1986. "Thirty-two years is an unacceptable amount of time for New York City to admit there is a problem," Messinger told a rally of supporters outside City Hall before the hearing.

This year’s version is expected to pass the Small Business Committee, as four of the five members—all except chair Mark Gjonaj (D-Bronx)—have signed on as cosponsors. Despite the 100-odd protesters who filled the room holding “Pass SBJSA Intact” signs, Johnson said it is unreasonable to expect that the measure won’t be amended.

Both the de Blasio administration and the real estate lobby are against the bill. Real Estate Board of New York (REBNY) chair John Banks said he “vehemently” opposed it.

“We are concerned about the potential unintended consequences,” city Small Business Services Commissioner Gregg Bishop testified. The arbitration process, he said, would favor landlords and large corporations with the resources to prepare a case, it wouldn’t help businesses that don’t have leases, and an “onerous lease-renewal process” might encourage landlords to avoid giving leases entirely.

“I don’t think there’s a silver bullet,” Bishop replied when asked by Johnson what could be done about “vibrant, viable” small businesses such as the Tortilla Flats restaurant in Greenwich Village or the McNally-Jackson bookstore being forced out by massive rent increases. He said the administration would support creating a registry listing vacant storefronts and enacting a tax on them if they stay empty long enough.

Bishop also said the city Law Department has unspecified concerns about possible legal problems with the bill. The New York City Bar Association issued a report last month that said the SBJSA’s giving commercial tenants the rights to a 10-year lease and binding arbitration were “tantamount to rent controls,” and thus would require authorization from the state legislature.

“This is not about commercial rent control,” Rodriguez insisted. “This bill is the only one that can establish a better process for lease renewal. It’s the only real solution to stop the closing of long-established small businesses and save jobs.”

“There is nothing in this bill that says the government creates the amount of rent for commercial spaces,” said James Klein, a lawyer affiliated with Friends of SBJSA. “People use that kind of argument to shut down substantive discussions.”

REBNY’s Banks had a different take. “Are the rents able to fluctuate in the free market under this legislation?” he asked, as a couple dozen supporters in blue “Vote No Commercial Rent Control” baseball caps sat in the audience. If they can’t, he said, it’s rent control—and “you can be sure we will challenge it.” 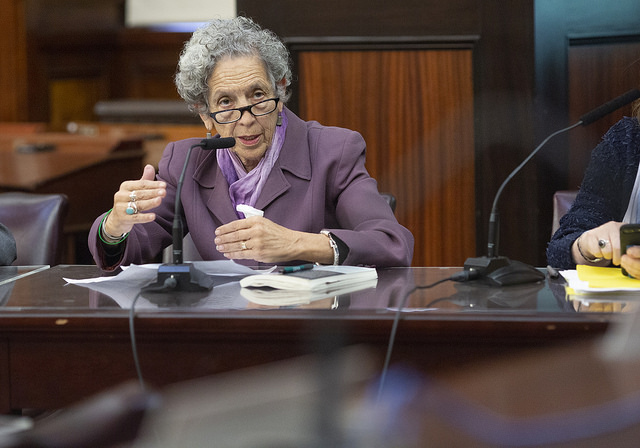 Former Manhattan Borough President Ruth Messinger, who first introduced a version of the SBJSA as a Councilmember in 1986, testified at Monday's hearing in favor of the legislation. (John McCarten / City Council)

Speaker Johnson wondered, what should the city do when rents on successful businesses are doubled or tripled? Banks suggested giving them a gradually phased-out tax abatement. When Johnson said that having 150 vacant storefronts in Greenwich Village “does not seem normal or healthy,” Banks replied that the Speaker didn’t understand retail markets.

The Douglas Elliman brokerage firm told the Times last month that a survey they conducted showed that 20 percent of storefronts in Manhattan are vacant, up from 7 percent in 2016, though that survey has never been released to the public.

Some real-estate witnesses had no problem with massive rent increases. “The market is working,” said Steve Soutendijk, a retail broker with Cushman & Wakefield. “It’s imperative we let the forces of supply and demand do their job.” “Big rents translate into tax dollars,” said Joanne Podell, the firm’s executive vice chair. “Self-regulation can be painful, but it really works.”

“Some advocates may not want to hear this, but this is not a perfect bill. Some changes need to happen,” Johnson told the hearing.

The question is what kind of changes. “The rumor is that they’re going to water it down to worthlessness, and pretend they’re doing something for small businesses,” Red Eye Coffee co-owner Marni Halasa told Gothamist at a rally before the hearing. She and her husband pay $3,800 a month for a 130-square-foot space on Ninth Avenue, and, facing an increase of at least $400, fear they’ll have to close.

One likely change would be narrowing what businesses qualify for protection. The bill’s current draft covers all commercial tenants from a tiny bodega to the offices of a Wall Street law firm, numerous witnesses and Councilmembers pointed out. But if “small business” were defined as one renting less than a certain amount of space, Gjonaj said, that would not distinguish between a Starbucks or Dunkin’ Donuts and a 500-square-foot neighborhood coffeehouse.

Kirsten Theodos, cofounder of TakeBackNYC, a coalition supporting the SBJSA, told the committee she would be “open to changes as long as the bill still has teeth.”

Unlike the 2009 version, which was sponsored by 32 Councilmembers, this one has not yet had a majority of the Council sign on. That will probably change. "I am becoming more sympathetic," Councilmember Andrew Cohen (D-Bronx) told the hearing, saying vacant storefronts are a problem on every commercial strip in his Norwood-Kingsbridge-Riverdale district. And also unlike 2009, when an increasingly real-estate-beholden Speaker Christine Quinn refused to bring the bill to the floor, Corey Johnson at least supports the concept of the city putting restrictions on landlords to protect small businesses.

Ian Ford, a veteran DJ who opened the Caffeine Underground coffeehouse in Bushwick last year, says that between the loans he took out, the unexpected repairs he needed to do, and his rent, he’s $300,000 in the hole, and “five years isn’t enough to recoup that. I need a ten-year lease.”

Almost every club he DJ'd at got “priced out when the landlord tripled the rent,” he says. He supports the SBJSA for two reasons. “From the numbers, I’d like to see a good return on investment. From the heart, I’d like to see culture remain alive in New York.”