What Bratton Isn't Telling You About Broken Windows

NYPD Commissioner Bill Bratton just co-wrote a 4,500 word defense of Broken Windows policing for City Journal, the organ of the conservative Manhattan Institute. It sneers at "ivory tower studies" which "fail to grasp how crime is managed" and claims "Broken Windows is a highly discretionary police activity." The evidence shows otherwise.

Before they try to explain how Broken Windows has cleaned up this filthy town ("On your left, a prostitute smoking crack in broad daylight") Bratton and his co-author, George Kelling—who helped coin the phrase "Broken Windows" in the early '80s and who is currently on the NYPD's payroll—want you to know that their policy has nothing to do with that other other policy that was deemed unconstitutional last year and fueled the fury that propelled Mayor de Blasio into office.

One confusion should be cleared up at the outset: the policing tactic known as stop, question, and frisk (SQF) is entirely distinct from Broken Windows….Unlike SQF, Broken Windows policing is not a tactical response based on reasonable suspicion of possible criminality. Rather, it is a more broadly based policy mandating that police will address disorderly illegal behavior, such as public drinking and drug use, fights, public urination, and other acts considered to be minor offenses, with responses ranging from warning and referral to summons and arrest.

In fact, stop and frisk was being used as a broad-based policy to address illegal behavior "with responses ranging from warning and referral to summons and arrest." The NYPD stopped millions of people during the Giuliani and Bloomberg eras, 86% of them black or Hispanic; 88% were completely innocent, and only 6% of the remaining stops resulted in arrests.

New Yorkers were repeatedly warned by Mayor Bloomberg and the police commissioner that reducing stops would court danger. It took widespread condemnation, a federal court verdict, and a mayoral election, but they were proved wrong: police stops are down 90%, and crime rates continue to fall.

Are those arrests any more effective at stopping or slowing crime than the millions of pointless stops that were supposedly essential for preventing anarchy?

According to a recent report by the John Jay College of Criminal Justice [PDF], 38.5% of all misdemeanor arrests in New York City are dismissed at arraignment. The DAs decline to prosecute another 7.6% of them. Bratton and Kelling fail to mention that close to half of misdemeanor arrests under Broken Windows don't stick. Does that sound like a "highly discretionary" policy? 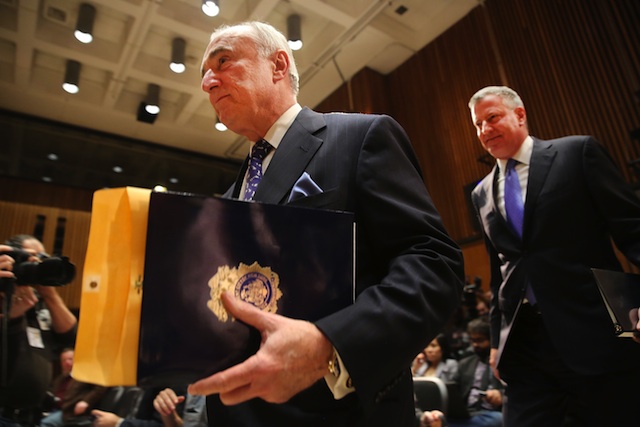 Some misdemeanor arrests are unnecessary and of limited utility. The NYPD recently drew that conclusion about a specific category of marijuana arrests—for possession of small amounts of the drug in plain view. The NYPD—working in collaboration with Mayor de Blasio’s office, the courts, and the city’s five district attorneys—determined that the order-maintenance value of these arrests was low, while the cost in police time and resources and community concern was high.

Last year low-level marijuana possession made up 15.4% of all misdemeanor arrests (in 2000 it was more than 27%), and through much of 2014 de Blasio's NYPD made more low-level marijuana arrests than his predecessors. In March, Commissioner Bratton told the City Council, "The idea of decriminalizing marijuana, I think, is a major mistake and something I will never support."

What made Bratton change his mind? A rethinking of his sacred Broken Windows credo? More likely it was an angry public tired of stamping criminal records on otherwise innocent people (74% had no prior criminal record) for possessing a plant that had been decriminalized since 1977. The NYPD knows what's best for us, except when it doesn't.

This is a laughably simplistic way of looking at crime—which could be used interchangeably in this context with the word "society." Commissioner Bratton clearly knows better. Here's what he said over the weekend in response to a question about the social unrest the city has been experiencing: "This is about the continuing poverty rates, the continuing growing disparity between the wealthy and the poor. It's still about unemployment issues. There are so many national issues that have to be addressed that it isn't just policing, as I think we all well know."

Even fare evasion, frequently cited as the prototypical “victimless crime,” is anything but. The New York City subway system is a hugely subsidized enterprise, and it needs every penny in fare revenues that it can raise. In aggregate, the minor crimes of stealing $2.50 at the turnstile add up to a colossal theft. Further, the NYPD does not arrest the casual fare evader who jumps the turnstile once. Three of every four fare evaders are issued summonses. Only recidivists, including chronic fare evaders, wind up arrested.

This last point—that only the truly "bad" or "chronic" criminals are ensnared by this policy—is demonstrably false. Ask the teenager Michael Greenberg met who was afraid his college aid would be revoked because he was arrested after a woman gave him a MetroCard swipe. Or the young man arrested for having his backpack on a subway seat; or the man who was arrested for sleeping on the train after a 4 a.m. work shift; or the public housing residents who are harassed or thrown in jail while waiting for a pizza.

"Ironically, although the police are apparently taking the step as a part of a protest, the work stoppage does represent the direction that we and other reformers have been advocating in terms of NYPD practices," says Bob Gangi, the director of the Police Reform Organizing Project, referring to the NYPD's recent refusal in some precincts to write summonses or make arrests for low-level offenses. Gangi's group often observes arraignments for New Yorkers charged with misdemeanors and publishes their stories.

"Also it is very possible that some police officers, because they are not comfortable with Broken Windows policing, and see it in fact as the kind of policing that increases the risk to their own well being, welcome the opportunity to use the work stoppage as a kind of cover to engage in the kind of policing they would prefer to do."

As John Jay College of Criminal Justice professor and former NYPD officer Eugene O'Donnell told us last week: "Loose cigarette enforcement is a lunatic mission, that no cop ever joined the NYPD to be part of."

#Bill Bratton
#broken windows
#Crime is complicated
#George Kelling
#original
Do you know the scoop? Comment below or Send us a Tip