What Are Those Nitrogen Tanks Doing On NYC Sidewalks?

Over the past 15 years, we've received a lot of questions about this strange city we live in. Hands down, the one that has come up the most is in regards to those nitrogen tanks that you may have seen on sidewalks. What's their deal? Let's find out.

Those shiny tanks can certainly be an alarming sight—back in 2008 one reader told us they "are always bubbling and oozing," asking, "Are they dangerous?" And more importantly: what are they even doing there?

A number of theories have been floated around on the internet regarding the reason for their existence—some of our favorites: they were there to asphyxiate rats, to reduce odors, and to scare off tourists. The reality is that Verizon uses liquid nitrogen to maintain cables and fiber bundles. Verizon spokesperson Raymond McConville recently demystified it for us:

The nitrogen tanks you sometimes see on the New York City streets may look alarming, but they're completely safe. The tanks are there to keep our copper phone/data cables dry while we make repairs. Copper cables can fail when they are exposed to moisture, and in the complex underground labyrinth of the Manhattan streets where you have electric lines, water mains, subway tunnels, and especially the steam system, it's not always possible to keep our cables safe from the elements.

So sometimes, when our crews are fixing a copper cable, we'll use the nitrogen tanks to pump dry air onto those cables while we make the repairs. The nitrogen dries out the moisture and in most cases allows us to maintain service to customers while were making the permanent fix. The length of time varies depending on the congestion of the manhole and the availability of the conduit system contained within the manhole. Usually that fix involves repairing the failed section of copper, or replacing it with fiber optics.

The need for the tanks has decreased since we last covered this in 2008, due to the introduction of Fios. According to Raymond McConville, "Fiber cables have no sensitivity to water, so as we've modernized our communications network and laid more fiber in the streets of NYC, the need for these complex copper repair jobs and nitrogen tanks has decreased." 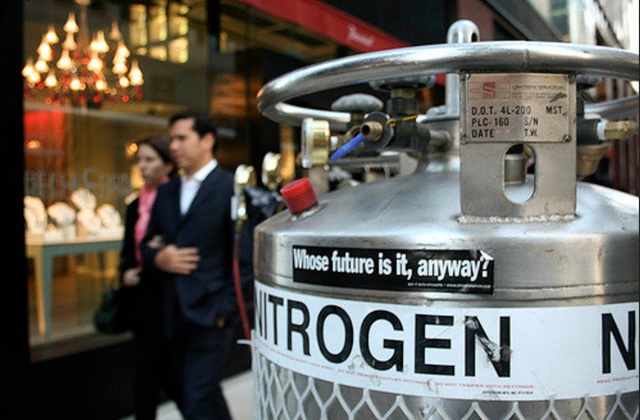 You'll still see them out there, though (there are typically anywhere from 10-15 tanks deployed on a daily basis), particularly around areas where there's some steam buildup—"When there's a problem with the steam system we'll keep the nitrogen tank in place to keep our cables dry and maintain service until Con Ed makes its repairs," we were told.

Okay okay, but are they going to blow up or something? No. We are told that "the tanks pose no threat to the public. In the past we've had cars back into them but when that happens, the car suffers the most damage."

We hope to demystify more NYC curiosities in the future, so if you're curious about anything you've seen around the city, send us an email at tips@gothamist.com or tag your questions #AskGothamist on Twitter.

#explainer
#nitrogen tanks
#nyc explainer
#verizon
#original
Do you know the scoop? Comment below or Send us a Tip