What Alec Baldwin Does During the Writers Strike 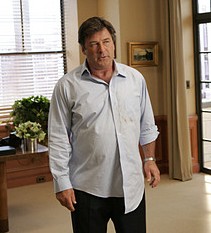 While 30 Rock writers are on the picket line, Alec Baldwin is worried about his neighborhood.. And listening to the Brian Lehrer Show on WNYC. This morning, during a segment where Brian was discussing the future of NYC's streetscape with Department of Transportation Commissioner Janette Sadik-Khan and the Open Planning Project's Mark Gorton, the acclaimed actor and gossip target made his debut as a caller. After joking that he needed a job, here's a transcription of what Baldwin says:

I just wanted to mention quickly, having lived on the Upper West Side for many years, and really enjoying it by and large because it's bordered by two great parks and there's a lot of low buildings there...so the light is so spectacular, as opposed to a lot other parts of New York. I mean, one of the reasons I stay on the Upper West Side is the light...it's such great light there.

I wonder what the people who are guests on the show think of the fact that you can take all of the cars you want to off the road, but I think the Upper West Side is one of the dirtiest parts of New York. And I really think that there's so many bars and kind of mid-priced restaurants there, and I find that the Upper West Side is not...where you see the Central Park Conservancy taking care of the Park or the Doe Fund for the Broadway malls, but Amsterdam Avenue is still pretty horrible...Is there any way the city can really really improve enforcement of the owners of these building to take care of what's outside of their buildings?

Brian gently suggested that maybe Alec wants to chat with the commissioner of the Department of Sanitation, but DOT Commissioner Sadik-Khan said she understood Alec's concerns and also mentioned that there is an inter-agency initiative to work on bettering the streetscapes. We wonder if the city can employ Alec Baldwin as some sort of enforcer, scaring bar and mid-priced restaurant owners into cleaning up their acts. He doesn't need to leave his house - he can just leave phone messages. Anyway, the cleanest streets in the city belong to Staten Island.

Sadik-Khan and Gorton were on the program to mention this evening's Upper West Side Streets Renaissance workshop tonight (here's video of what a streets renaissance can look like). And that Girl's Guide to Hunting and Fishing adaptation starring Sarah Michelle Gellar and Baldwin is headed straight to video in January.