Whale Population in NYC Proves to Be "Extraordinary" 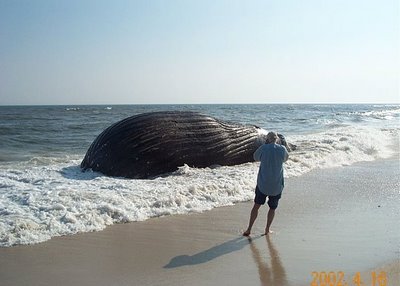 Some big news on the off-shore population in NYC: scientists have discovered an impressive amount of whales "only a couple of miles from the Statue of Liberty," the NY Post reports.

"This isn't exactly great real estate for whales," said Dr. Christopher Clark, director of bioacoustics research at Cornell's ornithology lab. "It would be like trying to make a home in the middle of the Long Island Expressway."

When Clark's team placed three buoys with microphones a few miles from Kennedy Airport and another seven off Jones Beach, they expected to hear some whales, but were struck by the fact that there were hundreds - rights, fins and humpbacks - some commuting and others making their home near the city.

For the most part the mammal's songs are drowned out by our own city noise, but Clark (who calls the discovery "extraordinary") says it is possible to hear them--and the Bioacoustics Researchers and State Department of Environmental Conservation plan to keep the listening stations running year-round.

Clark added that, "These are some of the largest and rarest animals on this planet trying to make a living just a few miles from New York's shores." While it's a nice idea to have an underwater choir surrounding NYC, there is a lot of ship traffic coming through the harbor and whales are getting run over--something researchers hope to put an end to by studying their travel paths. In addition, the new information can now help policymakers develop management plans to protect the whales--which is particularly important due to the presence of the right whales, which are endangered.

Photo of a humpback whale beached on Fire Island circa 2002, via Moneyries.